A NEST OF HIGH STATE INTRIGUE?

THE PAPER TRAIL TO DATE

During the working week of 13 to 20 July, the situation went from local government insisting all the human remains must be removed for anthropological study, to an international protest initiated by Lithuania’s chief rabbi, Rabbi Chaim Burshtein, with a Facebook post that rapidly garnered over 1,200 shares. The rabbi sent a version to the nation’s top leaders as well. Once the English version of Rabbi Burshtein’s post appeared in Defending History, it was picked up by JTA, and by midweek, authorities relented and agreed to leave the grave untouched, though Defending History’s reporter found the anthropologists hard at work disturbing the bones on Friday 17 July (no staff, reps or other traces were to be seen of the CPJCE Londoners who were long gone, having had their press release).

The chronology appears in our reporter’s eyewitness report. Of course, the rapid visit to Lithuania in the middle of all this by the London-based CPJCE (Committee for the Preservation of Jewish Cemeteries in Europe) no doubt helped as well, as did a powerful statement by Faina Kukliansky, chair of the Jewish Community of Lithuania.

But instead of seeing joint effort, the CPJCE’s press release claims a unilateral “success” with all the trappings of Hollywood PR, and without even mentioning the existence of Lithuania’s chief rabbi, the more than 1200 Facebook shares he rapidly achieved, the DH and JTA coverage, and the subsequent climbdown.

What is much more potentially sinister is the CPJCE’s ongoing facilitation, against virtually all other rabbinic authorities’ views  — arguably in effect in return for “supervision payments” — of the old Vilna Jewish cemetery at Piramónt (in today’s Šnipiškės). In 2009, an American ambassador’s report to Washington (published by Wikileaks) refers to $100,000 needed to pay CPJCE to supervise some “beautification” and “exploratory digging” that should never happen in a Jewish cemetery. But now, in 2015, the exact same London rabbis are being wined and dined by the prime minister of Lithuania for giving their blessing to the erection of a twenty-five million dollar convention center in the heart of the old cemetery. The question arises: What will their fees be this time? Will transparency demand full and rapid disclosure?

The project they have blessed, construction of a convention center in the heart of Vilna’s old Jewish cemetery, has been condemned by (among many others) the chief rabbi of Lithuania (the same one that they wouldn’t mention in today’s press release about Shavl), the country’s chief Vilna Gaon expert, a Holocaust survivor, the Simon Wiesenthal Center, a Protestant pastor, as well as numerous rabbis internationally, including the Central Rabbinic Congress in New York, the Vilna Gaon Synagogue in Tel Aviv, and the top Lithuanian-origin heads of yeshivas in Israel. 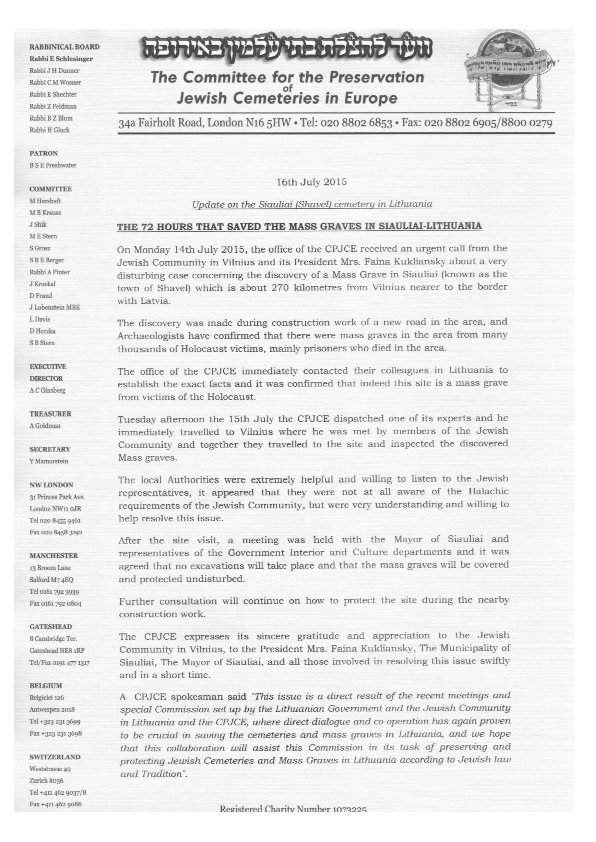