What’s The Story With the Mass Grave Uncovered near Šiauliai (Shavl)?

Last week, there was a flurry of reports in the Lithuanian media about human skeletons and personal effects turning up during routine roadworks at Pročiūnai in the region of Šiauliai (in Jewish history: Shavl). Reports and gory pictures appeared among other places in 15min.lt; Etaplius.lt; Skrastas.lt and Snaujienos.lt. I myself, a concerned resident of Šiauliai, commented on the subject on my own blog (here and here). Various articles published contained theorizations about the buried here being victims of Soviet crimes or even equally of Nazi and Soviet crimes.

Monday 13 July. It is probably correct to say that the international scandal was set alight when the “routine” BNS (Baltic News Service) report appeared in English in the Lithuania Tribune (amalgamated with English Delfi). The archaeologist placed in charge by the local government of the investigation of the human remains, Audronė Šapaitė, is quoted in the article as presenting the following certain conclusions. Excerpts follow:

It’s been decided to excavate the remains, do anthropological tests and then rebury them and also mark this place. […]

Reacting to the Lithuanian as well as the English report, Lithuania’s chief rabbi, Rabbi Chaim Burshtein, published a condemnation the same day, Monday 13 July on his Facebook page. The chief rabbi’s post  (in Russian) was shared by 1,225 of his followers. In addition a version sent on letterhead of the Jewish Community of Lithuania was sent to the president, prime minister, and top officials of cultural preservation departments. A version of the same statement in English appeared in Defending History on 14 July:

Defending History’s report was rapidly picked up by JTA (Jewish Telegraphic Agency) and thereby disseminated to dozens of publications worldwide.

Wednesday 15 July 2015. The chief rabbi’s protest is incorporated in a press release by the prime international organization that defends Jewish cemeteries, mass graves and other burial sites from desecration, the Jerusalem-based Asra Kadisha (the name is Aramaic for “holy place”). Rabbi Lazar Stern, New York chairman of Asra Kadisha issued a press release that was widely published, including in Lithuanian English-language media Baltic News Service (BNS) and News.lt.

Thursday 16 July 2015. Under the headline “U-turn on excavation of WWII Mass Grave in Šiauliai,” a new BNS report ensured a climbdown by authorities. According to the BNS report,

Martynas Šiurkus, deputy director of administration at Šiauliai Municipality, said the decision was made to show respect “for all ethnic groups’ traditions and customs.”

“Šiauliai City Municipality assures that (…) no land digging work will be done until proper respect is guaranteed for the remains buried in the mass grave,” Šiurkus said in a statement on Wednesday.

The same BNS dispatch reported that Jewish Community Chairperson Faina Kukliansky had publicly backed up the chief rabbi’s position in a statement a day earlier:

“Jewish interests have been satisfied since there’s a cultural difference and a different requirement to show respect for the dead. On the other hand, I would still want some concreteness from the municipality since there’s no guarantee at all that more remains would not be found during the construction work,” she told BNS on Wednesday [15 July].

In her own statement released on the website of the Jewish Community of Lithuania, Jewish community chairperson attorney Faina Kukliansky wrote:

If construction is taking place, who wants to drive on a road over corpses, or to build a home and later discover people who were brutally murdered are buried in the yard? And now we see from the remains which have been exhumed that many of the victims were children. This is a tragedy which deserves commemoration, not construction projects. The unexpected could have been avoided if there had been a more thorough examination. Of course we will acquaint ourselves with all of the historical material and determine how this project was born. This is not some sort of Jewish  caprice or exceptional demand, it is required by law: to inventory all cemeteries and mass murder sites by 2012 and legally register all such plots of land. The deadline for performing this work has been extended until 2016. The law just needs to be carried out and we will avoid terrible misunderstandings. This episode demonstrates how the Government with the municipality of Šiauliai and the Cultural Heritage Department solves problems when they stand together and seek a solution. I am pleased to note no interference from abroad is needed.

A balanced account of events, duly crediting both the chief rabbi and the head of the community, appeared on the Jewish Heritage Europe website.

Friday 17 July 2015. An additional series of contacts were reported and claims for credit for success made in a press release disseminated by the controversial London-based CPJCE (“Committee for the Preservation of Jewish Cemeteries in Europe”), a contentious organization implicated by a 2009 State Department memo published by WikiLeaks in being effectively paid off for concessions regarding Vilnius’s old Jewish cemetery in Šnipiškės (Piramónt in Yiddish). Last April, the group was lavishly welcomed by Lithuania’s prime minister when it gave “permission” for a controversial new convention center being planned for the heart of the old cemetery (see narrative and paper trail).

The CPJCE press release did not mention the initial protest by Lithuania’s chief rabbi and somehow sought to achieve sole and unique PR credit for “Šiauliai,” perhaps as a counterweight to its rapidly deepening troubles in “Vilnius”….

Also on 17 July 2016, I decided to personally visit the site again and see what’s what. So I headed out to Pročiūnai, in the Zokniai airfield territory, in the region of the city Šiauliai.

From a distance I could see an excavating machine standing stationary, apparently with nobody operating it. But as I drew closer I could see that the grave was entirely open, and there were some people there. Astonished, I decided to take some photos. 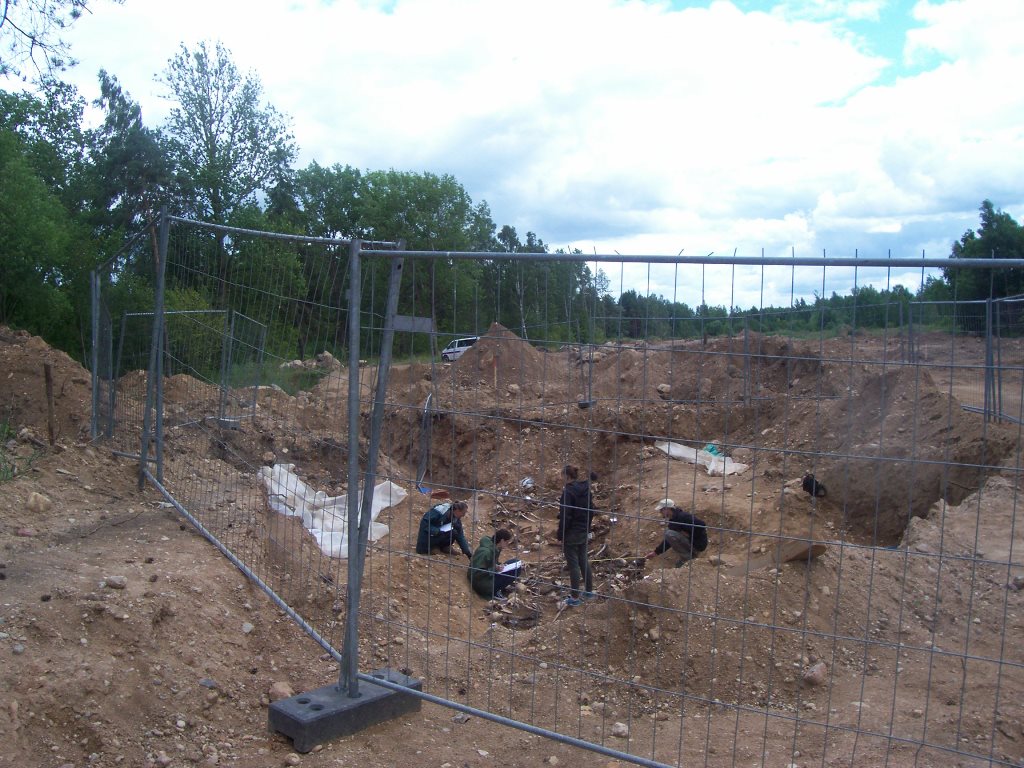 I recognized archaeologist Audronė Šapaitė, who had at the outset informed the media of her (and her unit’s) decision to remove all the human remains for an anthropological study, prior to the U-turn reported midweek after Rabbi Burshtein’s public protest.

I asked the people deep inside the hole: “What are you looking for?” Ms. Šapaitė herself replied: “We are doing anthropological research and are trying to record artefacts. Tomorrow, on Saturday they are going to cover everything with sand.”

I was interested to know if she thought it was a Holocaust-era burial place or something different or newer. According to her opinion, it was later. We began to discuss who those victims could be.

But according to the late Leiba Lipschitz, 340 Jews were killed right here.

At the same time when the local Jewish men were being arrested in 1941, the Military Field Police captured twenty to thirty of the most prominent Šiauliai (Shavl) Jews, using lists made by a committee of the city authorities. The arrested, who were the Jewish community’s spiritual leaders, well-known intellectuals, and the most affluent businessmen, were imprisoned as hostages. It was announced that they would be “liquidated” if Šiauliai Jews offended the Germans. Among the hostages were the Shavl Chief Rabbi Aron Baksht; the dáyen (religious judge) Abraham Itzik Nochumanski; Rabbi Samuel Rabinovitch; teachers Mordechai Rudnik, Leib Chaitin, Meyer Shub, Hebrew gymnasium principal Joseph Rudnik, lawyers Israel Abramovitch, Hirsh Rachmil, and Dr. Getz, traders Simon Rosenberg and Kadish Shapiro, and customs expeditor Elijah Pen. A few days later they were shot in a forest at the village of Pročiūnai, in the Zokniai airfield territory. The pretext for the execution was a Nazi-spread rumor that Jews had fired at some Wehrmacht soldiers. (Actually, the drunken German soldiers started shooting among themselves.)

The more recent report of the International Commission for Evaluation of the Crimes of the Nazi and Soviet Occupation Regimes reveals how prisoners from Šiauliai prison were taken to slaughter at the village of Pročiūnai:

I made attempts to interest our local museum in Šiauliai in constructing a list of the victims, but there was no interest in my suggestion.

But now, after the recent international attention, we expect that Šiauliai Local Government will set up a historical research effort that will reveal more names…. We hope that unfulfilled request of the relatives, conveyed to the Soviet commission back in 1944, finally will be implemented:

People, whose relatives and siblings are buried here, ask to sign and build an honorable memorial for the victims. [The original document is in Vrublevskis library of Lithuanian Science Academy, F. 159, RK-30, l. 1, 1a, 2, 2 r. (Documents of Special Soviet Commission)]

But the promise to respect the remains is not yet kept. Specialists continue to toy with the remains and the site is left insecure overnight.