Posted on 22 January 2013 by Defending History


The small courtroom in the building of the Lithuanian Supreme Court a few yards away from the nation’s Seimas, or parliament, was packed with journalists and mostly older generation nationalist opponents of Algirdas Paleckis. Two judges, speaking in different sections, upheld the earlier verdict against him for having proposed a version of events for January 13th 1991 that is at odds with national historiography.

If there were any observers on hand from human rights organizations or Western embassies, they were not known to those journalists approached at the scene by Defending History.

Mr. Paleckis has been tried under a 2010 statute which has in effect also served to promote Holocaust Obfuscation by making the opinion that there was only one genocide in Lithuania illegal.

This journal’s views were expressed in an earlier editorial, in 2011. Since then, Defending History has expressed admiration for Mr. Paleckis’s courage in speaking out on issues of the Lithuanian Holocaust (particularly against the glorification of the perpetrators of 1941), antisemitism and state hypocrisy, without in any way agreeing with his narrative of 1991. In any case, Defending History steadfastly supports the notion that the peoples of the “new” parts of the European Union and NATO should have the same standards of free speech and freedom expression as all others. 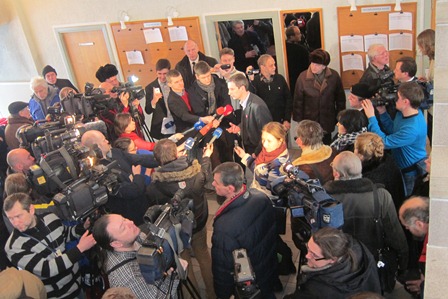 Paleckis’s party, the Socialist People’s Front, issued a statement immediately after the court’s confirmation of the earlier verdict stating that an appeal would be made to the European Court of Human Rights in Strasbourg.

The following was Defending History‘s front page box summary coverage prior to today’s hearing. It now appears that the case’s importance will not be more widely recognized until the run-up to the Strasbourg appeal. 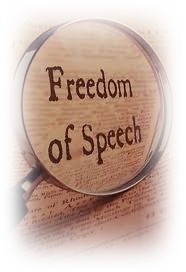 Is Orwellian obedience to a single state-approved version of history now a matter for the courts in the Eastern EU? If so, what kind of free thought can be expected from new generations of historians, intellectuals, artists?

The trial of Algirdas Paleckis goes to the supreme court at 1:30 PM, Tuesday 22 Jan. 2013, at Gynėjų Street 6, Vilnius, near the nation’s parliament. Everybody welcome.

STANDING UP FOR FREE SPEECH AND OPPOSING AN ANTI-DEMOCRATIC LAW DOES NOT IN ANY WAY IMPLY AGREEMENT WITH THE VIEWS OF THE INDIVIDUAL ON TRIAL.

BACKGROUND: The far-right 2010 “red-brown law” and the 2009 statement of its real motives; Jewish community responds; Leonidas Donskis on the criminalization of debate; When Algirdas Paleckis spoke out at a 2011 “whitewash conference” on antisemitism; Dovid Katz on earlier Paleckis trial, and in reply to Rokas Grajauskas.

Questions: Will foreign embassies, human rights watchdogs, emissaries of the arts and media and politics and academia (especially the ultranationalist operatives who came up with the 2010 Soviet-style criminalization-of-debate-law in the first place) turn up to monitor the progress of Free Speech in NATO, the European Union and the OSCE? Where is the Human Rights Monitoring Institute (that was so quick to misapply the term “Vilnius Ghetto” for a non-genocide, non-analogous situation)? Where is the Lithuanian Human Rights Association (that was so quick to defame Holocaust survivors)?

The Bigger Question: Do the people of the newer member states of NATO and the European Union deserve Western standards of freedom of thought and speech?

This entry was posted in EU, Human Rights, News & Views, Politics of Memory. Bookmark the permalink.
↑ Return to Top