Posted on 30 December 2018 by Defending History

JERUSALEM—In a letter dated today, and released to the media, Israel’s Minister of the Interior Rabbi Aryeh Machluf Deri appealed to the director of the Foreign Ministry to take serious action concerning the threat of desecration to the old Vilna Jewish Cemetery at Piramónt (in today’s Šnipiškės section of modern Vilnius).

The letter calls for the Foreign Ministry’s “immediate intervention” and cites the pain that would be caused to world Jewry by pursuit of the current project planned for the site.

The letter makes mention of the many luminous Jewish scholars buried at the old Vilna Jewish cemetery. As an example, Minister Deri refers to the “Cháyey Ódom” (Hayéi-Adám), the popular moniker for Rabbi Abraham Dantsig (1748–1820), whose most famous work (from which his own popularly used name derives) continues to be studied in Jewish religious schools and academies around the world on a daily basis.

Minister Deri’s appeal to Lithuanian authorities to spare the sacred burial space follows upon last September’s appeal from ten members of the Israeli Knesset. This week, the international petition calling on the Lithuanian government to move its projected new convention center project to another location and restore the old cemetery approaches the 45,000 signature mark. It was launched by Vilnius native and resident, Ruta Bloshtein. 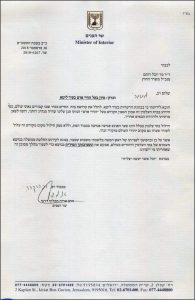