June 23rd 2021: 80th Anniversary of Outbreak of the Lithuanian Holocaust


When “white-armbanders” and LAF followers began to injure, plunder, humiliate and (in 40 locations) murder thousands of Jews across Lithuania (before arrival or set-up  of the first German forces or their setting up their rule)

Will the state and its “history” units finally honor the victims or again perpetuate the far-right pro-fascist false history that this was some minor crossfire in a “great revolt against the Soviets”?  The Soviets were fleeing Hitler’s Operation Barbarossa, the largest invasion in human history — not the local white-armbanded Jew killers. 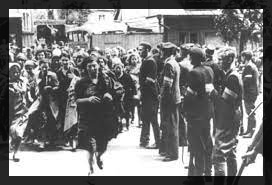 A freedom fighters’ revolt? Hitlerist white-armbanders surround Jewish women being marched to their death. These militias, responsible for deaths of Jewish civilians in forty locations in Lithuania prior to German arrival, are honored by the state as “freedom fighters”….

The 23rd of June 1941 is the date remembered by Lithuanian Jewry as the outbreak of the Holocaust with onset of  widespread murder, dehumanizing degradation and humiliation of civilian Jewish neighbors by the “white armbanders” and “LAF” forces (whose pamphlets declared explicitly their plans for their nation’s Jewish citizens). But instead of honoring the victims, the state’s far-right historians-in-tow glorify the perpetrators as “anti-Soviet rebels,” a well known historic nonsense: the Soviet army was fleeing Operation Barbarossa, Hitler’s invasion of the USSR, the largest invasion of human history, not the local Jew-killers with their white armbands. More on the historic background of the Double Genocide revisionism that has evolved into 21 Century Holocaust Denial.

And who will honor the real Lithuanian heroes of 1941 — the amazing, inspirational folks who risked everything to just save a neighbor from the LAF and Hitlerist hordes of the hour?

Another “conference to fix things”

A state-sponsored conference to mark the 80th anniversary of the onset of the Lithuanian Holocaust fails to include a single scholar who has dissented against state-sponsored glorification of 23 June and its killers (as some kind of glorious “revolt”) as usual using “useful  foreign Jews” (who enjoy luxury junkets banquets, grants  and honors) to legitimize the absence and thereby seek to make the new Holocaust obfuscation respectable (again, one elder-statesman genuine hero of historic truth telling is brought as an end-of-conference ornament to speak on matters far from the meaning of 23 June in Holocaust and European history). Among the eminent scholars to attend the conference is New York’s Prof. David E. Fishman, an erstwhile critic of Lithuanian government Jewish issue policies who made a dramatic about-face. in the context of Yivo’s massive investment in the country’s imaging efforts.

The  conference program. Defending History’s take? Scholars of conscience would not share a podium with the Genocide Center director who on last year’s June 23rd addressed far-right and neo-Nazi supporters under a banner of two major Holocaust collaborators. He has since been rewarded with the directorship of the center. Beware useful idiots being brought as hapless kashrus stamps for the 21st century incarnation of Holocaust Denial (via obfuscation, Double Genocide, state glorification of perpetrators and lavish “Jewish” programs and one-sided conferences artfully framed to shut down rather than inspire debate).

Will conference participants schedule an event to visit the Vilnius street named for June 23rd and reflect on its implications on the eightieth anniversary thereof?

See the late Professor Leonidas Donskis’s 2010 essay on plans for an analogous conference planned for the 70th anniversary of the events a decade ago.

Will the EU ask Kaunas to take down its street names and plaques glorifying Hitler collaborators before the city’s 2022 stint as Capital of European Culture?

Kaunas Garage massacre. Incredibly, the Lithuanian parliament named the year 2021 (80th anniversary of the events) in honor of one of the alleged perpetrators of the atrocity. Can such policies be covered up with lavish conferences?

Extracts from work of specialist scholars

Map with links to individual locations and their Holocaust history (thanks to an excellent atlas sponsored by Lithuania’s state Jewish museum) [are its authors invited to the 23 June conference?]

Videotaped survivor testimonies about the week of 23 June 1941