Since 2010, when a Lithuanian court proclaimed public swastikas legal and included in its ruling the “historical wisdom” that it only a harmless ancient Baltic symbol, swastikas have proliferated at public events sponsored by the far right, with police looking on listlessly. Most painfully for the dwindling numbers of Holocaust survivors here and abroad, swastikas and other fascist symbols, along with glorification of local Holocaust collaborators, have figured in sanctioned independence day marches in Kaunas on February 16th each year, and in the capital city Vilnius, each March 11th.

Nevertheless, the Lithuanian Foreign Ministry has so succeeded in misrepresenting the situation to naive (usually Jewish academic) sycophants in the West, that even some major Jewish academics from such institutions as Yivo in New York and the Judaic studies program at Indiana University Bloomington, have lent their names and reputations to firm denials of swastika legalization and public use in Lithuania (in the apparent absence of research or reflection upon the hundreds of photographs published by diverse organizations). 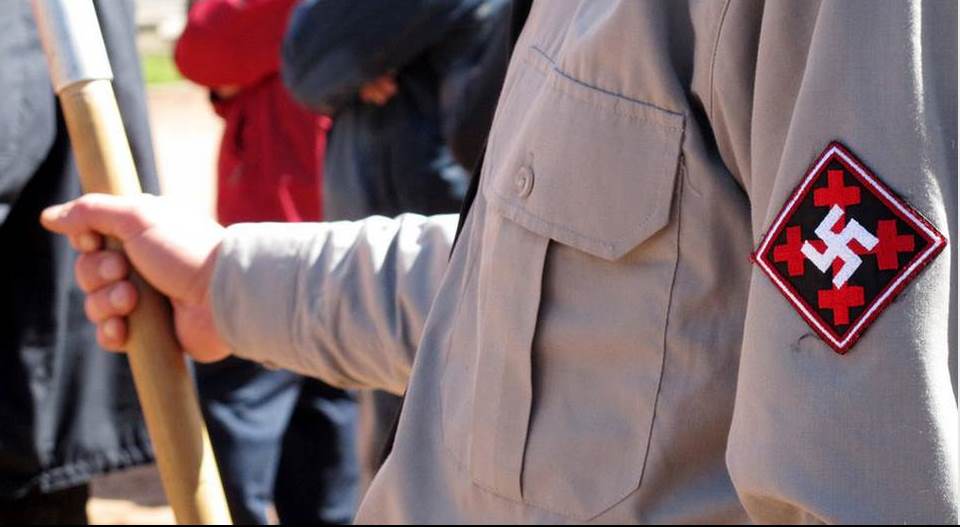 Last Wednesday, in “honor” of May 1st, a swastika-riddled demonstration (flags and embroidery on “uniforms”), was held in the center of Šiauliai (Shavl) with no interference from police or author authorities. It appears that on this occasion the swastikas were mostly or entirely brought for the occasion from Latvia to the north. The following report in Lrytas.lt by Ričardas Vitkus has been translated by Geoff Vasil. Photos are courtesy of Lietuvos rytas.

Nationalist Meeting in Šiauliai: Fiery Speeches and a Swastika Flag 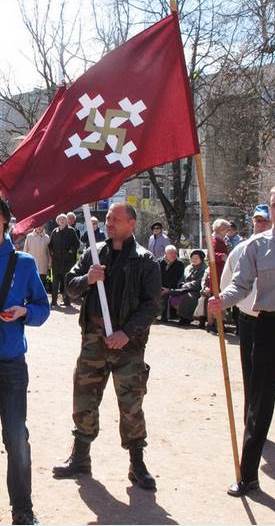 A flag with a swastika flew over a demonstration held Wednesday in Šiauliai [Shavl] by Mindaugas Gervaldas’s [formerly Mindaugas Murza] organization Union of the Lithuanian Nation.

Gervaldas’s supporters carried the flag to the meeting which was also attended by guests from Latvia from the Association of Latvian Anti-Globalists.

Orators at the meeting which lasted for about an hour and a half cursed the government for impoverishing the working people, called for opposing the sale of land to foreigners and the parceling out of mineral and oil rights, and for opposing the legalization of gay marriage.

Although the nationalist demonstration held on May Day was supposedly directed at an audience of working people, several hundred residents of Šiauliai who were mainly pensioners turned out to hear the fiery speeches.

Gervaldas initially listened to his colleagues and took to the podium at about half-way through the demonstration.

Vilmantas Rupšys, director of the Šiauliai chapter of the Union of the Lithuanian Nation, spoke first, and talked about the emigration problem.

“When you think about what will be five years from now, it’s not only sad, but horrifying. Who will remain to work and create here in Lithuania when everyone departs to bend their backs to the foreigners?

“Believe me, no one wants us there. Emigration is not just the loss of young people able to work. It is also broken families, and children left for the grandparents to raise, and a deepening demographic crisis,” Rupšys told the audience.

He said Lithuania could experience an immigration problem as well. Rupšys recently visited Scandinavia and said he had seen the negative consequences of immigration. “I’m not against people of other ethnicities, but a guest cannot demand the rights of the master,” Rupšys said from the podium.

He was followed by fellow party member Romualdas Aksomaitis, who also had some trouble expressing himself politely.

“The government has succeeded in driving a half million people out of Lithuania. Lithuanians deported by the Soviet occupiers attempt to come back, at least in coffins. But will those who were forced to leave Lithuania due to poverty be coming back?” he asked rhetorically.

When he took the podium, Gervaldas greeted everyone on the occasion of International Workers Day, which he said should become the Day of Fighting for Social Justice.

“There is no social justice in Lithuania. And from that many problems follow, including emigration,” Gervaldas said.

Recalling Lithuania’s accession to the European Union ten years ago, Gervaldas said this was equivalent to the loss of independence.

“When we entered the European Union they promised us that several years from then we would have the same quality of life as the Germans and other older members of the union.

“But European Union membership only benefited bureaucrats and their clans able to take possession of European support, while the major part of the nation became cheap labor for foreigners,” Gervaldas said.

Saying no one had the right to sell Lithuanian land watered with the blood of its defenders to foreigners, Gervaldas spoke out in favor of natural gas exploration.

“I’m in favor of us knowing what wealth we possess, but I am categorically against our earth resources going to foreigners,” Gervaldas said.

A group of Latvian anti-globalists stood out against the background of pensioners from Šiauliai at the demonstration.

Some of the Latvian anti-globalists appeared at the meeting only when it was half over. Apparently their automobile, in which they also carried their regalia, was stopped and checked by Lithuanian border police.

“The check took about an hour’s time, but even so, we managed to arrive,” Latvian anti-globalist leader Andris Orolsas said proudly.

At the podium, Orolsas told the audience that Latvian anti-globalists planned to form a political party and oppose the introduction of the euro in their country, and planned later to contest seats in parliament.

When the Latvians who had been late on the way appeared, so did their flags. One of the flags, and the armband of the man carrying it, sported swastikas.