One-Sided Coverage in the “Lithuania Tribune”?

Posted on 20 March 2013 by Defending History

A month has now elapsed since the online Lithuania Tribune took a defamatory press release as God’s-honest-truth news, in absence of the slightest attempt to obtain a quote from the victim, or indeed anyone with a contrasting view. The press release came not from a news agency, but the highly partisan executive director of the “Red-Brown Commission” (the full and rather Orwellian name of which is “The International Commission for the Evaluation of the Crimes of the Nazi and Soviet Occupation Regimes in Lithuania”). The Commission is highly controversial to say the least, and resignations to date (all on principle) from its associated bodies include Dr. Yitzhak Arad, Sir Martin Gilbert (London), Prof. Gershon Greenberg (Washington, DC), Prof. Konrad Kwiet (Sydney) and Prof. Dov Levin (Jerusalem). Moreover, while putting forward an educational image to donors, it is in fact the ultranationalist political engine of a sizable part of the Double Genocide movement in Eastern Europe today, and this dubious role has been brought to light repeatedly. Major statements on the Commission’s activities came in 2012 from its former member Yitzhak Arad, and from the world’s last active association of Holocaust survivors from Lithuania.

What was particularly disturbing in the Lithuania Tribune’s turning the press release into apparent “news” for the uninitiated in these debates, is that it was not victimless; it just served to pour more fuel onto the Commission’s defamation campaign against a Vilnius-born, Vilnius-resident Holocaust survivor who has had, in advanced years, the courage to speak out against state attempts to “equalize” Nazi and Soviet crimes and to point out a specific error that calls out for a simple correction from the Commission member who made the error at an international conference in the Seimas last November. Incredibly, a vicious attack on the survivor, Professor Pinchos Fridberg, trying to blame the entire “Jewish community” to boot, even appeared on the Commission’s own website (for shame), and was met with rapid response on these pages.

Defending History is mentioned too in the Lithuania Tribune “news report” by implication as a journal that is alleged to have allowed only the voices of the survivor’s side of the debate, and not the opposing view. That is patently inaccurate. Within hours of receiving the contrary opinions of Janina Bucevičė of Telšiai and of Liba Blat-Rosenthal and Israela Blat, these were duly published on separate URLs in response to our own, and the survivor’s views; Ms. Bucevičė graciously wrote to thank our staff. Naturally, the debate has moved on in Russian language publications in a number of countries, and Professor Fridberg’s replies, both to Račas and to Račinskas, have by now appeared in authorized English translation in Defending History (see also the section containing his articles in English, where the order is reverse chronological).

The attacks on the Vilnius survivor by then BNS chief Arturas Račas and the Commission’s executive director Ronaldas Račinskas both drip with ultranationalist and antisemitic sentiment characteristic of the unfortunate contemporary mood in some high circles in the Baltics. If a Jewish person dare challenge the Holocaust Obfuscation coming out of the Double Genocide movement in Eastern Europe, it is turned by the unscrupulous into a new casus belli against “the Jews” in general. And this, in the country which tragically had the highest rate of Holocaust annihilation of its Jewish population of any in war-time Europe.

One expects an English language publication intended for foreigners to at least inform its readers that there are two sides of a debate instead of elevating a defamatory press release to the seemingly impartial news of the day among other news items (as opposed to say a piece, such as this one, openly marked Opinion).

Nevertheless, one must credit Lithuania Tribune unreservedly for providing scope for comments under the article. Here is a screen-shot of those comments including the acute and historically important observation by one of Vilnius’s key British personalities, Mr. Mark Splinter. 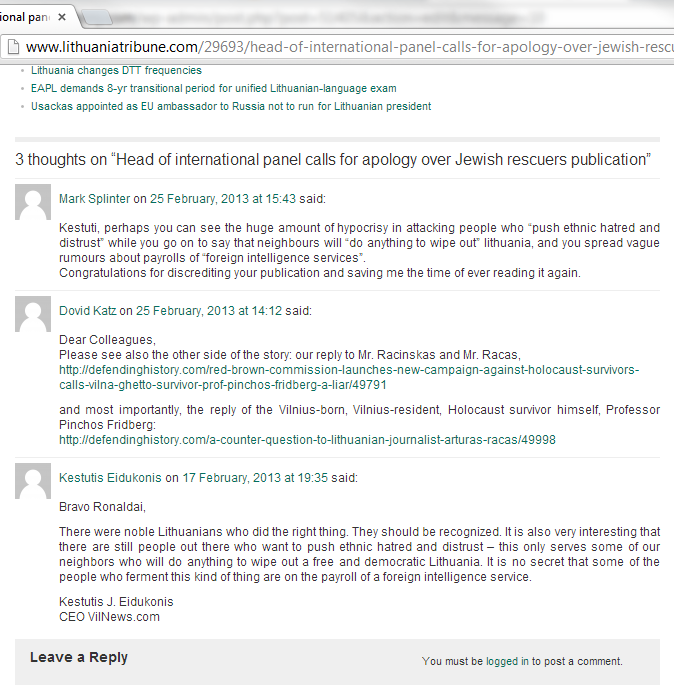 Encouraging as the free-comment section is for the status of Lithuania Tribune, the 17 February comment by the CEO of another Vilnius-based English-language online publication, VilNews.com, is a lamentable example of the “Soviet-in-method and nationalist-in-content” effort to enshrine one opinion as truth by defaming those who hold different views as potentially  ipso facto “on the payroll of a foreign intelligence service” (!). VilNews itself has more than once tried to manipulate Jewish issues for the benefit of elite, government, and property development  interests by discrediting and marginalizing  the peaceful, civil and legal but contrary opinions held by the overwhelming majority of surviving Litvaks in the world today.

Neither Lithuania Tribune nor VilNews have sunk to the one-sided nationalist diatribes of the “news pages” of the paper edition of the Baltic Times in recent years (most frequently against Poland and Polish people on its Lithuania pages).

Surely, a splendid city such as Vilnius (which continues to be Vilna, Wilno, Vilne, etc. even as it continues to capture sundry and far-flung cultural and historical imagination around the world) deserves a publication in English where news items on contentious issues cite appropriate representation of opposing points of view.