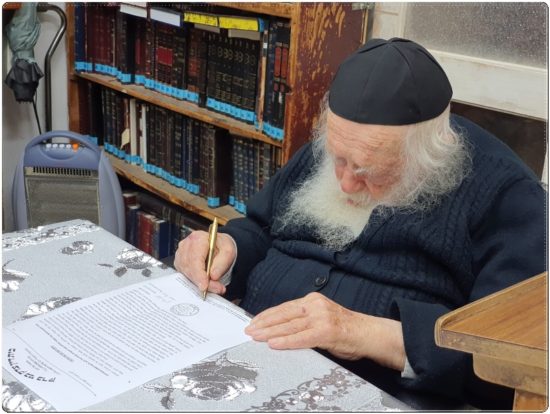 Rabbi Kanievsky, born in Pinsk in 1928, is the son of Rabbi Jacob Israel Kanievsky, the “Steipler Gaon”, and Miriam Karelitz, sister of Rabbi Abraham Yeshaya Karelitz (1878-1953), better known as the “Chazon Ish” (literally “The Vision of Man”), the name under which he published his rabbinic works. He lived in Vilna from 1920 to 1933.

The rabbinical court’s degree, dated the 14th of Shevat (9 February 2020), makes the point that the cemetery belongs to the people buried there, whose families purchased the burial grounds in perpetuity, and it may not be sold or used for any other purpose, least of all for concerts or other public events. The decree makes clear that the site’s holiness is not diminished by earlier acts of destruction or vandalism. The current plan for conversion of the derelict Soviet-era “Sports Palace” to a national convention center is referred to as “adding iniquity to sin” and an act that cannot be remedied by any alleged “supervision” (an oblique reference to the London Aaronite Satmar “grave trading” CPJCE). The decree makes crystal clear that the cemetery is not the property of the public, nor of the Jewish community, but the private property of the individuals buried there and their progeny until the end of time. It is also pointed out that intact graves would inevitably be impacted by the convention center works and supporting infrastructure, and human remains exposed sooner or later (as has occurred in the past whenever works have been undertaken in the cemetery).

Some observers inevitably view the decree as a response to the “Day of Shame” documents signed in Vilnius in Dec. 2019 in effect “selling” the Old Jewish Cemetery to the state-owned Property Bank for massive commercial development. Years ago, Wikileaks exposed the secret payments received by the London CPJCE for their “permissions” for building on Jewish cemeteries in situations where all other rabbis are in opposition. Along with human rights advocates, Lithuanian tradition rabbis internationally have called for equal protections and respect for the cemeteries of minorities, as confirmed in American and European Union law.

The decree, pictured below (and available as PDF), is in concord with those of Lithuanian-origin (Litvak) rabbis internationally, as well as the view of the last chief rabbi of Lithuania, who was fired for opposing the convention center project. 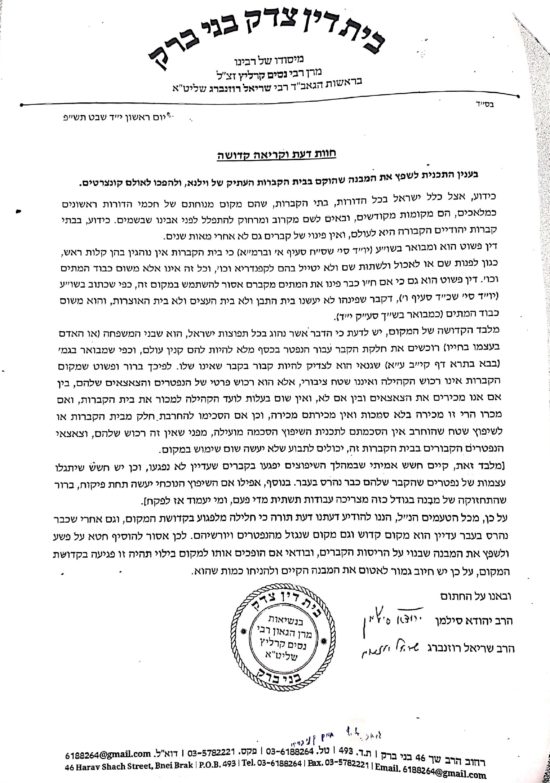