VILNIUS—The controversial London-based “grave selling rabbis” of the CPJCE, alongside its American “Admas Kodesh” branch, has posted on Twitter the recent sensational letter by the doyen of Litvak rabbis, Rabbi Chaim Kanievsky, writing for the vaunted rabbinical court of Bnai Brak, Israel. The edict, in a rabbinic Hebrew that is perhaps not easily read by most Twitter readers, rails against the  a convention center in the cemetery under “rabbinic supervision” (referring to the CPJCE’s project), and forbids the convention center project at the old Vilna Jewish cemetery of Piramónt at Shnípishok (Šnipiškės in today’s Vilnius), and demands the old Soviet ruin be left untouched, stressing that the site cannot, in its view, be used for anything but a cemetery.

The tweet, however, seeks to misinform these groups’ Twitter  readers as “supporting the almost 20 year struggle” (!) of these groups. Orwell indeed. The tweet also referenced the deeply controversial role of the US taxpayer supported USCPAHA. [UPDATE of 29 Sept. 2020: The Conference of European Rabbis has explicitly disqualified the CPJCE from further involvement in Vilnius.] 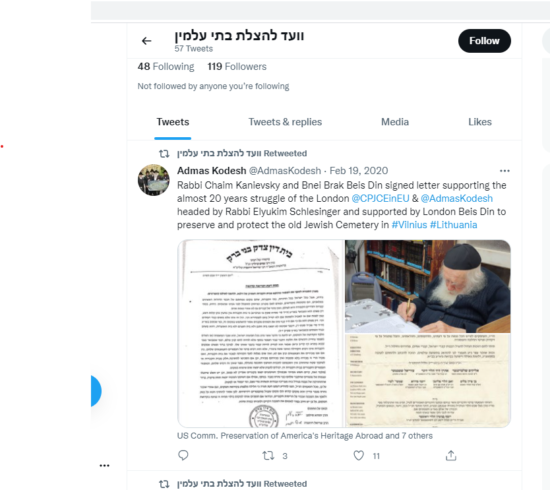 Rabbi Chaim Kanievsky’s ruling turned on its head by misleading tweets from the Londo-based CPJCE and its American branch called “Admas Kodesh”. . .