Posted on 20 February 2020 by Defending History

VILNIUS—In November 2018, Defending History raised some questions about a crowdfunding campaign for a new book by Professor Christoph Dieckmann, a longtime member of the Lithuanian government’s “red-brown commission,” in partnership with bestselling author and Holocaust truth-teller Ruta Vanagaite. The article is reproduced below unchanged for speed of reference.

Today, a list of allocations (as PDF) by the “Good Will Foundation,” representing the Lithuanian’s government restitution for prewar Jewish religious property, cochaired by the chairperson of the official restitution sponsored “Lithuanian Jewish Community” and Andrew Baker of the American Jewish Committee, published its latest list of allocations, which includes ten thousand euros for the same book (top of page 12). The fund’s non-rotating chairpersonship and pattern of allocations have come under some criticism from Vilnius Rabbi Sholom-Ber Krinsky, among others.

Meanwhile, the crowdfunding effort for the same book has today reached $20,525 (as PDF), bringing the total for the Dieckmann-Vanagaite book fund to $20,525 + €10,000 for a book by two famous, successful authors (one academic, one popular) who, it is widely thought, would have no difficulty publishing via a major trade publisher who would rapidly ensure the book’s success for all parties concerned. For several decades, Prof. Dieckmann has been a leading member of the Lithuanian government sponsored “International Commission for the Evaluation of the Crimes of the Nazi and Soviet Occupational Regimes in Lithuania” that is known for short as the “Red-Brown Commission.”

Member of Lithuanian Gov’s “Red-Brown Commission” Teams Up with Ruta Vanagaite, Best-Selling Author, in Crowdfunding Campaign for a New Book

Prof. Christoph Dieckmann, longtime member of the commission and author of a major scholarly work (in German) on the Lithuanian Holocaust, is seen by some, however, to “tow the government line” on the painful issue of widespread outbreak of violence and murder by the LAF and other “nationalists” against their defenseless Jewish neighbors before arrival (or setting up of authority) by the invading German forces in the last week of June 1941. For years now, commission-related “Holocaust spokespeople” have trivialized the numerous testimonies of survivors (sample), and the work of the late eminent historian Prof. Dov Levin, and others, in documenting the massive violence that broke out on 23 June 1941, before German forces arrived, and went on for varying periods of time. Does the new crowdfunding effort signal a shift in the commission’s position?

Conversely, some are asking whether Vanagaite’s positions might have shifted since her earlier best-selling book on the Lithuanian Holocaust. The international debate that followed its publication included Prof. Dieckmann publicly trashing, in a quote in Newsweek magazine, in rather extreme terms, the extraordinary life’s work of the Simon Wiesenthal Center’s Dr. Efraim Zuroff, Vanagaite’s co-author for her earlier book (that has appeared in Lithuanian, Polish, Russian and Hebrew, but not yet English) See the extract from Newsweek below. Ms. Vanagaite was awarded the Wiesenthal Center’s coveted Medal of Valor in 2016. The crowdfunding image promoting the Vanagaite-Dieckmann book is based on various editions of the earlier Vanagaite-Zuroff book. 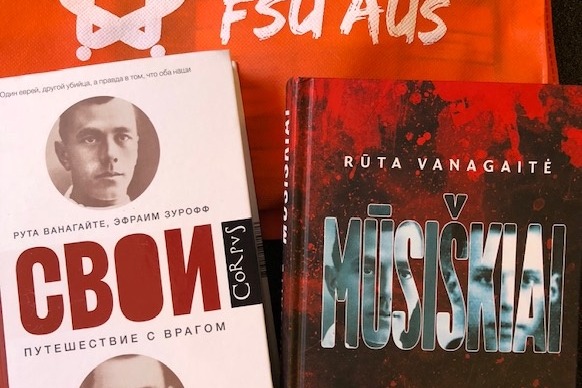 Some are asking why a new book by a major state-funded commission member, teaming up with a best-selling author on the topic of the commission’s remit, needs crowdfunding. [Update of 25 April: By today the crowdfund, long surpassing the professor’s $10,000 honorarium, approaches $19,000 of the $35,000 called for by the duo].

Beyond the hype and PR rollouts of the day lie profound and substantive issues on which Lithuania could make huge progress by ditching the commission’s (and other state agencies’) long-standing de facto compliance with far-right revisionism:

♦   First, on the issue of mass violence by LAF and other local forces before the onset of German rule in late June of 1941. The issue is much exacerbated by city-center museums painfully misrepresenting Holocaust perpetrators as “heroes and freedom fighters” (more on museums).

♦  Second, on the civic acceptability of peacefully objecting in 2018 to state honors for alleged Holocaust collaborators and, of course the commission’s failure to stand up on this ethical core issue per se (even after this year’s New York Times coverage). See Evaldas Balčiūnas’s section in DH (scroll down to 2014 to follow the police and prosecutorial campaign against him). See also list of others who have suffered consequences for daring to disagree with the state on Holocaust history.

♦  Third, and much more broadly, it is time for states in the region (and their “history commissions”) to abandon support for “Double Genocide” revisionism exemplified by the 2008 Prague Declaration (see the European parliamentary response, the Seventy Years Declaration of 2012). See earlier 2018 report in the New York Times.

“Still, many are critical of him and his work. ‘A piece about Zuroff? Well, he plays the media well, doesn’t he?’ Christoph Dieckmann, an award-winning scholar and researcher at Germany’s Fritz Bauer Institute for History and the Impact of the Holocaust, says in an email when asked to comment on Zuroff’s legacy. ‘The problem with Zuroff is that Zuroff is always about Zuroff,’ he adds in a later phone interview, claiming he is ‘a one-man institute, ridiculously bad on research,’ who oversimplifies the issues and ‘turns history into a James Bond movie.’ “