Yet Again, Naive Foreigners in Awe of Annual PR Show by ‘Red-Brown Commission’ (and its Director who Supports ‘War Crime Investigations’ of Holocaust Survivors)

Posted on 3 October 2022 by Defending History

VILNIUS—With nearly all local Holocaust Survivors now gone, or effectively out of public circulation, Lithuania’s “Red-Brown Commission,” a major European engine for the downgrade of the Holocaust via far-right “Double Genocide” history revisionism  is again in the forefront of PR efforts to bowl over naive foreign visitors and delegations to this city, particularly on September 23rd each year, with “moving Holocaust elegies.” For Lithuanian Holocaust survivors, the very choice of Sept. 23 (day of the 1943 liquidation of the Vilna Ghetto by the Germans, two years after the murder of the majority of Lithuanian Jews in hundreds of towns across the land) was seen as a decoy. The day each of them had etched in the heart in perpetuity was June 23rd, when in 1941, violence against Jews broke out in hundreds of locations, with murder documented in around forty — before the first German forces arrived or managed to set up their authority. It was the day when six hundred years of peaceful, harmonious coexistence turned overnight, under Hitlerist propaganda, to dehumanization, humiliation, plunder, rape, injury and murder. To this day, an industrial grade revisionist industry continues to obfuscate or outright deny the history of the First Week (i.e. the last week of June 1941). Indeed, June 23rd is  celebrated by far-right government historians each year as the date of a supposed “uprising” against the Soviets  by the white-armbanded Jew killers who did not “rebel” until the Soviets fled in disarray from Hitler’s invasion, when they began to murder Jewish neighbors across the land unleashing the Lithuanian Holocaust, in which 96.4% of Lithuanian Jewry perished. In 2020, Dr. Arunas Bubnys, the chief historian of the second “Holocaust entity financed by the state,” the Genocide Center, celebrated  the “holiday ” alongside banners of two major Holocaust collaborators. He was rewarded a year later with directorship of the Center.

In fact, from day 1, in 1998, the “Red-Brown Commission” (as it was dubbed years ago by Western ambassadors), which is officially called the “International Commission for the Evaluation of the Crimes of the Nazi and Soviet Occupational Regimes in Lithuania” was bitterly opposed by Lithuanian Holocaust survivors who had the courage to speak out right to their last breaths. Defending History has assembled many of the documents in chronological order for the last decade and a half of the saga. Many of today’s unsuspecting visitors to Vilnius, and enjoyers of “Holocaust remembrance honors and banquets” are blissfully unaware of who, what, where, why.

But for icing on the cake, this week’s gushing report in Jewish News Syndicate ends with a dramatic heartfelt quote from the Commission’s executive director, Ronaldas Račinskas, who was equally proud to tell a German documentarian, on the record, on video, why it was necessary, in his view to put Fania Brantsovsky and the “others” (i.e. Rachel Margolis, Yitzhak Arad, Sara Ginaite, and more) through pre-trial investigations for “war crimes.” This is part of the chapter that the Economist back in 2008  called Blaming the Victims.

Far from being a question of this one pronouncement, it is part of a long record of documentation of the commission’s public relations work, and of the personal pronouncements of its executive director over the years. 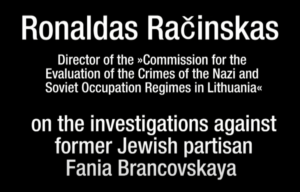 And, when the last Vilna-born Holocaust survivor in town dared correct a historic mistake in a paper, Mr. Račinskas called him “a liar” on the commission’s official website. He was causing the Lithuanian government so much embarrassment that the entire commission website, with the history of decades, was removed from the internet as a consequence, and started anew with better PR controls.

See now Efraim Zuroff’s op-ed in Jewish News Syndicate in response to the cited naive PR article extolling the Holocaust memorial by parties who have worked for decades to obfuscate, distort, minimize and relativize the Holocaust.

He has held the post from its founding in 1998 to the present, as has the Commission’s chairman, Lithuania’s famed “court Jew” whose career with the right-wing Conservative Party seems to be based on his ability to help “fix” the Holocaust while enchanting foreign Jewish audiences with Hollywood-grade talent. But signatures on permanent documents speak louder in the halls of history than grotesque performances for tourists. Indeed, he was the only Jew in Europe to sign the Prague Declaration of 2008, the foundational document of the far-right nationalist-driven Double Genocide movement. Its history was chronicled in Danny Ben-Moshe’s documentary, Rewriting History (now available free online).

There is a very simple way to fix things: a public letter of apology and unconditional retraction of all insinuations and accusations against the maligned-for-history Holocaust survivors who joined the anti-Nazi resistance and are heroes of the free world. Starting with Dr. Yitzhak Arad, Fania Yocheles Brantsvosky, Prof. Sarah Rubinstein Ginaite and Dr. Rachel Margolis…

One of the Holocaust survivors defamed by Vilnius prosecutors and other state entities intent on “fixing the Holocaust” via Double Genocide revisionism was the late Dr. Yitzhak Arad, who was for two decades director of Yad Vashem in Jerusalem. In one his last scholarly papers, which he decided to publish in Defending History a decade ago, Arad provides a history of the formation, goals, and activities of the commission and its leaders, particularly with respect to the “Prague Declaration” of 2008 in which it played a prominent role.