Posted on 6 May 2013 by Defending History

Lithuanian conservative politician, former Head of the Lithuanian Parliament and current EPP Member of the European Parliament Vytautas Landsbergis has consistently expressed homophobic views and spoken out against initiatives to strengthen LGBT (lesbian, gay, bisexual and transgender) rights in the European community, and particularly in Lithuania itself.

ON THE GLORIFICATION OF LOCAL NAZI COLLABORATORS

Landsbergis expressed his views about LGBT rights unambiguously in his outlandish claim in 2010 that paedophilia is connected to homosexuality. This claim was made at a parliamentary hearing on the sexual abuse on children organised in the European Parliament. According to Landsbergis, children should be protected from “homosexual propaganda” and “homophilic [sic] paedophilia”. Landsbergis’ claims were condemned by Cecilia Malmström, the European Commissioner for Home Affairs; and the European Parliament’s Intergroup for LGBT Rights, which stated that it condemns paedophilia unreservedly, as do all recognized LGBT organizations worldwide.

The Lithuanian Law on the Protection of Minors against the Detrimental Effects of Public Information went into force in March 2010. The law classifies any information which “denigrates family values” or “encourages a concept of marriage and family other than stipulated in the Constitution… and the Civil Code of the Republic of Lithuania” as detrimental to children and consequently bans such information from public places accessible to children. Though this wording leaves room for interpretation as to what exactly constitutes such information, the law could be used to restrict the freedom of expression of LGBT people and dissemination of information related to LGBT issues. The wording of the draft version of this law included a ban on the “promotion of homosexuality and bisexuality to minors.” This wording was changed after criticism from the international community and when it was officially condemned by the European Parliament.

In the debate regarding this law proposal, Landsbergis defended the original wording, stating that:

“The key words in the troublesome line about the promotion of homosexuality to minors are ‘promotion’ and ‘minors’ – not ‘homosexuality’, as some would have it. […]  ‘Promotion’ is a deliberate action going beyond the simple and necessary information currently provided by sexual education, which should include a clause of tolerance to homosexual appeal and love. The promotion of homosexuality to minors, if we open our eyes, may quite often mean significantly more – from encouraging them to try it, to the seduction of minors, even for homosexual prostitution. …

Various members of the European Parliament have repeatedly expressed concern over homophobic initiatives made in the Lithuanian Parliament, specifically the above-mentioned law on the protection of minors and restrictions to the freedom of assembly and expression of LGBT people.

In 2011, a concrete articulation of this concern was given in a motion for a resolution on the violation of freedom of expression and discrimination on the basis of sexual orientation in Lithuania. In debate concerning this motion, Landsbergis criticized its content as reflecting

“intervention of the European Parliament in the proceedings of national parliaments at the earliest stage of work on any proposed legislation is contrary to the fundamental principle of sovereignty and subsidiarity of Member States”.

The European Parliament adopted a resolution in May 2012 to condemn homophobic laws and discrimination in Europe. The resolution was adopted with 430 votes for and 105 against, and was co-authored by all five mainstream political groups: the center-right EPP, S&D, ALDE, Greens/EFA and GUE/NGL. The resolution came in response to recent laws or proposals in EU countries such as Lithuania, Latvia and Hungary and Council of Europe Member States Russia, Ukraine and Moldova, which make it a penal or criminal offence to talk positively about homosexuality in public. 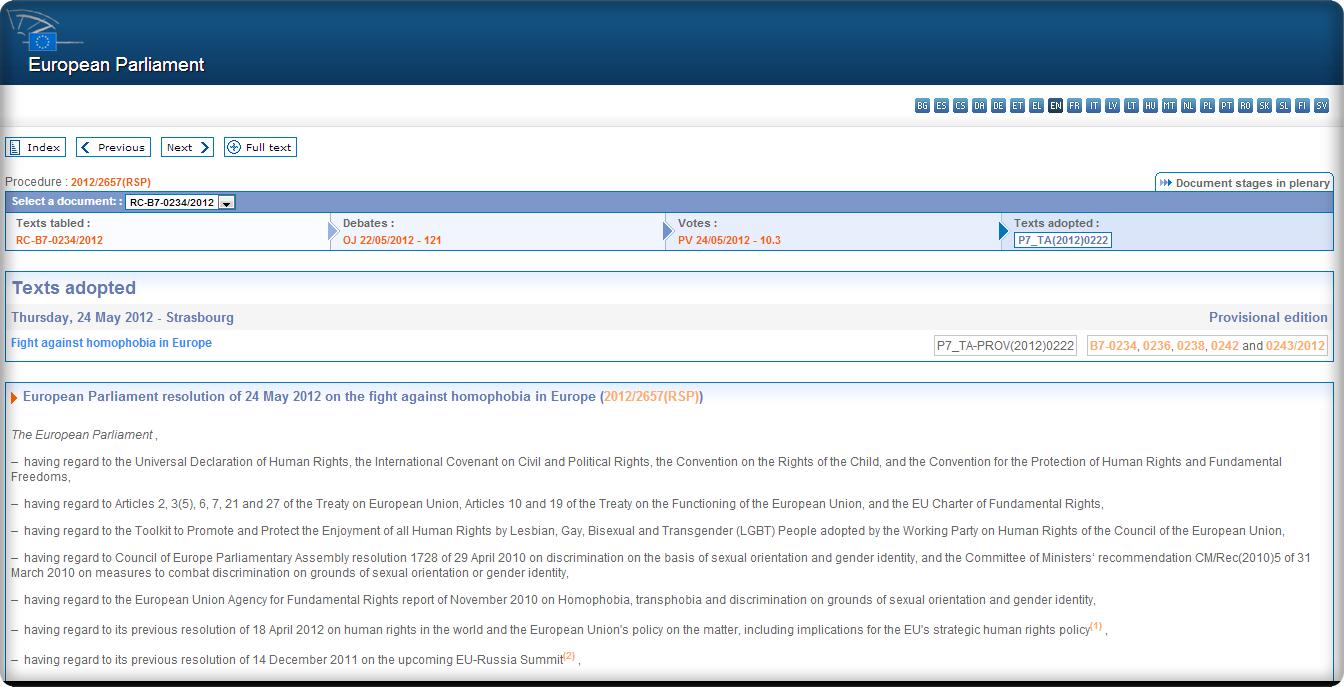 “strongly condemns any discrimination on the basis of sexual orientation and gender identity.”

In regard to Lithuania, the resolution expresses concern about violation of freedom of expression and discrimination on the basis of sexual orientation, and the Law on the Protection of Minors against the Detrimental Effects of Public Information. The resolution calls on all EU member states to demonstrate, and ensure respect for, the principle of non-discrimination and to reconsider discriminatory laws and proposals in light of international human rights law.

Two Lithuanian MEPs, Leonidas Donskis and Laima Andrikienė, voted in favor of this resolution. Landsbergis voted against, and made the rather astonishing  statement in the Lithuanian news portal delfi.lt that

“times will come when we will be dealing with heterophobia and intolerance of, even discrimination against, heterosexuals.”

This is why in his opinion heterosexuality, which may soon be a new minority, needs to be protected.

The above cases illustrate how the rhetoric used by Landsbergis aims to confuse homosexuality with child abuse, obfuscating the entire issue, while trying to stir up fears of the LGBT rights movement’s supposed (and preposterous) actual aim of marginalizing heterosexual people. He defends the sovereignty of Lithuania against the European community’s “interference” into national affairs, ignoring in his rhetoric, however, the many Lithuanian LGBT people fighting to exercise their national constitutional rights and freedoms.

July 2013 will mark the twentieth anniversary of the decriminalization of homosexuality in Lithuania, and preparations are underway for the second Gay Pride march to be held in the country during this month, hopefully on the capital’s main boulevard where it belongs. Hopefully this busy year will raise awareness about the ongoing human rights violations of Lithuanian LGBT people, and the homophobic track records of certain politicians hindering progress made by Lithuanian human rights activists.

8 May 2010.  DefendingHistory.com: ‘Eyewitness Account of the Baltic Pride Parade in Vilnius’.

27 June 2011.  DefendingHistory.com: ‘Cartoon of The Jew and The Gay holding up (controlling) the world is back in town’.

21 January 2009.  DefendingHistory.com: ‘Who controls the world? Cartoon again on page 1 of Respublika‘.