Posted on 8 May 2010 by Defending History


BNS summary here. Video here. The state prosecution service that continues to  ‘investigate for war crimes’ Holocaust survivors who joined the anti-Nazi resistance, and passes over neo-Nazi marches in utter silence, tried hard (but failed) to stop the May 8th Baltic Pride Tolerance march in Vilnius.

After being refused entry into the actual Baltic Pride marchers’ area, on grounds that we did not have individual permits, we were directed to the plaza between the Reval Lietuva Hotel and the CUP department store where we were told the march’s concluding point could be observed. There, police eagerly directed visitors and sympathisers into an ‘observation area’ just below on a grassy hillside. It soon became evident that while limiting the formal numbers of Baltic Pride participants, the police were shepherding visitors into an area occupied by neo-fascists and bolstering their apparent numbers.

Two brave local young women displayed a rainbow peace flag. Several neo-fascists proceeded to spit on them, yank away the flag and set it on fire. Onlooking police did not intervene. A third woman stamped out the fire. When only a small fragment of the Peace flag remained, Wyman Brent, director of the Vilnius Jewish Library, retrieved it and said: ‘It will be on display when the library opens in July’.  Images of flag by Lukas G. Duenser. 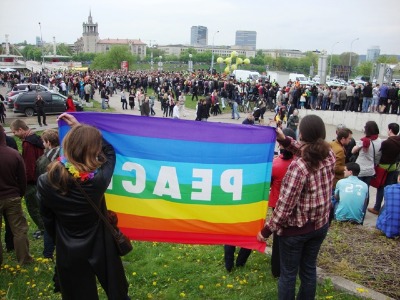 At various points during the morning and afternoon, smoke bombs were thrown by the neo-fascist group assembled, with little reaction from the police.

Visitors felt increasingly uncomfortable at having been directed by police into an area filled with neo-Nazis who sporadically shouted anti-Jewish, xenophobic and homophobic epithets. Austrian Holocaust Museum volunteer Lukas G. Duenser, a member of the Green House team this year, proceeded to advise supporters of Tolerance to pick and wear a dandelion from the hillside as distinguishing mark. As the people on the hillside picked up the newfound symbol, it quickly became evident that a hefty chunk of the crowd in the cordoned-off area were opponents of the neo-Nazis, among them more than a few local residents among the many from different parts of the world who had come to watch.

The main focus of attention, however, were the neo-Nazi flags and armbands flaunted throughout the day by a group of neo-Nazis on the plaza above, flanked by the flags of Lithuania, the European Union, some EU member states, and the Reval Lietuva Hotel sign. They chanted allegiance to Hitler and gave interviews explaining the need to rid the country of ‘all degenerates’. When asked why they do nothing, police officers massed beside the neo-Nazis explained with a smile: ‘It’s not exactly a swastika’, referring to the apparent pact with authorities whereby neo-Nazi demonstrations are ‘fine’ as long as the symbols are not precise swastikas (so much for the 2008 ban on ‘Nazi and Soviet symbols’). At a makeshift news stand, one of the neo-Nazis was handing out a newspaper with details of the various swastika-like symbols, referred to by this site as swasticals.

In front of the amassed police, the neo-Nazis cheerfully distributed materials including the diagram below which assured the faithful that the swastikas on their flags and armbands were the real thing. So much for the 2008 ‘ban on Nazi and Soviet symbols’ which did nothing but intimidate aged anti-Nazi war veterans domestically, while substantial state funds continue to be directed abroad to persuade the European Parliament to adopt the red-brown resolutions that obfuscate the Holocaust.