The infamous cartoon of The Jew and The Gay holding up the world was featured in Respublika and other mass circulation newspapers in Lithuania in 2004, and again from 2009. See our reports here, here and here. It came back to the newspaper today. 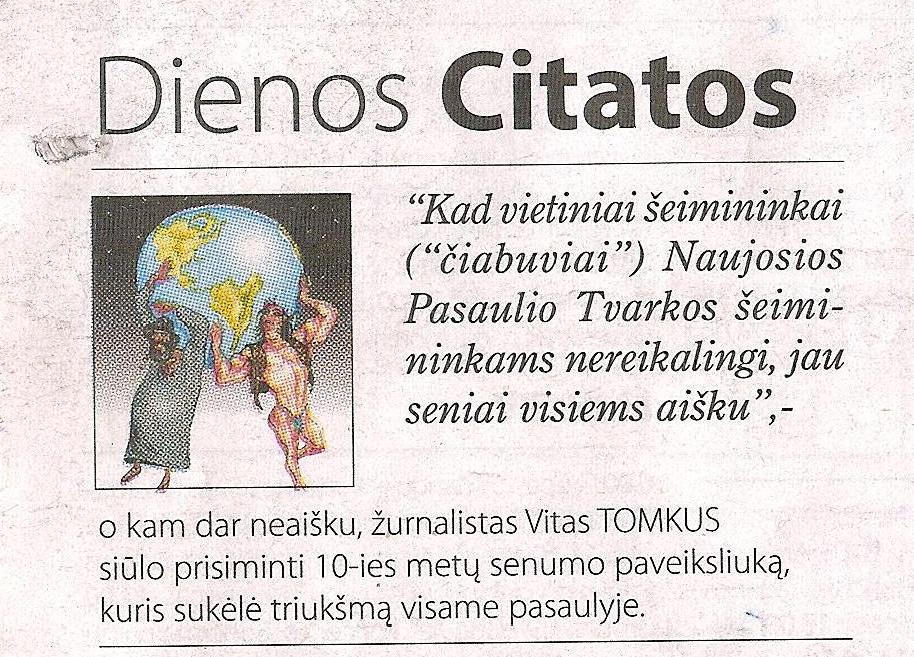 These outrages, which cause enormous pain and anguish to the dwindling Survivor community in the region, went wholly unmentioned at the recent OSCE conference on antisemitism in Lithuania.  They also went unmentioned at an international event on Freedom of the Press. In both cases, the Lithuanian Foreign Ministry dispatched the master spinmeister director of the (tragically government-hijacked) Vilnius Yiddish Institute, now reduced to a government PR machine, to spin away the government’s Double Genocide campaign, glorification of 1941 perpetrators and abject silence on real antisemitism.

And now, the cartoon is back.  It appeared today in miniature on the back page of Respublika in the ‘Quotes of the Day’ column. The quote is from the long and vicious article of the editor, Vitas Tomkus. Will there be statements from those paid to monitor antisemitism, freedom (and responsibility) of the press, or from the small army of government officials on call to tell the world about grand projects to ‘revive Jewish culture’.

Translation of the text accompanying the image in today’s Respublika:

“That the local rulers (‘the locals’) are not needed by rulers of the New World Order has been clear to everyone for a long time”  — and for whomever it is not yet clear, journalist Vitas TOMKUS suggests remembering this picture of 10 years ago which created a stir throughout the world.