Wollongong, Australia is a Long Way from Kaunas, Lithuania: Discovering a Holocaust Collaborator Among Us

Posted on 15 November 2022 by Defending History 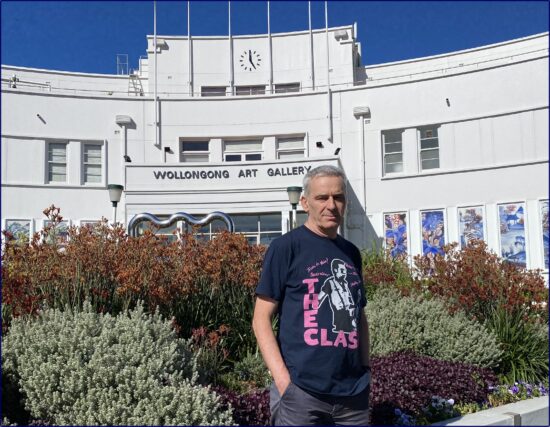 Michael Samaras at the Wollongong Art Gallery in Australia

Wollongong, an Australian city located about 80 kilometres south of Sydney, is a long way from Lithuania’s Kaunas, which probably made it attractive to Bronius Sredersas. He arrived in 1950, having fled Lithuania ahead of the Red Army in 1944. For the next 25 years Sredersas, one of more than 100,000 displaced persons to settle in Australia, worked in Wollongong’s steelworks. He led an unobtrusive life and acquired an anglicised nickname, “Bob”. He never married and didn’t waste his money. Instead, he saved his pay, frequented auction houses and with a canny eye built a substantial art collection.

In 1976, Sredersas shocked the citizens of his adopted city by presenting his art collection to them. For an industrial city like Wollongong, which didn’t even have an art gallery, this gift was a sensation. It triggered the establishment of the Wollongong Art Gallery which has since grown into a major regional cultural institution.

Sredersas was widely celebrated in the media and an exhibition space within the new gallery was named in his honor. After his death in 1982, his memory was preserved with eminent persons giving lectures in his memory. The gallery erected a plaque and hosted the Sredersas Dinner as a fundraising social event.

In 2018, the gallery staged a major exhibition celebrating Sredersas. Titled “The Gift”, the exhibition included a recreation of his home, a display of the artworks, a video, and a symposium on his life and benefaction.

Publicity for the exhibition included mention that in Lithuania, Sredersas had been a policeman. While I was aware of Sredersas’ life as a steelworker in Australia, his prior career as a policeman was new to me. I knew though that the Nazis had relied on local collaborators, formed into police battalions, to carry out the Holocaust in Lithuania. I was appalled at the possibility that Wollongong, my home town, might be honoring a Holocaust perpetrator and decided to see if I could find out more.