that Defending History  has published personal attacks against MEP Professor Leondias Donskis, whom this journal has consistently heralded as Europe’s major intellectual warrior against Double Genocide and as a fearless champion of truth. In addition to MEP Donskis featuring multiple times on Defending History‘s front page as one of the journal’s central moral heroes of our times, an entire section is dedicated to his work; it contains a number of translations of Donskis’s Lithuanian essays into English, commissioned by Defending History, and always published with the author’s written permission and approval of the final text. The dozens of references to Donskis’s heroic stands, in Lithuania and beyond, can easily by found by keying his name into the Search box at the top right of each page. That anyone would misconstrue our open critiques of numerous aspects of next week’s London conference is regrettable. That anyone would try to convince anyone else that the critique somehow targets Professor Donskis is ludicrous — the page on the conference itself provides links to Professor Donskis’s works which are held up as sterling exemplars of the precise opposite to the policies pursued by the government that is sponsoring this conference.

As for the second eminent scholar mentioned in the circulated email, Professor Saulius Sužiedėlis, it is likewise incorrect that he has been the object of personal attack on these pages. Some of our authors have fulsomely praised his stances (e.g. here and here), and some have disagreed with and criticized them (e.g. here). Defending History respects the right of reply (see e.g. here and here). Moreover, it is no secret that this journal believes that all the academic members of the Zingeris-Račinskas Commission (the “Red-Brown Commission”), which includes some major scholars, bear some moral responsibility for the massive political labors of that selfsame commission on behalf of the Double Genocide campaign and its central document, the Prague Declaration, for which the commission campaigns relentlessly, from its own Vilnius-based website, right to the European Parliament. See also our section on the commission, whose official name is — how much more Orwellian does it get — “The International Commission for the Evaluation of the Crimes of the Nazi and Soviet Occupational Regimes in Lithuania”… 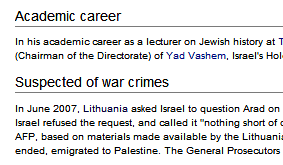 From the Wikipedia entry for Yitzhak Arad: In the absence of a public apology from the Lithuanian government, that government’s sponsored “red-brown commission” and its members bear moral responsibility for the ongoing defamation.

Then there is “the slight matter called Arad.” To this day, this commission has failed to publicly condemn the kangaroo war-crimes charges against its own founding member Yitzhak Arad, the eminent Holocaust survivor, resistance veteran, veteran of the Israeli war of independence, eminent Holocaust historian, and long-time director of Yad Vashem. The commission’s public silence rankles more by the day, even as the cowardly and baseless defamation of Dr. Arad continues to spread (see his Wikipedia entry), in the  absence of an apology from the responsible government, which continues to fund this commission. Scholars who have resigned on principle from the commission and its associated committees include, in addition to Dr. Arad himself, Sir Martin Gilbert (London), Prof. Gershon Greenberg (Washington, DC), Prof. Konrad Kwiet (Sydney) and Prof. Dov Levin (Jerusalem). Defending History is by far not alone in expressing disappointment with this body. Holocaust survivors have spoken up with clarity, from the commission’s launch in 1998 to its  relaunch in 2012 (more here).

Dr. Arad, incidentally, has just  completed a major study on the obfuscation of the Holocaust in Lithuania that contains important insight into the specific role of the red-brown commission in that obfuscation, noting particularly the stances taken before vs. after European Union and NATO accession. Defending History is proud that Dr. Arad has chosen to publish his important contribution on these pages.

The second misrepresentation in the circulated email is the claim that Professor Donskis is somehow responsible for all of next week’s conference: The prankster, thought to live in a central European country on the basis of the electronic trail, tells people: “For your information, MEP Prof. Donskis is going to moderate the whole event. This petition is a scam and shame on those who drafted it!”

MEP Donskis has today confirmed to Defending History that this is a gross miscasting of his role: he is appearing once as a moderator of a session to honor the appearance of a new book, and once as a participant in a session. While we certainly agree with the proposition that Donskis’s very participation in any part of the conference is apt to be misinterpreted, and that it has already been misrepresented by Lithuanian government operatives in London, Brussels and elsewhere, it is a suitable question, like any other, for open, respectful and transparent debate.

The indefensible phrase “this petition is a scam” frankly constitutes a third misrepresentation. The worst of all.

While anyone has every right to disagree with Monica Lowenberg’s petition, it is not remotely the case that her petition attacks (or even mentions) anybody, let alone the two professors mentioned. The conference’s participants and organizers are not addressed in Ms. Lowenberg’s petition, which is focused with razor sharpness on the irksome and painful issues in Lithuanian-Jewish affairs that need to be addressed urgently, for which simple practical solutions can be found; in fact the solutions provided are broadly in concord with our own proposed solutions.  The petition, which is online for all to read (and to sign!), is a document Defending History is proud to be associated with.

A sincere second generation Holocaust survivor is effectively called a “scam” artist in a context that casts aspersions on the integrity not only of the petition’s author but also of the hundreds of people from over a dozen countries who have signed to date. As if there is some hidden agenda not present in the words of the petition. As if it is insignificant coming “only” from a woman. As if it is not conceivable that she believes in what she is writing and she “must be” part of a “scam” for launching this petition. Had the bigoted prankster taken the time to research Ms. Lowenberg’s record, he would find that in the UK she is a nationally acclaimed campaigner against Baltic antisemitism, racism and Nazi-worship. Her proud and impeccable record in the battle against resurgent antisemitism and the glorification of the Waffen SS in Latvia speaks for itself. Readers are referred to her important debate earlier this year with the Latvian ambassador to the UK and to Martin Bright’s recent report on her contributions on these topics in the realm of contemporary British politics, which have gained notice also in the Spectator. There are numerous media references to Ms. Lowenberg’s leading role in the counter-demonstration to the state-approved Waffen SS march in Riga, the Latvian capital, last March.

Does anyone really think that Monica Lowenberg’s request that the Lithuanian government apologize to the Holocaust survivors accused of “war crimes” is a “scam”? Who is being scammed of what?

This journal actively supports Ms. Lowenberg’s request to be given five minutes at the London conference to read out her petition, in the company of her nonagenarian father who is a Holocaust survivor. The attempts by some to rubbish her work, in effect via a dirty tricks campaign, are frankly contemptible.

The full text of the untoward email being circulated is:

“If anyone believes that people like  MEP Professor Donskis who is probably the most outspoken political and academical person against [the] theory of double genocide, Professor Saulius Suziedelis — an outstanding and objective historian analyzing [the] Holocaust in Lithuania and others are considered by [the] authors of this petition as supporters of double genocide, ‘obfuscation’ of [the] Holocaust and distortion of history, then, I am sorry those people are simply out of their mind and they are busy with distortion of reality. For your information MEP Prof. Donskis is going to moderate the whole event. This petition is a scam and shame on those who drafted it!”

Defending History has received information (that cannot be confirmed) that the prank’s author may be closely related to a major right-wing Lithuanian politician who is one of the stalwarts of the Double Genocide campaign, and hopes to cause discord and rancor among those who have been opposing that campaign. But the genuine Litvak community, small and weak but proud and undaunted, remains dedicated to free and dignified debate over ideas and events, conducted in public, and without misinformation campaigns, which will continue, in the digital age of “No Secrets” to be exposed without delay.

Far from being a lark of the past, the Double Genocide movement continues to move forward at an alarming pace. This week, Defending History was proud to publish the book review by Geoff Vasil (Vasiliaskas) of MEP Vytautas Landsbergis’s regrettable new book which tries yet again to whitewash the 1941 Nazi puppet government in Kaunas that oversaw the onset of the Holocaust in the region (and beyond).

Perhaps Purim is the Jewish holiday that very remotely, via dressing-up games and robust humor, has some minuscule trace of April Fool’s Day.

But not for Chanukah.