Posted on 30 March 2015 by Defending History

When I wrote several years ago (Lithuanian; English) about the monument erected to Juozas Barzda at Iešnalis Lake, I thought it must have been some sort of misunderstanding.

Some time passed after that article. The author of the “misunderstanding,” Albinas Klimas, became the mayor of the Plungė regional administration, and I no longer believed this was a misunderstanding. But I thought that a man who takes on important responsibilities might also expand his horizons, update his views and that monument might somehow go away from the land under his jurisdiction. Elections were recently held,  and Klimas was for now removed by the voters from the political life of Plungė along with his Law and Order Party.

“Juozas Barzda was a lieutenant and was the commander of a unit in the 2nd tracer-bullet brigade of the 2nd Infantry Platoon at the onset of the Soviet occupation; on July 24, 1940, he was reassigned to the 9th infantry platoon; on September 24, 1940, he was appointed unit commander of the intelligence battalion of the 179th sharpshooters division; at the end of 1940 he was placed in the reserves; he lived in Kaunas, worked as assistant director of the facilities department of the university; when the German-Soviet war began he organized a group of  students in the dormitory into insurgents; on June 28, 1941, he was accepted into the Kaunas komandantur of the TDA; on July 3, 1941, he was appointed commander of the 3rd brigade of the TDA battalion.”

“From 1941 on he was mixed up through the actions of the Germans in the mass murder of Jews; later the 3rd Brigade he commanded was used specially for mass murders at the Kaunas forts and outside Kaunas; on August 25, 1941, he was reassigned to the 2nd PPT battalion (later the 2nd Security Battalion, the 12th Battalion) and appointed commander of the 3rd brigade; in October of 1941 he together with the battalion traveled to Minsk where the 2nd PPT Battalion (later the 2nd Security Battalion, also becoming the 12th Battalion) was again used for the mass murder of Jews, Soviet POWs and others; again placed in reserves; commander of the 3rd brigade of the nascent 302nd battalion of the Ukmergė komandantur of the Vietinė rinktinė [Local Select pro-Nazi paramilitary force]; member of the Free Lithuanian Army; from August 19, 1944, on, commander of the Vanagai [anti-Soviet partisan group] of Telšiai; died in December of 1944 when he drowned in Plateliai Lake during a parachute jump, corpse recovered and identified on January 15, 1945 as that of Barzda, born in Kavoliai village in the Zarasai district.”

On the eve of this year’s 2015 Lithuanian Independence Day I drove to Iešnalis Lake. The road to Plateliai has good parking lots set up along it. One of these is next to the village tourism farm of Elena and Albinas Klimas called “Iešnalė.” I parked the car and decided to go ask where the memorial was. I got out and saw in the parking lot a massive commemorative sign, whose text was:

“A group of Lithuanian Freedom Army officer parachutists from the Vanagai camp at Plateliai Lake were dropped on Iešnalis Lake on December 14, 1944. Their task was to start a partisan war for Lithuanian independence. 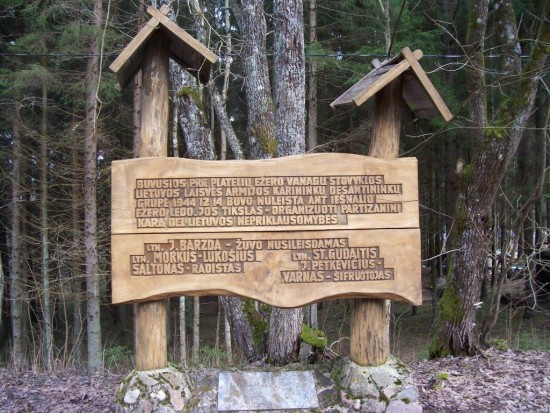 I was asking myself: Did this memorial really receive all the required permits? An obvious distortion of historical truth was apparent. This was a group of parachutists armed and trained by Nazi military intelligence. Even at the end of the war the Nazis refused to recognize Lithuanian independence, and the assignment of this group was clearly to engage in diversionary tactics. Even though I wanted to get angry, all the same my goal was to discover the location of this memorial commemorating the murderer of thousands of people.

I went to the village-tourism farmstead next to the parking lot. I knew this was the farmstead whose owner erected the memorialand I believed he would know where it was located. I encountered a man in the yard, a worker. He didn’t know, and suggested I talk to the owners. I knocked and a pleasantly spoken woman opened the door. I told her what I was looking for and asked directions. She said she would get the landlord and he would take me. I tried to talk her out of it, saying I didn’t want to disturb him. She said it would make him glad to show me, dispelling my doubts. A stocky and greying man came and introduced himself as Albinas. He wasn’t all that concerned with who I was. Speaking in the Žemaitijan dialect, he asked: “What agency are you from?” I said I was interested in history and did a bit of writing.

That was sufficient. I went on to the memorial area, comprising the wooden monument and the symbolic gravestone, as some important person, escorted by the mayor of Plungė! We spoke a little and he told me of this and that. He did not tell me about his post, and to me he appeared as a humble man of the countryside, and he was dressed in clothes befitting everyday rural work. We shared a few words about the Lithuanian Freedom Army and then we came to the wooden monument. I took some photographs while he explained the history.

I suggested to the recent mayor that he stand next to it for a photograph, but he declined, saying “I’m not photogenic today.” He said Barzda was buried here next to the lake, a few dozen meters from the lake shore, under a fir tree. And he continued to tell the story. He said that Barzda had shot Jews, although he didn’t know exactly how many and where, but did mention the Seventh Fort [in Kaunas] and Belarus… And I listened and was amazed: the guy knew to what sort of murderous trash he had built a monument, and nonetheless was proud of it… My emotions clouded over and I no longer wanted to listen to any of it. That a person such as Barzda was being commemorated at all in my country was horrid.

Later, after I had returned home, I found the entire history of the erecting of the informational sign and of the headstone in a book published on the initiative of Albinas Klimas, called (in translation): Lithuanian Freedom Army Parachutists in Žemaitija  and available on the internet, in Lithuanian.

Before the monument was set up, a special panel was convened. After selecting a spot for the grave-marker, the mayor, Albinas Klimas spoke:

“The most important thing here is doing what is honorable. It’s not important whether it’s erected in an inconvenient location, in the shade of the old fir tree, or at the intersection of three forest roads, in a safe place so that in winter when large logs are being carried over the forest roads they won’t hit the monument. For a long time I have thought that this site is the best. There were barriers to erecting the monument. Earlier, it wasn’t allowed to build anything in the territory of the Žemaitijan National Park Reservation. What is needed is for the site of the death of Senior Lieutenant Juozas Barzda to be marked with a humble monument.”

From the start of the forest to the monument the bushes and weeds were removed (and were placed along the path to rot, according to requirements), and a wide, comfortable approach to the monument was made. Partisan warfare researcher Emilija Mikulskienė and resistance chronicler Alfonsas Beresnevičius brought lily of the valley [Convallaria sp.] and native ferns from the Kalniškiai Forest in the Stalgėnai aldermanship and planted them next to the newly erected monument [to conform to bans on planting exotic, non-native plants in the national forest].

In the spring of 2004 Albinas Klimas organized the transport of the stone used in making the monument to the Lithuanian Freedom Army from Plateliai to the farm of the sculptor Antanas Vaškys in Plokščiai village, and in August [of that year] organized the transport of the completed monument from the farm to the site allocated for it in the center of the town of Plateliai.

The height of the monument stone is 2.25 meters, its width (in the lower portion) is 2.45 meters, and its diameter is 1.1 meters. The inscription reads:

The height of the large letters is 14 centimeters. At the base there is another inscription:

In August of 2004 Albinas Klimas was responsible for doing the informational display and setting it up at Babrungėnai village on Iešnalis Lake along the Plungė-Plateliai highway, where on December 14, 1944, the group of five officers descended by parachute. The inscription:

“A group of Lithuanian Freedom Army officer parachutists from the Vanagai [partisan formation] camp on Plateliai Lake were dropped on the ice of Iešnalis Lake on December 14, 1944. Their task: to start a partisan war for Lithuanian freedom. Lieutenant J. Barzda died in the drop. Lieutenant K. Morkus-Lukošius. Lieutenant St. Gudaitis. Saltonas was the radio specialist. J. Petkevičius-Varnas was the code specialist.”

The inscription was inscribed on a slab of oak 2 meters wide and 0.935 meters high.

The illusion is maintained despite the fact that Juozas Barzda is one of the worst mass murderers of the 20th century who oversaw and commanded the mass murder of tens of thousands of people in Lithuania and Belarus, but this “little blemish” upon his biography doesn’t seem to have prevented some people from trying to turn him into a hero. Agencies and departments of the Lithuanian state issued all the necessary permits for this to be done.

The illusion that this monument was some sort of mistake or misunderstanding has long since elapsed. Commemorating the murderers is truly the most consistent policy of the Republic of Lithuania carried on for several decades now.

Both the commemorative carved wooden sign located next to the parking lot at Klimas’s village tourism complex and the headstone in the forest—not the actual location of the mortal remains of Barzda, by the way—are located on public land and were erected by resolution of the local regional administration. 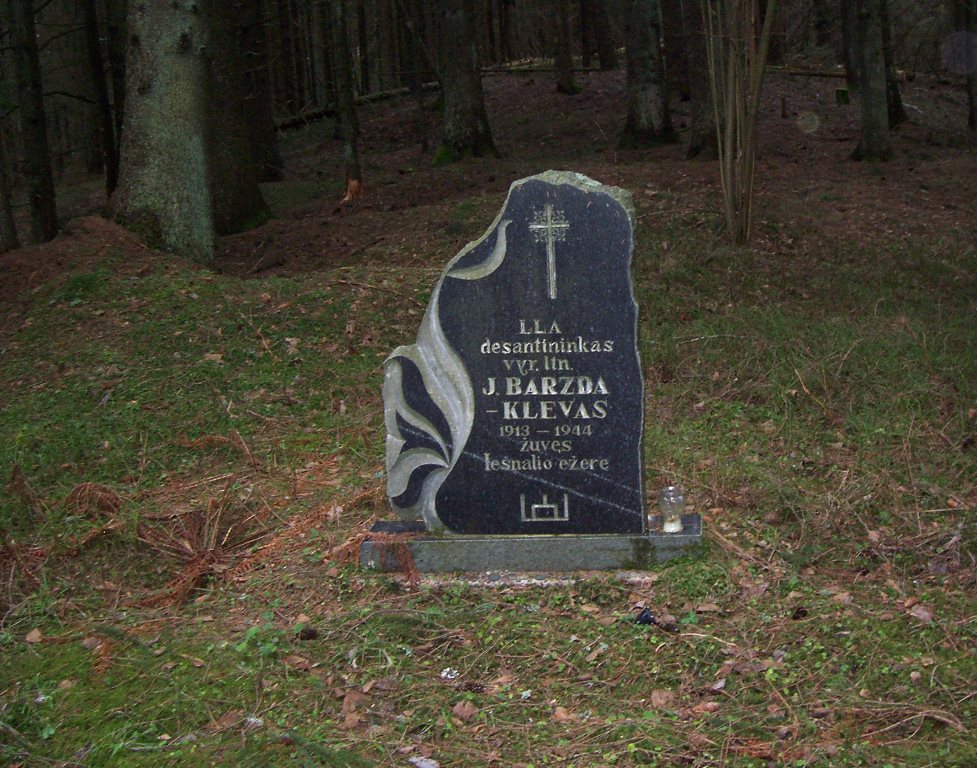 The symbolic gravestone honoring the notorious Nazi collaborator is part of the shrine area in his memory erected on state land of the Republic of Lithuania by resolution of the regional government.

Translated by Geoff Vasil for Defending History. English version approved by the author. The original Lithuanian text is at: