Posted on 24 February 2019 by Defending History

As “the day of the bulldozers” nears, Lithuania’s state “Property Bank” (Turto Bankas, often translated “Asset Bank”) is coming close to announcing the final contracts for the planned Convention Center in the heart of the Old Vilna Jewish Cemetery at Piramónt, in today’s Šnipiškės district of modern Vilnius. The derelict Soviet building slated for conversion (alongside construction of a large annex) is surrounded on all four sides by many thousands of Jewish graves left untouched by the Soviet authorities who pilfered all the stones for building works and ballast. There has been massive international opposition, including Lithuanian-origin rabbinical authorities worldwide, in addition to a petition started by Vilnius resident Ruta Bloshtein that is close to 46,000 signatures at the time of writing.

Julius Norwilla’s impressions after a meeting with the leaders of Lithuania’s state Property Bank now managing the convention center project in the heart of Piramónt cemetery? They are willing to talk, but they are not convinced  that “the Jews themselves” really care so much. In fact, a future “talking point” for a permanently controversial and damaging “convention center” will be that “Well, they found enough Jews they could manipulate to go along with it so what do you want from us?”

The takeaway? The time for major international pressure is now. The petition has attracted more than 45,000 signatures.

But to keep the process transparent, the Property Bank invited the wider public for a February 15th an open discussion on issues related to lease of the building, The meeting was attended by the state bank’s General Director, Mr. Mindaugas Sinkevičius and led by its key staff. The meeting started without formal introduction of those assembled, but four or five Lithuanian companies interested in the tender sent their representatives. With respect to Jewish historical interests, there were e only two representatives, Ruta Bloshtein and Julius Norwilla (both formally members of the Vilnius Jewish Community). Moreover, the European Human Rights Foundation sent their own representative. It seems there was at least one journalist, but no media report appeared afterwards. Indeed, it was the second public discussion on the same issue. The first one took place eight months ago, on July 2, 2018. For details of that meeting, see Andrius Kulikauskas’s report in Defending History.

According to the information provided by the Property Bank, the public tender for lease of “the Vilnius Congress Center “is to be announced in March 2019, and the tenant/operator in June 2019. In between those two dates, the development of the technical project will be going on and construction works will start in 2020 and continue through 2021. The handover to the tenant is to be in early 2022. The Property Bank envisages the first major public event already in January 2022. The tenant will be involved in various phases of the technical project preparation and reconstruction with a lease for ten years.

The state-owned Property Bank already purchased the plans made for the convention center by the Sigitas Kuncevičius Architecture Studio which have been published along with an artist’s visualization (Defending History lost no time in countering with its own visualization…). Looking more closely at Kuncevičius Studio plan, one can see the yellow dotted line marking the assumed borders of some five centuries of Jewish burials. For us in Lithuania, yellow in such discussions evokes the yellow stars-of-David imposed by the Nazis on Jewish slave laborers prior to their being murdered. And, guess what, the yellow dotted line runs along the edges of the building itself! There is not even an attempt to deny that there are Jewish graves on all four sides as proven by many documents, ground radar studies and other forms of scientific evidence. From the viewpoint of Western, and indeed Jewish civilization, it is clear that the derelict Soviet building is in the very center of the old Jewish cemetery, as was confirmed years ago by the American Embassy. In Jewish law, it matters not in the least that the bones have been stolen from the area underneath the derelict Soviet building, as eloquently explained in Prof. Shnayer Leiman’s now classic essay on the cemetery. It seems rather disheartening that in 2019 the official state Property Bank of a European Union and NATO member should try to “cut out” of an old Jewish cemetery its very heart, for a convention center where people would revel and cheer surrounded by thousands of graves, with this “heart of the cemetery” that is to become the convention center marked off by the stuff of yellow stars. For shame.

We were told at the meeting (as some kind of “concession”!) that on the ground floor the designer can install lighted windows to expose for the public view the Jewish burial grounds outside as artefacts of an ancient civilization (the building has no normal-spaced windows or natural light). The initial agreement from 2009 and consultations with the allegedly corrupt London-based Committee for Preservation of Jewish Cemeteries in Europe (CPJCE) foresee construction works only inside the existing building. Now we see clearly the trick. In order to add the huge annex on the right side of the existing building, the yellow dotted line was “adjusted” to extend it to a vast area where thousands of Jewish citizens of Vilnius, whose families purchased their burial plots in perpetuity, continued to lie buried.

To forge out of the Soviet era extravagant monstrosity a supposedly fit-for-purpose modern European convention center in an EU capital, a sum of thirty million euros (some $34,000,000 will be needed). 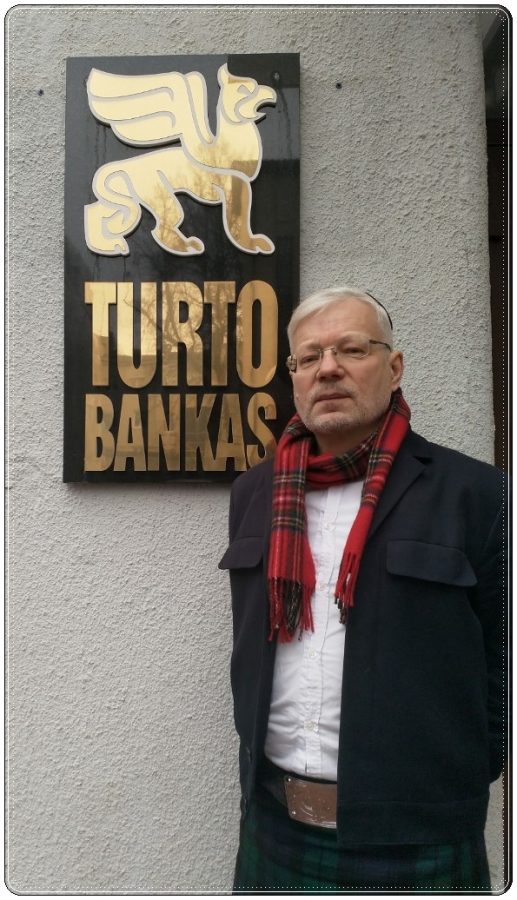 The “Jewish and human rights team” to speak, asked what measures would be taken to protect existing burials from the disruption and desecration to be caused by the builders, the tenants and indeed, all the partners in a convention center that could so beautifully be built anew in any of numerous plots in central Vilnius. The answer from the staff of the Property Bank came in a generally worded formulation. We were assured that all needed measures will be taken as it is stated in the initial documents and consultations. However, the “initial document and consultations” with the CPJCE (at least those what have been made public) do not specify anything, and the general words can only mean that there is no concern about how the burials should be protected. We tried to make clear to the group, that the Jewish and international protest will not go away and with time it will only increase. Minorities have rights in European countries and will use all possible legal means to prevent the convention center from being sited in the old Jewish cemetery. (If construction work of any kind does go ahead, that would be strict monitoring to expose each and every Jewish skeleton destroyed or removed (this was not possible a decade ago during construction of the “two green buildings” when heavy security and builders’ walls made it all a “secret site”. The General Director came over to me to assure us that the Asset Bank strives to make the object “as well as can be” and to achieve it they are open for discussion over the issue with broader Jewish representation.

For now, the government’s Property Bank (or “Asset Bank”), Turto Bankas, is insisting to the world that only “conferences, congresses and other cultural events” would be held there, not concerts. What does this mean? That when someone pays a fortune to rent the place for an international convention, they will be prohibited from singing anthems and other songs? That if someone starts to dance, the place will be closed and the event terminated? That a cultural event cannot include music, dance and myriad loud noises, cheering, clapping, hooting, and all the rest? Is it the idea of Turto Bankas that the world is comprised of utter idiots? The potential tenants have apparently already envisaged basketball games an. So much for “only cultural events”.

Would any of these discussions even be taken place if this were a cemetery with a five hundred year heritage of the Lithuanian people and its greatest scholars and heroes?

Speaking about the Jewish burials under and around the building, the PR types turn to well-worn code language and speak about “the specifics of the site”. The discussion among the tenants and staff members on the rigidness of restrictions went to the real point: it is wiser to demolish the building and “make a park”. We can only commend this insight. However, for the Jews under the turf of “the park” is one of the most sacred Jewish sites on the planet. We tried to make clear to the group, that the international concern to protect the Jewish burials will not go away. To the contrary, it will be only be increasing.

The solemn responsibility to protect the Jewish burials now falls to the Government of Lithuania which owns Turto Bankas (whether translated “Property Bank” or “Asset Bank”). The democratically elected Vilnius Jewish Community has repeatedly expressed its morally coherent opposition to a convention center in the old Jewish cemetery. If the other community, the Lithuanian Jewish (Litvak) Community, as it is formally called, is simply following government wishes and not standing up for elementary Jewish and humanistic rights, the powers that be should quite simply be asking themselves if that is a natural and just state of affairs, or if there are reasons for such a stance. Were there perhaps over the years some instances of coercion, secret reward or manipulation in obtaining such “Jewish permissions”?

One of the most amazing parts of this story is that it would cost vastly less to build a sparkling new, beautiful convention center not crippled from day one with a moral blemish that would forever result in major personalities from around the world refusing to enter the place. That does not have supposed restrictions forbidding concerts, festivals, holidays, the kind of human joy which lie at the heart of a convention center’s purpose?

But let me be clear, this is another side to all this. Jews and Jewish organizations worldwide are frankly morally obliged to show more determination. Especially now when the Property Bank tells us it is keeping the process and the options open.

If today there is a lack of determination and compliance and the buried people at Piramónt will be dug out and dumped somewhere we even will not know where, God forbid, then the next generation of Lithuanians will blame not the corrupt and greedy developers of Vilnius, nor the coercive and manipulative staff of the Lithuanian Government, but “the Jews”. Yeah, the Jews. As a collective subject, “the Jews” will be held responsible for (1) misleading the Lithuanian Government to believe there might be an “agreement with the Jews” and (2) the assumption that the worthless “permission” given to dispose of the ancient burials for development purposes on the basis of one shameful group in London and the locally corrupt entities constitute a thing of merit.

There is now a magnificent opportunity for Lithuanians and Jews of good conscience to unite to stop a corrupt for-profit scheme that would cause our country so much disgrace for years and decades to come.

With all its graceful hills and rivers and forested areas, Vilnius has any number of fine homes for a new national convention center. There is so much free space, full of splendid natural light, in harmony which the genius loci of our beloved city, on the eve of the 2023 celebration of its first seven hundred years.