VILNIUS—Lithuanian Jewish Community chairperson Faina Kukliansky today issued a powerful statement on the community’s website condemning the newest call from some top politicians asking the population to revere a national holiday in Lithuania, Užgavėnės, or Shrovetide, that falls this year tomorrow, 28 February 2017. Defending History has been (intermittently) monitoring the day since 2008, as part of the mission to monitor antisemitism and racism, and to cover those sectors of Human Rights that tend to be wholly ignored by the lavishly funded, official human rights organizations here in the Lithuanian capital.

In short, part of the celebration of Užgavėnės entails people dressing up and reveling in public in grotesque and not infrequently sickening imitations of Lithuanian Jews and Roma. In recent years, the “Jews” among them have tended to flaunt play money in line with the classic antisemitic stereotype of all Jews being obsessed with money. International attention was drawn to the issue by the 2008 article in New York’s Forward by Michael Casper, who had spent an academic year immersed in Judaic studies at Vilnius University. 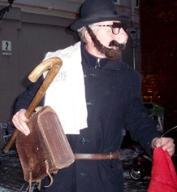 A typical celebrant of the Užgavėnės / Shrovetide annual holiday dressed up as a “Lithuanian Jew” in public celebration of the festival. Photo courtesy Michael Casper.

The full text of the Jewish Community of Lithuania statement is as follows:

Parliamentary Culture Committee chairman Ramūnas Karbauskis on his social media page invites everyone to celebrate Užgavėnės in Naisiai, Lithuania. Event organizers used illustrations reminiscent of antisemitic propaganda used by the Nazis. This was reported on the internet site of the newspaper Lietuvos žinios on February 24, 2017.

“At the invitation of the most influential member of parliament R Karbauskis [chairperson of the ruling Peasants and Greens Union Party], the public is called upon to celebrate Užgavėnės at the Naisiai location, associated with the politician, where, it seems, antisemitic ideas not only thrive, but are a part of everyday communication. Under the header of “Big Užgavėnės in Naisiai” on social media, the invitation and publicity for the event provides more than just a program of events, it also includes [antisemitic] sayings…”

It didn’t take long for the Lithuanian public to react. A wave of outrage appeared, as did antisemitic comments on the internet. One of the leaders of the governing coalition of the nation, after all, presented an invitation to celebrate Užgavėnės using fascist propaganda from 1939. “Lithuanians know the Holocaust began soon after that,” LJC chairwoman Faina Kukliansky commented. Ms. Kukliansky’s statement continues:

“Following the February 16 march in Kaunas where it was hard to tell the ultranationalists from the patriots, this is continuing now into Užgavėnės,” chairwoman Kukliansky said. “Is this the policy of the new ruling party? How are we to understand this? An innocent holiday celebration is transformed in the Naisiai announcement into clearly antisemitic jingoism, a return to the pre-World War II era.

“How should Lithuanian Jews feel?

“The Užgavėnės celebration is a holiday, and we do respect ethnology, but this is beyond Užgavėnės and even its masks, these are antisemitic Nazi masks that arrived in Lithuania from Hitler’s Germany. We would like to hear from Mr. Karbauskis’s lips whether he is or is not an antisemite. I am the chairperson of the Lithuanian Jewish Community and I am requesting an answer to the question about what his views are regarding Jews, if he has the courage to flaunt such masks in public.