If Israel Can Honor the USSR’s Unquestionable Role in Bringing Down Hitler, Why Can’t France and the European Union?

Posted on 11 November 2013 by Defending History

From the very beginning, the source of our problems is to be found in an inaccurate narrative of World War II that is rather widespread here in France. This can be explained in part by France’s  position as a de facto ally of the Axis at first, starting from the time of Petain’s surrender to Hitler’s forces in 1940. It was rather late in the war that a substantial segment of society in the country per se (as opposed to the heroic resisters who had joined the Allies outside surrendered France’s borders) became a stalwart ally of the United States and Great Britain, at a time when that was by a confluence of circumstances most convenient for all three countries.

The museums, monuments, memorials and teaching in schools relay a less than candid historical narrative. In the minds of French citizens the Nazis were vanquished by the USA, Canada, Britain (more precisely the United Kingdom of Great Britain and Northern Ireland) and France (in reality, though, with negligible resistance and a negligible role of the Free French forces mainly comprising local non-French residents of colonies). In the popular version, the liberation of Europe started only in June 1944 with D Day.

This fallacious narrative, which plays down both the moral and strategic import of the Nazi-puppet Vichy government is unfortunately well rooted in the minds of French people up to the highest level. That is why, in June 2013, I proposed a reform in the content of school curricula and the texts in museums and accompanying public monuments.

The monuments to the allied forces incredibly exclude all mention of the Red Army and the USSR. And as if by some quantitative compensation, the role of De Gaulle and his forces, often negligible, is thereby magnified out of all proportion in some weird form a psychological and quasi-historical zero-sum game.

Such a misrepresentation of facts in Western Europe is but one example of the distortions that one way or another pave the way for an intellectual and political climate that welcomes without scrutiny the fallacious equation of Communism and Nazism. That equation, in turn, inexorably and immediately impacts upon the question of the uniqueness of the Holocaust in World War II era Europe.

The defense of the uniqueness or singularity of the Holocaust, which can be readily demonstrated by any number of empirical measures, must now, deep in the second decade of the twenty-first century, start with the rejection of the equation between Communism and Nazism.

Let us here cite one widely overlooked event of recent times, an event that took place in 2012.

I refer to the initiative of Israel in building and inaugurating a monument, in 2012, to the Red Army’s defeat of Hitler. It is a powerful gesture in favor of historic truth and its recognition in the face of the many permutations, changes and developments on all sides both before and after World War II. 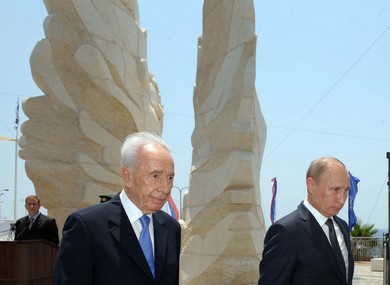 Presidents Peres of Israel and Putin of Russia unveil a new monument in Netanya, Israel, to honor the Red Army’s role in the defeat of Nazi Germany. Photo: Avi Ohayon / GPO.

On 25 June 2012, Israeli president Shimon Peres and visiting Russian president Vlaadimir Putin — putting aside many irksome bilateral and multilateral issues — together unveiled a new monument in Netanya honoring the Red Army for its huge role in bringing down Hitler and Nazi Germany. The Jerusalem Post reported that the idea came from Israeli prime minister Benjamin Netanyahu during an earlier visit to the Russian Federation.

Here are some excerpts of the statement read out at the unveiling of the new monument:

Welcome to this  victory monument commemorating the Red Army Victory over Nazi Germany.

The state of Israel and the Jewish people have a debt of gratitude to the Russian nation and the other nations of the former Soviet Union and to the Red Army forces for their sacrifices and bravery that brought the defeat of the Nazi enemy during the Second World War and the end of the Holocaust of the Jewish people.

The monument is comprised of two elements representing the transition from darkness to light: One visually depicting the period of the war and Holocaust and the other symbolizing victory, hope and peace. It was erected in cooperation with the government of the State of Israel, the United Israel Appeal, the Russian Jewish Congress, the municipality of Netanya, and the Development and Tourism Corporation of Netanya.

Inspired by the Israeli example, I naively proposed to French MPs the erection of a similar monument to the Red Army war effort without which there would not have been a D Day, an American landing or a liberation of France from Vichy nazification.

However this effort is difficult in France since it will necessitate a return to the whole truth, one part of which entails the sad fact that this country brought substantial help to Nazi Germany as de facto member of the Axis having paved the way for a lengthening of the war and the resultant massive increase in numbers of people —and civilians — killed on all sides.

But some slight progress was seen this month, on 6 November, when National TV finally showed scenes of French soldiers fiercely fighting the US army during Operation Torch. The memorial at Caen at last extended the scope of its exhibition but hardly came close to admitting the empirical singularity of the Holocaust. This singularity is a historic fact, with no prejudice or mitigation of the massive brutality suffered by others in other events and episodes.

The fact is that the narrative of World War II in Western Europe is a direct result of the Cold War and the continuing inability to enunciate the truth about the Soviet war effort between 22 June 1941 and 9 May 1945.

I frankly do not understand why even the Russian Federation fails in its now extensive contacts with the West to make clear the role of the Red Army in World War II.

Within the European Union we have to face the conservatives, and rightists, and far-rightists who think that fight against the evil of Communism is more important than any other event in European history, including the clear memory of the one massive genocide of a European people during the last war. And here we encounter a new difficulty: too many of the leftists and greens whose new priority is a focus on anti-Israel politics, are now blinded from anything that brings to mind the destruction of European Jewry by the Nazis and their allies of many stripes and circumstances across a huge swath of our European continent.

Didier Bertin is a banker and specialist in economic and political risk assessment, and founder of the Society for the Promotion of a New Model of Human Rights in Europe.