Posted on 27 March 2019 by Defending History

‘Sad Day for Lithuania, and for Honest Holocaust Commemoration in Years Ahead’

VILNIUS—At 1 PM on Wed. March 27th, a Vilnius Administrative Court judge read out the court’s ruling dismissing the query of US resident Grant Gochin over Lithuania’s state glorification of Nazi collaborator Jonas Noreika, active during the Holocaust in the region where Gochin lost around 100 relatives. The court said Mr. Gochin had no material interest, ruled that the state-sponsored Genocide Center had answered his query completely, without bias, and without abuse of power, in effect further enshrining in law an EU/NATO state’s glorification of Holocaust collaborators and perpetrato

rs via the financing of ultranationalist and far-right history centers and departments determined to preserve the national hero status of Holocaust collaborators. Whenever government or municipal officials are asked about the numerous street names and plaques honoring collaborators, the invariable answer is that it is all in fact a matter for the experts at the Genocide Center.

Does the ruling reflect a new East European Holocaust sensibility that holds that participation in the destruction of a country’s Jewish citizens during the Holocaust was some minute detail that must not interfere with making heroes out of the local perpetrators and collaborators?

Mr. Gochin’s academic specialist, Dr. Andrius Kulikauskas was on hand along with attorney Rokas Rudzinskas. Of the Genocide Center’s staff, only historian Dr. Arūnas Bubnys turned up, sitting nervously in the small gallery surrounded in part by first and second generation Holocaust survivors who turned out to hear the verdict that the Western embassies, human rights organization and official (state-sponsored) Jewish community thought not worth sending an official representative to hear. By contrast the local Vilnius Jewish Community had two observers on hand.

JTA report is picked up by some Israeli papers but not one major American media outlet, general or Jewish… Why is that?

A week after the verdict: Utter silence from the US, UK and Israeli embassies in Vilnius, and from the “Red-Brown” Commission (which has affiliations with the Genocide Center) and its foreign members representing Yivo and the American Jewish Committee.

Moments after the verdict, the Mickevičius Library at Trakų Street 10, where a public discussion was scheduled for 4 PM on the following day, Thursday 28th, cancelled the event. A spokesperson for the library said that it was “on the demand of the Genocide Center.” Dr. Kulikauskas asked people to turn up for the discussion in any case. Asked for comment after the verdict, he said: “It was a formal victory for the Genocide Center but a substantial victory for its Lithuanian and Litvak opponents, as could be seen from the ashen frown of [the Genocide Center’s] Arunas Bubnys and the proud dignified faces of the first and second generation Holocaust survivors on hand.” 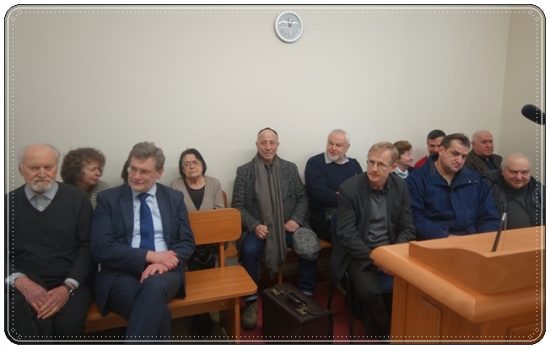 A moment before the courtroom clock strikes 1 PM: Genocide Center’s chief historian Dr. Arūnas Bubnys (front row third from right) was the only GC official to come and hear the verdict. 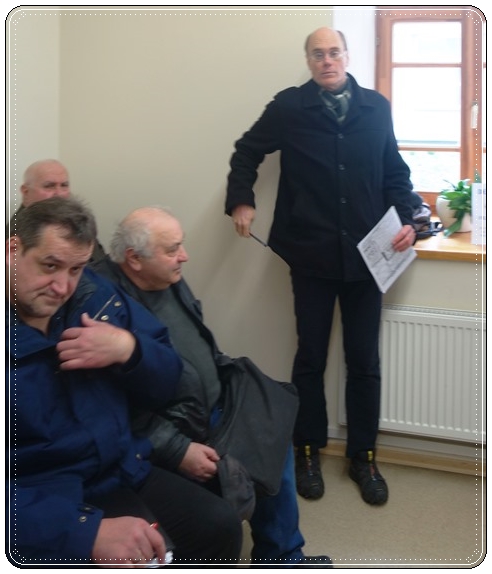 Academic papers on the “Double Genocide” movement and its corollaries including the glorification of perpetrators of the Holocaust.