BELGRADE—The president of Serbia, Tomislav Nikolic, today awarded a Golden Medal for Merit to Dr. Efraim Zuroff, the Simon Wiesenthal Center’s chief Nazi hunter and its Director of East European Affairs, as part of the celebrations of Sretenje, the Serbian republic’s national day. The rationale for the award, which was granted to Dr. Zuroff for “exceptional achievements” included his “selfless dedication to defending the truth about the suffering of Jews, and also Serbs, Roma and other nations during World War II.”

The American born Dr. Zuroff, who moved to Israel decades ago, is only the second Israeli citizen to win this medal. The first was Israeli justice minister Yosef (Tommy) Lapid, who was himself born in Serbia. More information on Dr. Zuroff’s current projects, including a major new book on the Lithuanian Holocaust co-authored with a Lithuanian writer, is available on the Operation Last Chance website. 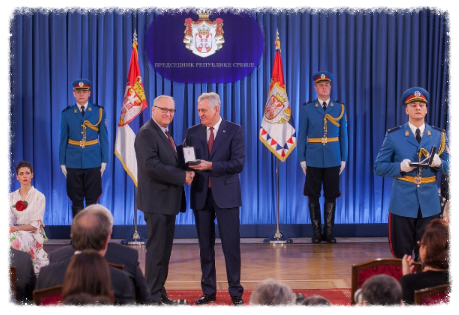