Dan Stone’s “Goodbye to All That?” Has Discussion on Battle of the Declarations

Posted on 3 May 2014 by Defending History


Dan Stone’s new book, Goodbye to All That? A History of Europe Since 1945 (Oxford University Press, March 2014) has some discussion on the “Battle of the Declarations” in Europe: the Prague Declaration (“PD” of 2008) and the Seventy Years Declaration (“SYD” of 2012).

Each of the declarations has its own website: the PD at praguedeclaration.eu; SYD at: seventyyearsdeclaration.org. The SYD was produced as an initiative of Defending History, which has its (openly partisan) section on the Seventy Years Declaration, its text in European languages, and a page of critiques of the Prague Declaration. The SYD’s launch was greeted by the then Lithuanian foreign minister’s “moustache comparison” and his attack on the eight Lithuanian parliamentarians who had signed it. The 2012 documentary film Rewriting History focuses on the origins of the Seventy Years Declaration.

The following is a brief excerpt from Dan Stone’s Goodbye to All That? from page 281: 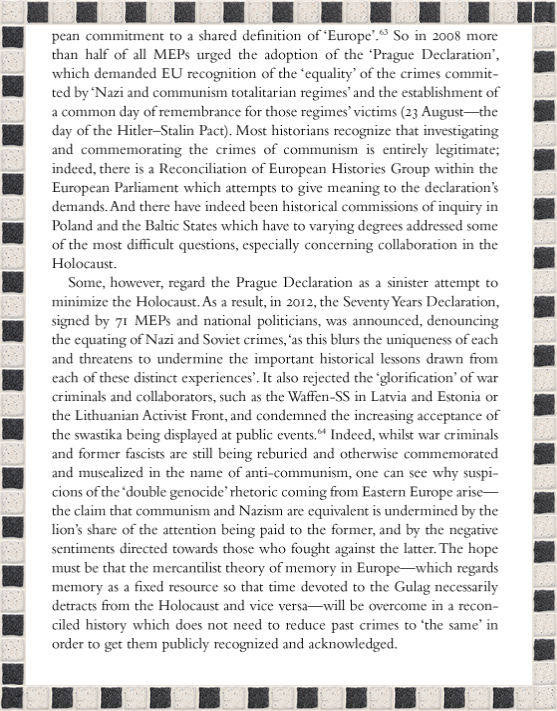 Professor Stone’s new book also cites (footnote 57) Defending History’s page on the 2012 reburial by the Lithuanian government of the 1941 Nazi puppet prime minister as an example of the disturbing regional tendency to glorify Nazi collaborators as part of the ongoing attempted revisionism.