The half-page article on the “Business” page of the Baltic Times (dated 4-17 April 2013 but widely available this week here in Vilnius) carries at its end the words “This is a paid advertisement.”

But these words do not succeed in mitigating the moral responsibility of the increasingly ultranationalist, far-right newspaper in disseminating hate material against any minority, least of all of in an EU / NATO member state. The inherent equality of peoples and their races and languages and national and personal identities are an inseparable component of what the European Union and NATO are all about.

The insinuation that today’s Russian speakers in Latvia are virtually all related to Soviet or Russian secret police, and the advocacy of the position that human beings born and raised in Latvia should migrate because of their language or ethnicity, is not the sort of material that appears in mainstream English language newspapers. The problem is that by masking the hate against Russian speakers with headlines like “Cold War II” many naive Westerners unfamiliar with the region do not even realize that the publication being supplied in their hotel in English has any ulterior agendas.

Of course the poor recent record of Russia on many issues, and the need for NATO to be vigilant on behalf of the security and independence of all its members, are very legitimate issues for discussion and attract serious and intelligent debate in the free world’s media. But what is at work here is something else: an attempt to delegitimize, stigmatize and ultimately ask for the expulsion of a minority using the (very real) geopolitical issues of our times as a mask.

Many of Latvia’s Russian speakers (themselves from a great diversity of national groups) were born and raised in the country, and in some areas hail from many generations of local residents. But that is not the point: We are all resident where we are resident, and human rights are universally applicable.

It is particularly despicable that the article uses the “Jewish card” (an obscure reference to alleged desecration of a Jewish cemetery by “Russians” to discredit “Latvians”), especially when the Latvian government has been complicit in honoring the country’s Waffen SS and thereby further promoting at atmosphere of ultranationalism, neo-Nazist supremacism of one race or language over another, and the glorification of Hitler’s allies.

It is high time for the Baltic Times to be challenged, and for hotels and other institutions catering for Western clients to be held to account for the kind of literature they distribute. They do themselves and the honor of the hard-working, honorable people of Latvia no favors. 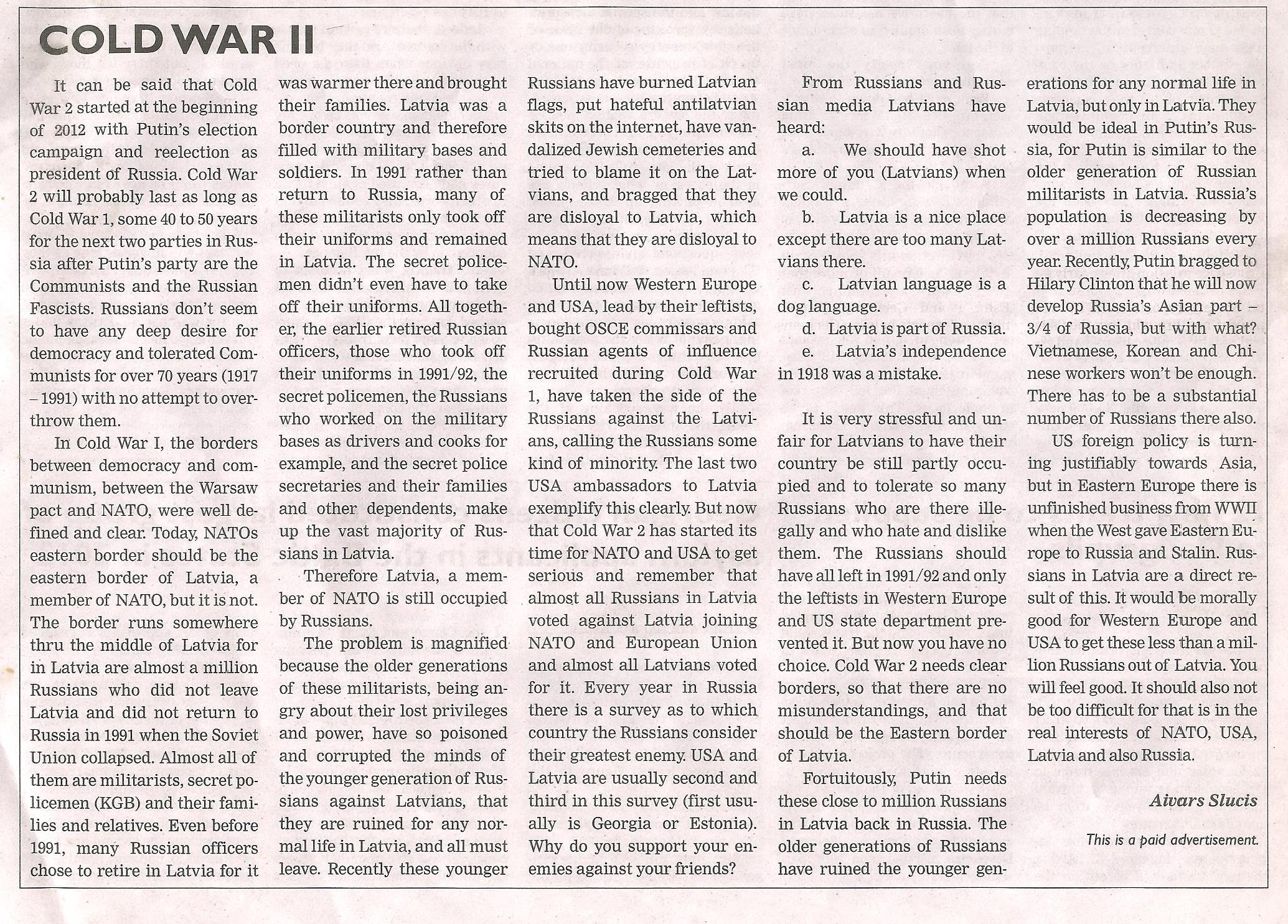