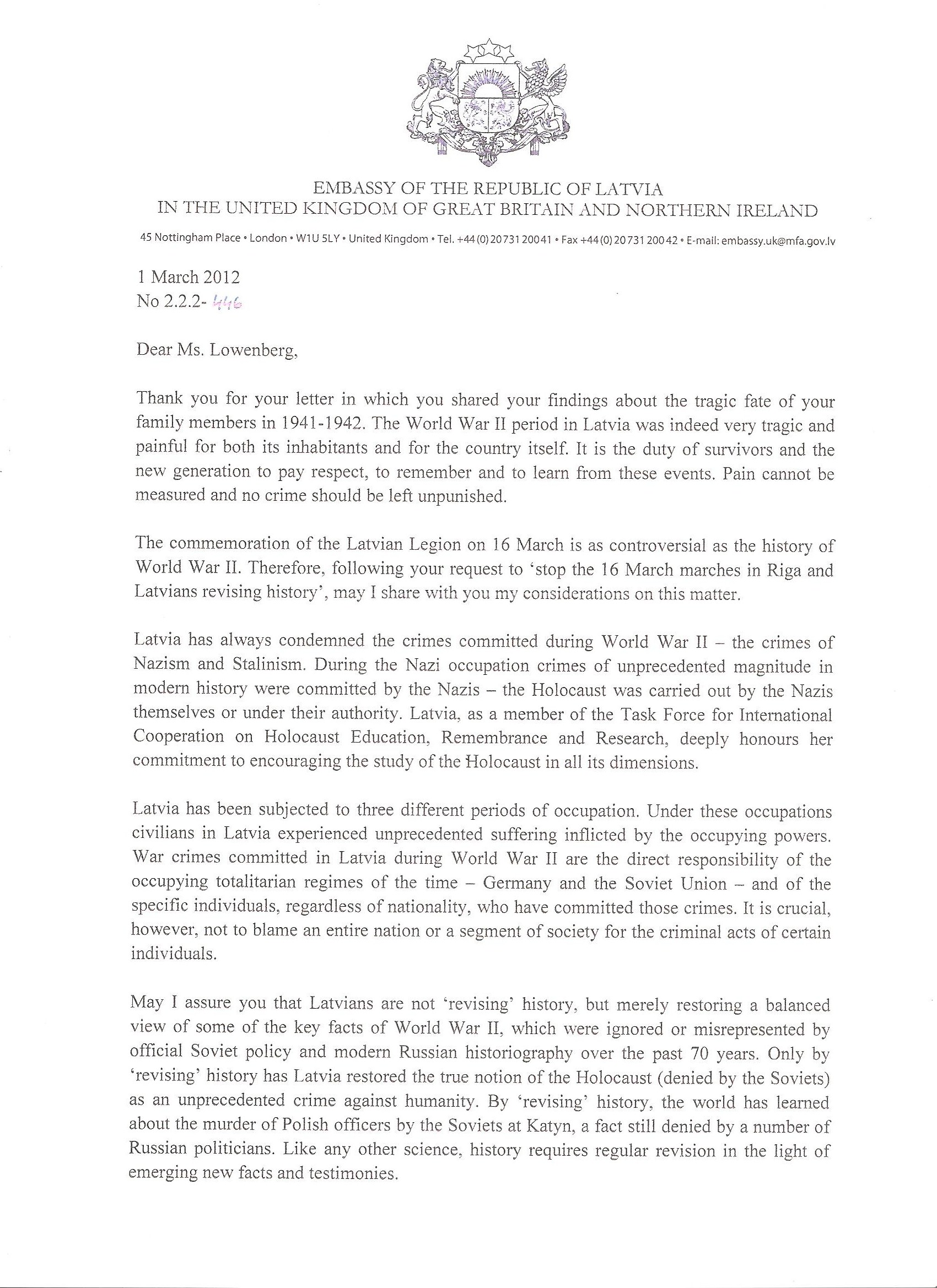 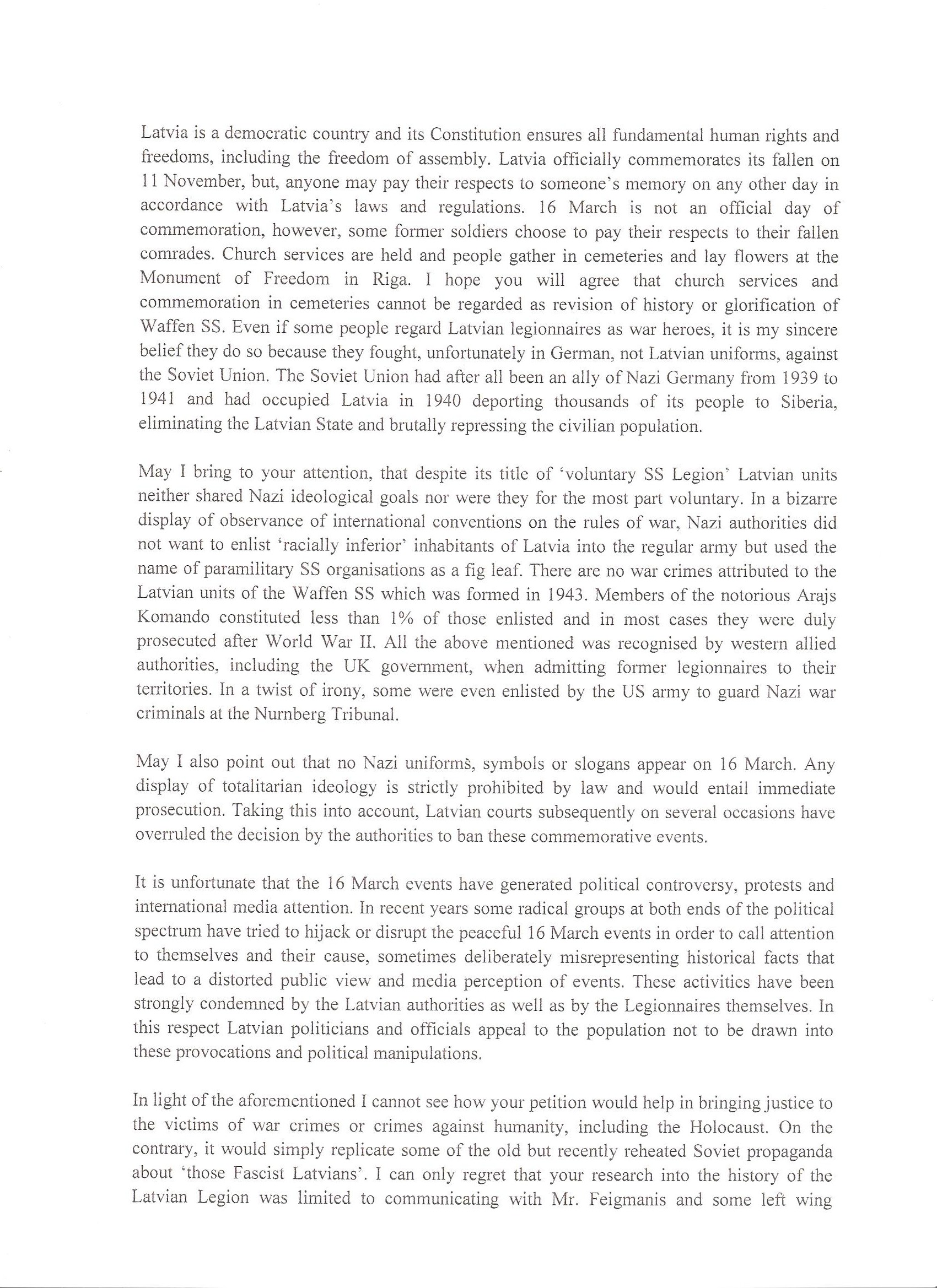 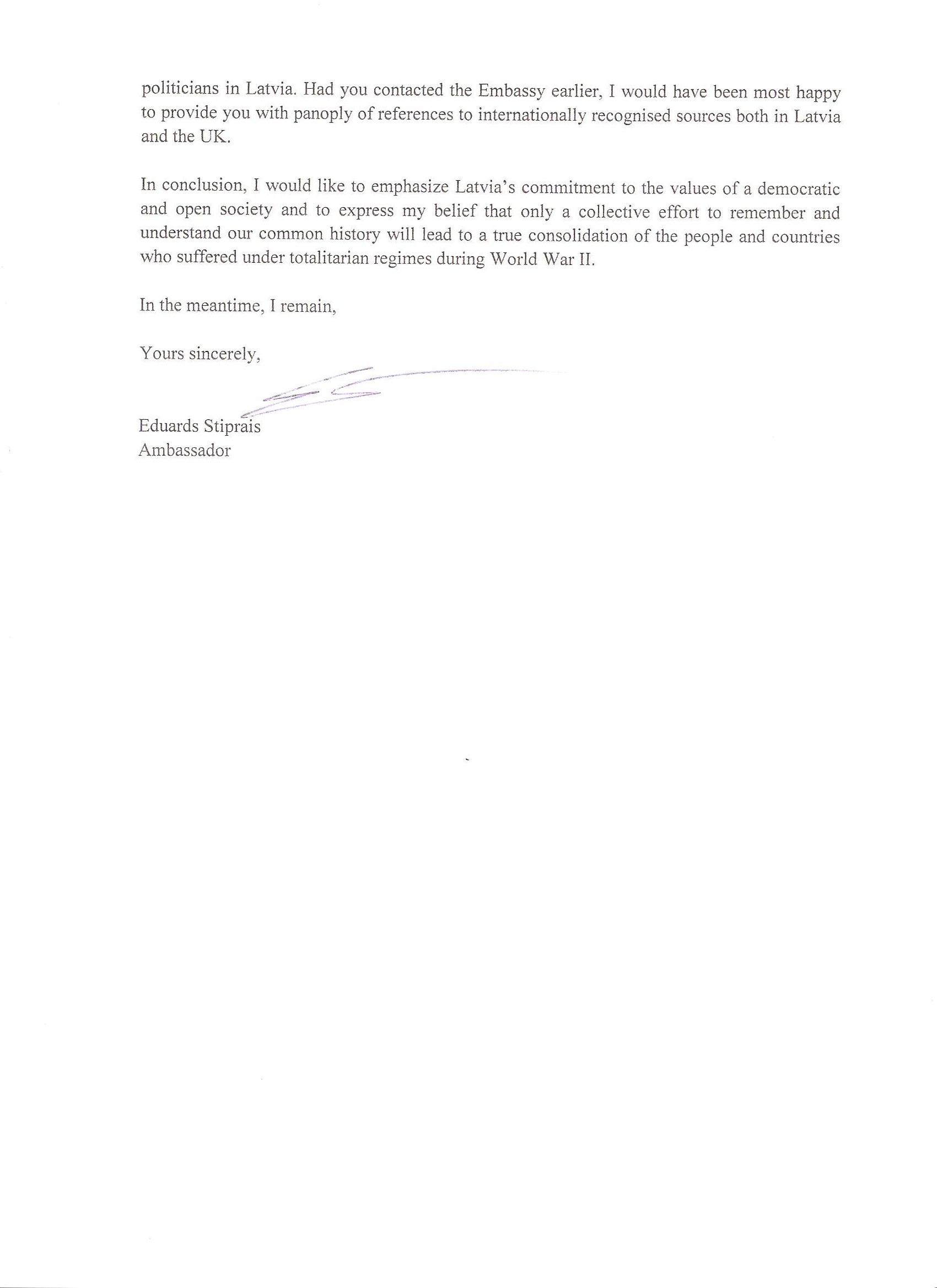 Thank you for your letter of 1 March 2012 explaining why you cannot support the petition, ‘Stop the 16th March marches in Latvia and Latvians revising history’. I appreciate the time you have taken out of your busy schedule to explain your arguments to me. In the same spirit, I feel it is important to respectfully point out that glorifying any pro-Nazi forces in today’s European Union and NATO alliances is unacceptable, whether the men now being honoured as ‘heroes’ and ‘bowed’ down to by your prime minister, were murderers, criminals, or simply just pro-Nazis.

Latvia needs to be glorifying its real heroes who saved Jews and other civilian victims from the Nazis and their local allies, not a group of men, who amongst them were former Arajs commandos and auxiliary police who played an active role in the mass murders of 90% of Latvia’s prewar Jewish population in 1941-1942, murdering close to 70,000 Jews. Among the murderers were not a few men who later joined the 15th and 19th divisions of the Latvian SS in 1943, the 15th division being the most decorated of all SS divisions. This is frankly not one of the high points in Latvia’s long and proud history.

As mentioned in my last email to you of the 16 February 2012, it was as a direct consequence of my first visit to Riga last October that I started the petition ‘Stop the 16 March marches in Riga and Latvians revising history!’ as I sincerely believe glorification of pro-Nazi armed forces during World War II has no place in a European Union / NATO / OSCE country.

The petition, launched 20 January 2012, ninety years to the day from the date of birth of my uncle, Paul Theodor Loewenberg, a native of Halle an der Saale, who at age 19 was sent to the Riga Ghetto on the 4 October 1941, is as much an act of commemoration of the victims of Nazism as it is a tribute to the European parliamentarians, including a number from Latvia, who wisely and courageously signed on the 20 January this year 2012, the Seventy Years Declaration, commemorating Wannsee, a declaration which specifically rejects glorification of Latvia’s Waffen SS, along with Estonia’s Waffen SS and the Lithuanian Activist Front (LAF) in Lithuania.

The petition I launched has, in little over a month, gained from around the world over 5,800 votes and the figure is mounting by the hour, indicating that I am not alone in believing that such glorification is terribly wrong. One should also add that the ECRI, the European Commission against Racism and Intolerance had already in 2008 explicitly stated, ‘All attempts to commemorate persons who fought in the Waffen SS and collaborate with the Nazis should be condemned. Any gathering or march legitimising in any way Nazism should be banned’. The ECRI reiterated the same in their most recent report about Latvia released on the 21 February 2012.

As these ‘heroes’ march on the 16 March with Latvian politicians and are given a sermon in church and flowers, when officials and the prime minister argue that these men are not criminals as the SS Latvian legion that these men, killers among them, joined in 1943 (after they and/or colleagues had murdered 80,000 Jews in 1941-1942 on Latvian soil in their capacity as Arajs commandos and auxiliary police), was acquitted of crimes against humanity in the 1950’s by US courts, I ask them and you to consider the following:

1. Many of the worst Latvian killers served in the Latvian Security Police prior to joining the Legion. Honouring such persons is a travesty of justice and a whitewash of their heinous crimes.

2. The Legion fought under the Nazi high command for a victory of the Third Reich. They do not deserve to be honoured for fighting for a victory of the most genocidal regime in human history. Ironically, such a victory would have been a disaster for Latvia since the Nazis had no intention or plan to grant Latvia independence. Historians know very well of the Nazis’ plans to do away with the Latvian (among Baltic) peoples after the planned-for victory. There would have been no Latvia to become independent in 1991.

3. About one-third of those who served in the Legion were volunteers, many of them those who had served in Latvian Security Police units which had actively participated in the mass murder of Jews in Latvia and in Belarus, such as the infamous Arajs Commando mass murder squad.

4. When Latvian SS killed Soviet soldiers they in turn allowed Nazis on the western front to kill more British and American soldiers and in turn allowed Auschwitz and other concentration camps to continue their heinous crimes against humanity. During the years of the Latvian Holocaust, the Soviet Union was in alliance with Great Britain, the United States and other Western democracies, whose ranks Latvia has now joined.

5. Democratic Latvia should not glorify those willing to give up their lives for a victory of the Third Reich. The Latvian Righteous Gentiles would make much better role models for today’s young people in Latvia and for future generations.

6. The ultranationalists who support the march are the ones who are seeking to rewrite the historic narrative of the Holocaust in Latvia in order to hide or downgrade the crimes of local Nazi collaborators and promote the canard of equivalency between Communist and Nazi crimes.

As these men march from the main Latvian Lutheran Church towards the symbol of Latvian independence — the Freedom Monument in Riga’s central square on 16 March 2012 this year, will any of these men and politicians shed a thought for their Latvian murdered compatriots who happened to be Jewish? Will they remember how 25,000 of them were in the fall of 1941, over two weekends, marched down Riga’s streets from the ghetto to Rumbula, shot and thrown in to pits using the ‘sardine method’? Will they say a prayer for them as part of these proceedings?

As the ambassador for Latvia, a country that is a member of the EU and NATO, I feel it is necessary to ask you once more to regard with respect the conclusion of the European Commission against Racism and Intolerance concerning the 16 March events in Latvia:

‘All attempts to commemorate persons who fought in the Waffen SS and collaborate with the Nazis should be condemned. Any gathering or march legitimising in any way Nazism should be banned.’