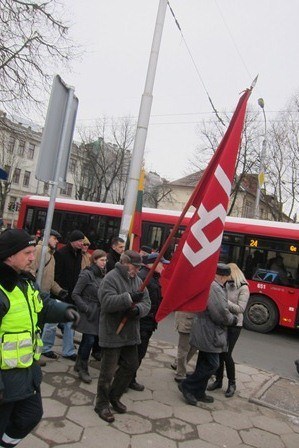 Nevertheless, the loudest and most repeated shouts were of Lietuva Lietuviams (“Lithuania for Lithuanians”), which is offensive to the nation’s Belarusian, Jewish, Old-Believer, Polish, Russian, Roma and other communities. 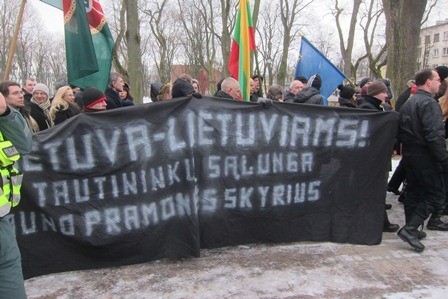 “Lithuania for Lithuanians” followed by affiliation assignment to the industrial agricultural section of the Union of Nationalists…. 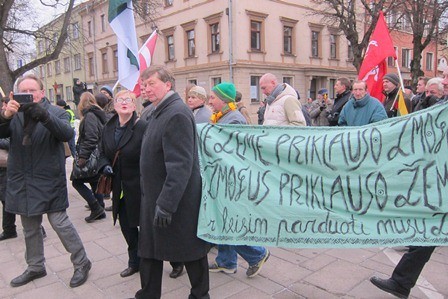 There were two major incidents noted. First: the police demanded the names and addresses of a number of anti-fascist demonstrators, mostly from the Antifa movement. Our question, why the name and addresses of the fascists were not taken instead, went unanswered. [At the same time, the police took enormous care to protect two of the small number of anti-march protesters: Dr. Efraim Zuroff and myself.] The second incident involved Defending History contributor Evaldas Balčiūnas who was accosted and assaulted by an unknown number of neo-Nazis following the march, but is reportedly in good health at present. 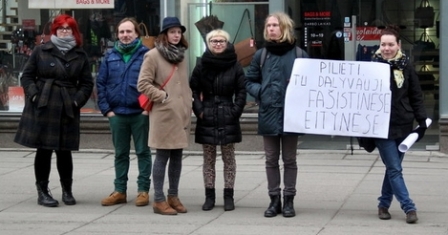 “Citizens! You are taking part in a fascist march!”

Another prominent protester was the anti-fascist historian and Defending History contributor, Evaldas Balčiūnas. 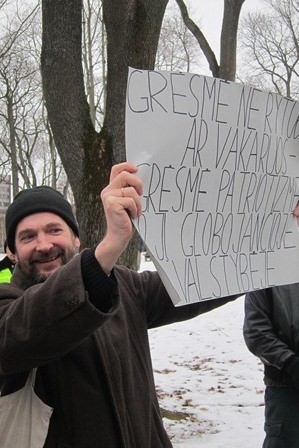 “The danger isn’t in the East or the West, the danger lies in nationalism and the state fostering it.”

After the initial incident, the visible opponents were limited to Dr. Efraim Zuroff, director of the Simon Wiesenthal Center Israel office, who is a well-known anti-Nazi campaigner in the Baltics for a quarter century and six or seven Israeli students now studying medicine in Kaunas (most of whom left the event early). Two of the editorial staff of Defending History were also on hand during the entire event: Geoff Vasil (Vasiliauskas) and myself.

If the day’s very sad event — official municipality allocation of the city center for the neo-Nazis on the nation’s proud 1918-based Independence Day — did have a single possible hero, it was Chaim Bargman, a prominent member of the Kaunas Jewish Community, historian, guide, researcher and author, who bravely took on each and every challenger with calm but solidly backed-up historic facts on the history of Lithuanian Jewry, and particularly that of Kaunas (Kovno), the nation’s second city. 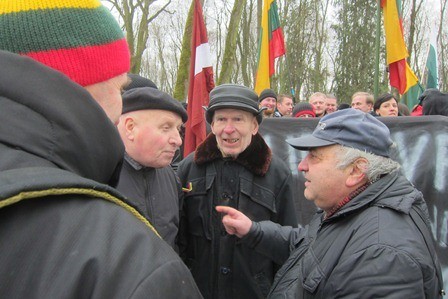 Finally, the renowned film director Saulius Beržinis, whose many films expose both the  truth about Lithuanian participation in the Holocaust and the many more recent efforts to obfuscate it, was on hand interviewing fascist leaders for future documentary, boldly crossing police cordon lines to speak with pro-fascist leaders who know (and loathe) his work. 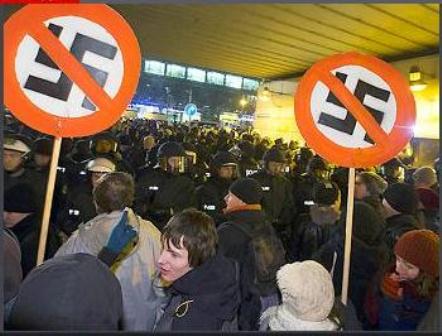 DRESDEN: Quite a contrast with events in Dresden, Germany, two days earlier, when thousands of citizens turned out to prevent neo-Nazis from monopolizing the city center…

But the absence this year of swastikas (there were plenty of current fascist symbols on flags and signs, not least the so-called three-legged “flaming swastika”), the very slightly larger number of anti-Nazi protesters (still tiny no matter how the counting is done), and the excellent police order-keeping operation (notwithstanding the unfortunate harassment of the Antifa participants) did not do much, all in all, to minimize the disgrace of a democratic, EU and NATO ally allocating the city center of its interwar capital (and now second city) for the neo-Nazis, in an official municipal permit confirming official support for the local Nazi heritage.

“Give back to the Homeland what you must! Be a free nationalist activist!”

The tangible signs of that were not hard to find at today’s event. First, the lead banner of the parade featured neither Gediminas nor Vytatuas, nor any impressive figure from modern times, such as Dr. Jonas Basanavičius, but instead the 1941 Nazi puppet prime minister Juozas Ambrazevičius (Brazaitis), whom the Lithuanian government reburied with full honors and glorified in a series of state-sponsored events in May 2012, less than one year ago. Ambrazevičius personally signed documents committing his city’s Jewish citizens to a concentration camp (actually it was a mass torture and murder site where thousands perished in the very city of his “provisional government”), before going on to sign the German orders for all of the city’s Jews to be forcibly relocated to a ghetto (in preparation for genocide). 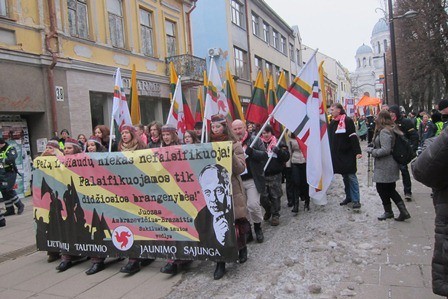 The headline banner featured the Nazi puppet prime minister of 1941, Juozas Ambrazevicius (Brazaitis), who signed orders ordering the Jews of Kaunas to a murder/concentration camp and the remainder to incarceration in the Kovno Ghetto.

That the same Nazi puppet prime minister so honored in 2012 was  featured on the lead banner of the 2013 February 16th independence day march speaks very poorly of authorities’ judgment. Moreover, the city’s major university, Vytautas Magnus University, continues to flaunt a lecture hall name and bas relief honoring the Holocaust collaborator, on whose watch murder of thousands of Jewish civilians got underway even before the arrival and/or consolidation of German rule in dozens of locations. The linkage of the modern Lithuanian state with the honoring of a Nazi puppet prime minister, underlined by last May’s events glorifying him, a Kaunas professor’s praising the supposedly resulting “drama of Lithuanian history,” the bas-relief and lecture hall name at Vytuatas Magnus, and the lead plackard at today’s February 2013 neo-Nazi parade made for a most unpleasant series of linkages.

But that wasn’t all. Parade marshals continued to use the white armband as their chosen form of identification, evoking memories of the 1941 white-armbanders affiliated with the Lithuanian Activist Front (LAF) and other Hitlerist groups that unleashed the Lithuanian Holocaust, which had the highest percentage of Jews killed of any country with a major Jewish population in all of Holocaust-era Europe. To local Holocaust survivors interviewed over the years, the white armband is even more hurtful than the swastika, evoking the memory of treachery by neighbors with whom there had been excellent relations from time immemorial. 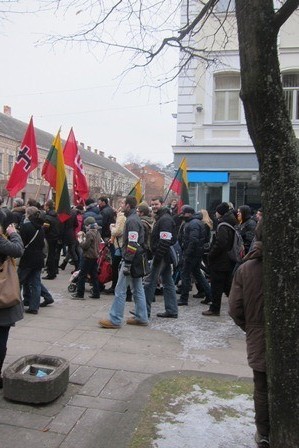 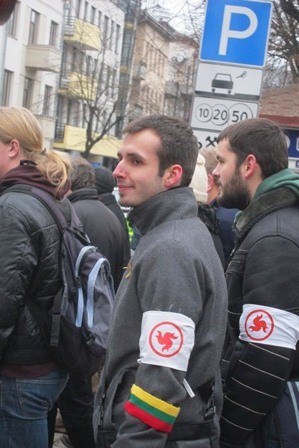 There were numerous sieg heils at various points in the march by individuals (not led by the white-armbanded parade marshals whose main job seemed to be to lead in chanting). 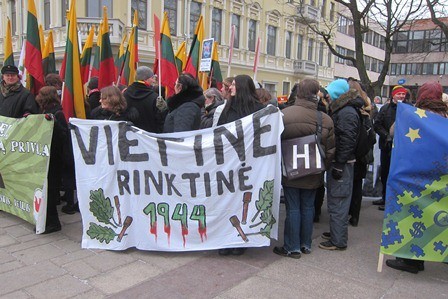 Mourning the demise of a Holocaust-era fascist paramilitary organization

But if there were any lingering doubts that the “patriotic youth movement” was inspired by Nazism  and obsessed with the Holocaust (if the sign featuring Ambrazevičius was somehow not enough), such doubts were dispelled by a number of young men who flaunted, as if it were a flag, the Lithuanian translation paperback edition of Norman Finkelstein’s The Holocaust Industry.

At the very end of the event, when the small Defending History team was preparing to leave the scene, a young woman approached us with tears in her eyes. She explained that she had meant to honor her country’s independence and pride and had no idea of the pro-facist, pro-Nazi-, racist, antisemitic and homophobic undertones and symbolism of much of the day’s events. She thanked the small number of protesters, and particularly Chaim Bargman, whose discussions she had been tuning into, for helping her to see some plain and simple things. Our talk concluded with the hope that on February 16th 2014, the Kaunas march would proudly include the heritage of all the peoples of the Lithuanian lands and would celebrate the rich and harmonious tapestry of the nation’s proud multicultural heritage. We discussed the idea that instead of honoring Brazaitis and other Holocaust collaborators, the 2014 march would honor the inspirationally brave Lithuanians who just did the right thing, risking everything to save an innocent neighbor from the Hitlerist LAF and the provisional government of the Nazis. 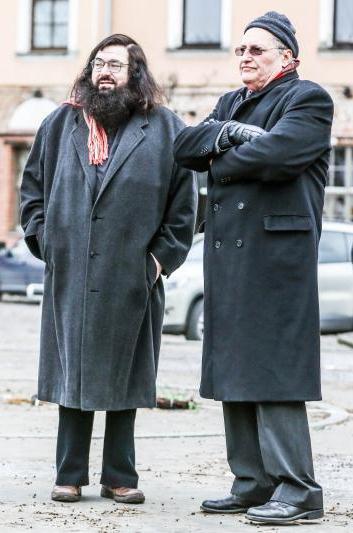 Dr. Efraim Zuroff (right) and the author of this article monitoring the Kaunas march on 16 February 2013

Photographs in this article may be freely reproduced with accreditation to DefendingHistory.com