Posted on 12 December 2014 by Defending History

Waltzing with the Enemy: A Mother and Daughter Confront the Aftermath of the Holocaust by Rasia Kilot and Helen Mitsios. Urim Publications: Jerusalem 2011, 288 pp. Amazon.com. Kindle.

In Waltzing with the Enemy: A Mother and Daughter Confront the Aftermath of the Holocaust by Rasia Kliot and Helen Mitsios, the authors write a dual memoir of survival and healing. The mother, Rasia, was born into upper class comfort in Vilna (today Vilnius, Lithuania). Her daughter, Helen Mitsios, was born in Montreal, Canada. The dual structure – the first half is titled “Rasia’s Story” and the second half is labeled “Helen’s Story” – works very well.

Most Holocaust memoirs focus on the survival of the protagonist. Elie Wiesel’s Night, Primo Levi’s Survival in Auschwitz, Imre Kertesz’s Fatelessness all end at the moment of liberation or soon after. This is typical and goes across Holocaust literature – from the most literary and introspective to the most basic first-person accounts published by presses devoted to preserving the experiences of the witnesses to the greatest mass-murder of the twentieth century. But few of these books continue with the post-Holocaust lives of the protagonist. Mostly, as Primo Levi writes, it’s because the greatest “adventure” of his life ended when the camp was liberated and he returned to Italy to run a paint company.

The strategy of linking the stories of the mother and the daughter gives support to the notion that the Holocaust destroyed two generations. (Now, there is much research devoted to the effects of the Holocaust on the third generation.) Certainly, the story that Rasia describes is as horrific and hair-raising as any Holocaust memoir. What adds interest to this story is the Lithuanian setting. Much of course has been written about the Shoah in Poland where an estimated ninety percent of its three million pre-war Jewish population were murdered. Hungary, because its Jewish population was not deported to the death camps until mid-1944, has a very high percentage of survivor writing. (Both Wiesel and Imre Keresz won Nobel prizes for recounting their experiences in Auschwitz.) But Lithuania’s Jewish community was as decimated as any in Europe — or more so. It is estimated that around ninety-six percent of Lithuanian Jewry perished, the highest proportion in all Holocaust-era Europe. Exceedingly few survived to bear witness. And for this alone Rasia’s story is an important addition to the literature of the Holocaust.

The story begins a few years before the war. Rasia describes the golden moments of her pre-war childhood. There were private schools and tutors; long, idyllic vacations in the countryside; friends and relatives in and out of her comfortable house. When news of the German invasion of Poland reaches Lithuania, Rasia responds by complaining that she didn’t see why their beach holiday needed to be cut short.

Rasia grows up fast. Her father is taken as soon as the Germans enter Vilna and she never sees him again. In short order, the family – which includes her mother and younger brother Leo – are forced into a ghetto and deprived of all their possessions other than a few pieces of clothing. Fortunately, Rasia’s mother sewed loose diamonds in the buttons and bars of gold in the waistbands of their clothing which they later “sold” for life-saving places to hide. What follows is a harrowing story of cat and mouse. Rasia and her family survive the ghetto by sneaking out to get food and safe places to stay. Rasia is helped by her “Aryan” looks and her talent for disguises and languages. At first it’s not easy for this city-bred educated Jewish woman to pretend to be a Lithuanian peasant. For a while she pretends to be a Polish worker, terrified that her accent will give her away to actual Poles working in Lithuania.

There is no shortage of the surreal. At one time, looking for a momentary haven, she drops in on a friend and finds herself at a party where she waltzes with a very polite German soldier. At another time she works at a German newspaper. The strain of living under such pressure is expressed elegantly. At one point Rasia wakes up because she hears someone calling.

This hardly surprises. To survive, Rasia is forced to live deep underground. She is forced to live on a knife’s edge of total reliance on the kindness of strangers and the justified suspicion that every interaction will lead to death. Lithuanians, Germans, Poles, old friends, new acquaintances – all are potential murderers. Helping a Jew can be lucrative. It can also lead to one’s own annihilation.

To save herself and help her mother and brother, Rasia must be ultra-careful and reckless, trusting and paranoid, open and profoundly closed. To survive for years in such a bifurcated state cannot and does not leave one unscarred. At liberation, the pressure is off but the everlasting damage has been done. 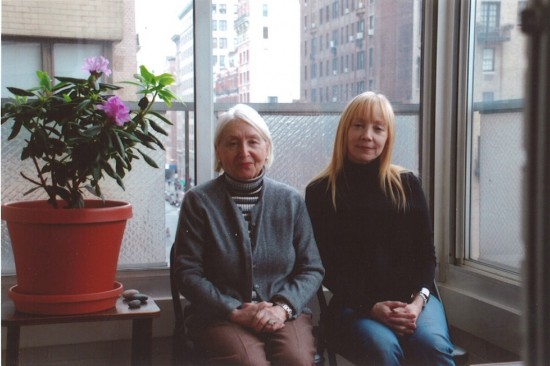 At this point most memoirs by Holocaust survivors end. The aftermath might be considered anti-climactic. Once the hairbreadth escapes, life or death decisions and fantastic coincidences (some would call miracles) in the daily life of the hunted Jew ends, there might be little interest in the story that follows. And this is where Waltzing with the Enemy differs from the other memoirs. It continues the story with Rasia’s daughter Helen. And though this part of the work lacks the high drama of Rasia’s escape from Lithuania, it tells a remarkable story of its own.

Using the documents of a Polish worker, Rasia gets herself deported to Austria as a guest worker as the war is coming to end. In Vienna, she falls in love with a Greek Orthodox man named Christos Mitsios and they immigrate to Montreal where the two surviving members of Rasia’s family live.

They have one child, Helen. And the second part of the book deals with Rasia’s decision not to tell Helen that she is Jewish. When they move to Phoenix, Helen is put in a Catholic school and is raised in the Greek Orthodox tradition. Helen has little idea of her Jewish heritage until she’s twelve, though, given that her mother and her family spoke Yiddish, what comes as a surprise is not that she is Jewish, but that she can choose to be Jewish. On a visit to Montreal to see her family, Rasia explains to Helen,

“You can be whatever you want. I wanted to wait until you were old enough to understand. The Jewish people have been a persecuted minority for over two thousand years and they’ll continue to be persecuted. Why should you be Jewish and suffer? I didn’t have a choice. You do.”

But like Rasia, Helen does not really have a choice. She’s Jewish by culture and then by inclination. She wants to be like her mother. And what excites her when she returns to Phoenix is that she too has a secret identity. But as Helen gets older, she begins to realize that her upbringing is neither typical nor conducive to mental health. The characteristic that allowed Rasia to survive the Nazis – extreme attention to detail, a heightened sense of danger – are not useful in raising an American child. Helen writes of her mother:

“… her protection manifested itself in a peculiar kind of negative motivation and warning system based on her clairvoyant understanding of the dire circumstances to come if I didn’t follow her advice.”

Her anxiety, her overbearingness, her fears are communicated to Helen in large and small ways. Helen suffers from claustrophobia, low self-esteem, and depression. She finds that she cannot have a satisfying emotional relationship with men. In short, Helen answers the question: Did the Holocaust nearly destroy two generations? Her answer is a definitive “Yes.” Only as she matures and has the good fortune to find insightful therapists does Helen escape the gravity of her mother’s fears. One psychologist tells her,

“The Holocaust is not your problem.”

It’s a harsh sentence, but one that finally alerts Helen to the possibilities of focusing on her life, not her grandfather’s murder.

This unique memoir is an important addition to the literature of the Holocaust and is an especially valuable document on the multi-generational effects of the Holocaust.

Ira Gold is a Professor of Languages and Literature and teaches Holocaust studies and literature at Touro College in New York City.