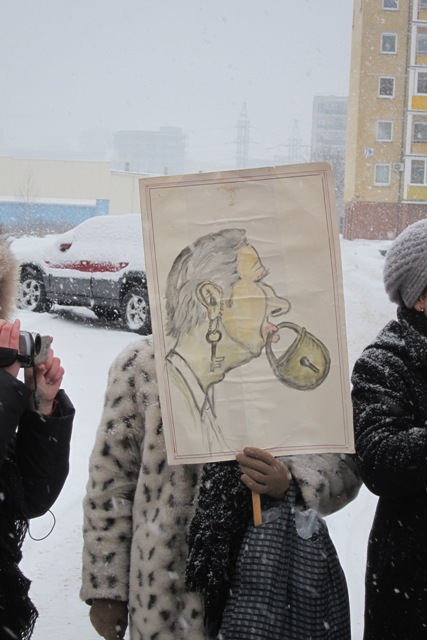 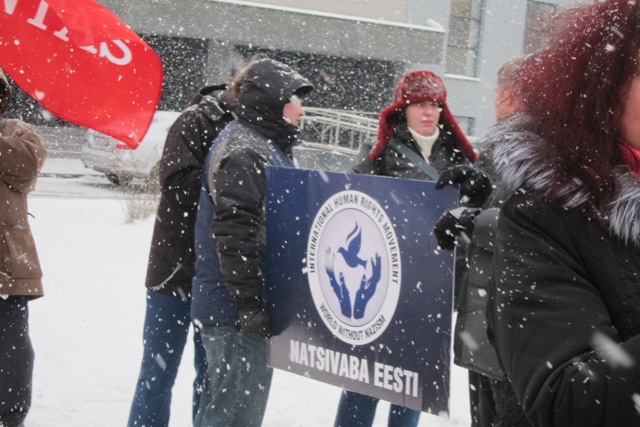 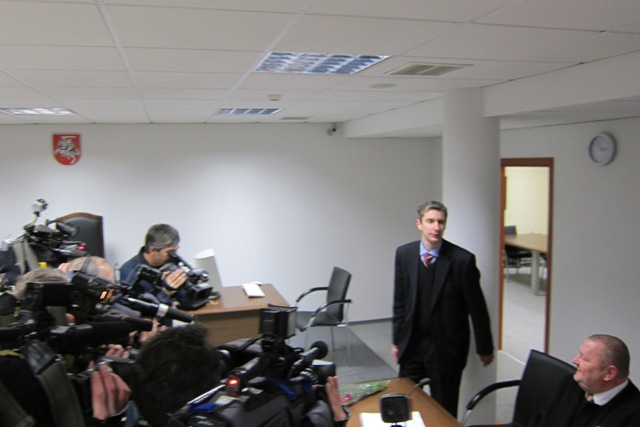 It was the third time this winter that the largely-the-same crowd had gathered at the municipal court on Lasivės Prospektas in Vilnius for the verdict in the sensational trial of maverick left-wing politician Algirdas Paleckis (earlier DefendingHistory.com reports and opinion here and here).

Once again, the crowd was rich in “friends and enemies” of the defendant. The apparent total absence of human rights and free speech advocates, NGOs, and observers from foreign embassies, was equally unsettling at all three hearings. Does free speech in the European Union, NATO and OSCE blocs not interest them?

This was after all a case about whether Mr. Paleckis should be punished for expressing his (yes, controversial and to many offensive) opinion on the tragic events of January 1991 when fourteen unarmed pro-independence Lithuanian peaceful protesters were murdered by Soviet forces in one of the USSR’s death-throes that year. Mr. Paleckis, who never denied that the demonstrators were unarmed or that the Soviet regime committed a crime by sending armed forces against them, contended that some of the shooting was done by local provocateurs from the nationalist camp, basing himself on others’ (yes, controversial) reports and research.

On the previous two occasions, on 14 and 30 December, the judge told the packed courtroom that his verdict had to be postponed because of a missing or faulty translation into Lithuanian of a Russian-language document produced by Mr. Paleckis. It seemed strange, given that the contents of the document were not in question. The impressionistic ambiance was one of a judge that did not know what to do, leading to the drawing out of a case that has caused much damage to the reputation of modern Lithuania where free speech on questions of history has been undermined by a 2010 law that could equally be used against those (such as myself and others here at DefendingHistory.com) who reject the notion of “Double Genocide” in Lithuanian and Baltic history and regard the genocide of the Nazis and their local partners as the one genocide here in the twentieth century. (Samples of my views on this here and here.)

[Full disclosure: I disagree fully with the gist and spirit of Mr. Paleckis’s analysis of events in 1991 (without having any specialist knowledge of details), but I admire his courage in being one of the few people in the country who speaks out loud-and-clear against the government’s policies of Holocaust Obfuscation, sanitization and glorification of the local 1941 murderers of Lithuanian Jewry, toleration of city-center neo-Nazi parades on national holidays, legalization of swastikas and more. My report on his three minute antidote to a November 2011 “tolerance conference” that excelled in cover-up platitudes and obfuscation of the issues appeared in New York’s Algemeiner Journal  (also: video and translation of Mr. Paleckis’s remarks).]

But this time the routine changed. As the 3 PM verdict proceeding got underway, the judge’s assistant asked, after ejecting reporters and those with large cameras, that all remain standing for the reading of the verdict. There would not be a third postponement of the verdict.

After a rapid-fire reading of a summary of both sides’ arguments, the judge reported that experts from Vilnius University’s Philological Faculty had concluded that there was nothing defamatory against any person in Mr. Paleckis’s remark that triggered the entire trial over a year ago. The remark translates roughly as: “Our own people were [also] shooting at our own people.”

19 JAN 2012: PROSECUTOR ANNOUNCES HE WILL APPEAL THE COURT’S DECISION

He duly noted that Article 19 of the United Nations’ Universal Declaration of Human Rights says clearly: “Everyone has the right to freedom of opinion and expression; this right includes freedom to hold opinions without interference and to seek, receive and impart information and ideas through any media and regardless of frontiers.” 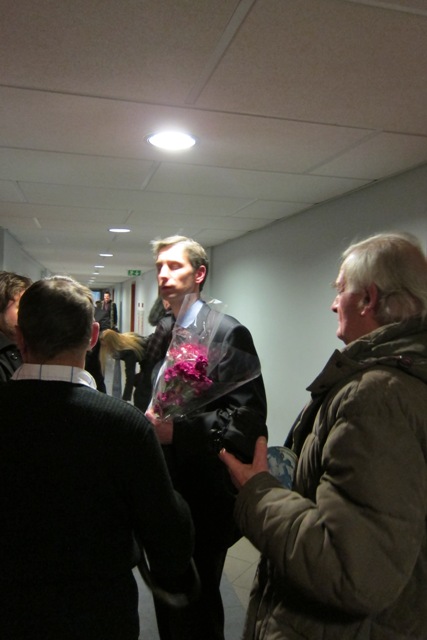 Emerging victorious from courtroom no. 013

If this sad diminution of Lithuania’s stature, wholly self-inflicted by prosecutors, possibly under the influence of government officials, is to be turned to benefit for the entire new-accession region within the European Union, then the lesson must be learned: the abominable 2010 law under which these kangaroo charges were brought in the first place should be repealed forthwith (see the eloquent analysis recently posted by Moacir P. de Sá Pereira).

Those pushing the law in the Seimas (parliament) made it abundantly clear that their purpose was to enable the legal equalization of Nazi and Soviet crimes (i.e. Double Genocide). It will go down as an irony of history that this verdict came on the eve of the first major European Parliament initiative against the 2008 Prague Declaration and the Double Genocide movement.

There was just one academic present. Asked why he did not bring any of his students to what would be an unforgettable lesson in civil society and the interface of the judiciary with the human right of free speech, he replied: “I tried hard, but they were all afraid that they would be photographed and that their presence at this trial would harm their future careers in Lithuania.”

But local human rights organizations, whose leaders presumably do not fear for their jobs should they come and support human rights instead of heading for the hills on days like this, might be inspired to somehow overcome their reticence and abject failure to even observe events that go right to the heart of their professional raison d’etre.

As for patriotism and loyalty: It is after all the true friend who says when something is wrong and needs to be put right.

All the more so in a democratic nation in the European Union, NATO and OSCE alliances.