Why Do They Do It in the Winter?

Posted on 26 January 2019 by Defending History

A wave of nationalism and hatred is rolling through Europe. In Gdańsk, Poland, mayor Paweł Adamowicz, who encouraged democracy and tolerance, was killed. From Hungary, where the ultra-right powers, namely Orbán’s Fidesz party and its ideological neighbor, third-in-size Jobbik, have taken power, come the news of the worsening conditions of Roma people. Eviction of Roma in Miskolc is but one example of segregation and discrimination (on Youtube).  Shocking footage from Bulgaria has also recently reached international Roma community (see on Facebook). The footage shows Roma houses being destroyed in the middle of the winter and the people resisting  being suppressed and beaten. Apparently, after a conflict between two Roma youths and local soldiers, the Bulgarian government decided to collectively punish the  Roma community by banishing them from the Voidinovo settlement by Plovdiv, which, by the way, is the European Capital of Culture 2019. The Bulgarian government is on a par with its Hungarian counterpart when it comes to discriminatory rhetoric and prejudice against the Roma.

Roma housing is being destroyed in Russia (see on Youtube) and Ukraine. Ukraine has been a hot spot of brutal assaults and pogroms against the Roma recently. During one pogrom in Lviv, 23-year-old Roma David Pap was murdered. The police arrested the suspects, but the group received no overall sanctions despite openly publishing video recordings of the “Gypsy Safari” as they called the pogroms (on Youtube).

Personally, I am always deeply shocked by such footage, as it seems to bring us back to  times which should never come back. I have seen sights similar to those from Russia and Bulgaria here  in Vilnius, Kirtimai, too (on Youtube). I cannot imagine anything more inhumane than taking away people’s homes in the middle of winter. I want to scream the question: Why do you do it in the winter?

It is hard to say which countries are now better or worse for Roma, as it seems that it is worsening everywhere where nationalist and conservative powers raise their heads. And they are rising everywhere, since the refugee crisis sparked fear in people, and where there is fear, there is darkness, and darkness is a perfect breeding ground for all sorts of populists and nationalists. Where there are nationalists, the repressive forces gain strength and Roma are persecuted.

Here in Vilnius, there  are only several houses left in the Roma settlement of Kirtimai. Demolition of the Roma settlement is nearing completion. Quietly, without much noise, the Roma have been successfully moved to social housing or left without nothing. The community is fragmented, scattered, and demoralized. The new “Law of Child Welfare”, passed in July 2018, enabled even further repressions against the Roma. A good law can become horrible in the hands of wicked people. At the moment, it is much easier to take the Roma children away from their families and it is much harder for them to come back, as poverty is now deemed as one of the conditions unsuitable for children, with its own threat levels assigned to it.

Another painful blow to Roma was the unfulfilled promise of the  leader of the ruling party Ramūnas Karbauskis, on the occasion of the state centenary and Pope Francis’ visit, to grant amnesty to women who are imprisoned for up to six years and are pregnant or have underage children. The amnesty would have improved the situation of many Roma families, but, although the Amnesty Law was passed, not one woman of Romani ethnicity was released from prison. To be more exact, around half of all imprisoned women in Lithuania are of Romani ethnicity, hence rights and conditions of imprisoned women as well as amnesty procedures are very important to the Roma community, especially when most imprisoned women are young or have underage children.

Yesterday I found out that my acquaintance Sveta, a Roma mother of five children, has not been set free by the so-called Amnesty Law. Her children have been taken to a child care home because her husband also has problems with the law and the grandmother is not allowed to take care of them “because of her criminal record”. Sveta’s family is actually an ordinary Roma family of Kirtimai. Her children have been taken to a child care home for the second time already. The first time was after a police raid in 2012. When I visited the children in the child care home during these hard times, the children’s only question was when they could go back home. It was very hard for them to adapt and they went through a lot of suffering. They returned to their family after a year and I saw how their mother tried her best to stay out of prison and how much their father did for them. Alas, the family went back to the vicious circle of poverty and social problems: unemployment, attempts to live on benefits, loans, credits, financial problems, and desperate attempts to survive pulled them back into unlawful activities. 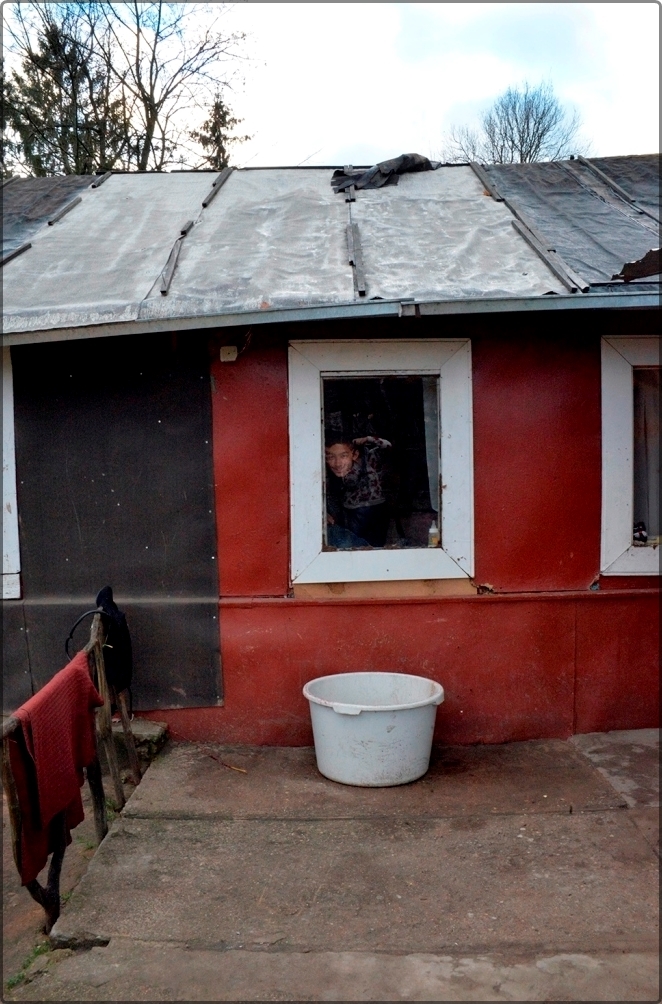 The house where Sveta’s family used to life, destroyed by authorities as part of a forced integration project.

I am not afraid to call it for what it is. People who have been  pushed to the outskirts of society are bound to give in when the only income in sight, right next to them, in their environment, is the way to be able to afford food and life’s minimum requirements. At this moment, their house has demolished by the authorities,  and they have been living in social housing for a while. No real changes except for the change of the place of residence have occurred, despite brave slogans and million-euro programs for “Roma integration”. What does this “Roma integration” mean?  Now, this Roma family is scattered among different institutions, the future of their social housing is unclear, as is unclear the overall fate of the family when essential, deep problems of poverty, deprivation, and unemployment are not even being addressed by the euro-millions for “Roma integration”. For many everyday Roma people, and indeed, for impartial observers, the most obvious part of “Roma integration” is the destruction of Roma people’s houses against their wishes and their forced removal to “social housing”. 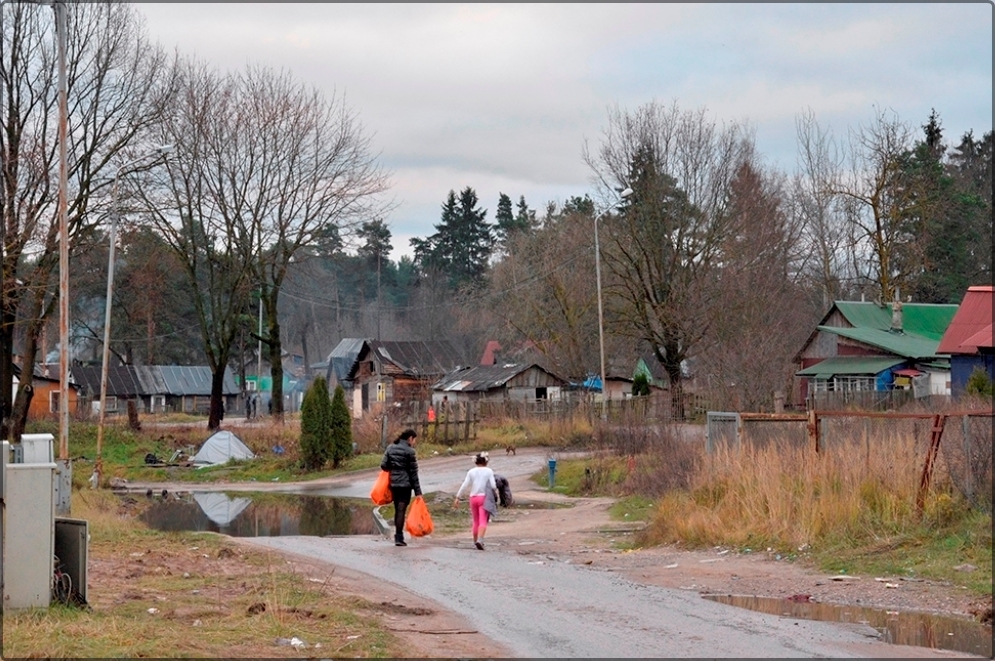 The Kirtimai Roma village before the “Roma integration programs” of 2016. Now there are only a few houses left standing.

Perhaps someone will consider their situation and come to some helpful decision. This is all beyond my comprehension: There are all sorts of meetings that keep being called  in all sorts of departments and offices, the process of counselling of how to properly implement the VILNIUS (KIRTIMAI) ROMA TABOR COMMUNITY SOCIAL INTEGRATION PROGRAM 2016-2019 has been underway for a while now, but I really do not believe in forced integration by means of the police (and there are many such means in the program). The very fact that the name of the program has the word “tabor” in it shows that people who prepared this program really have not studied Romani culture and have no understanding of the connotation of this word in this context.

Likewise, I see no plans to actualy help the Roma in the ROMA INTEGRATION TO LITHUANIAN SOCIETY 2015-2020 ACTION PLAN, either.

Therefore I fully agree with the Roma who speak louder and louder to the international community about how much the words of the powerful international organizations and state governments differ from their actions. Roma problems are but a smoke screen used to absorb foundations’ money and leave virtually nothing to the Roma themselves. There is plentiful  money for ever more research, conferences, congresses, reports, feasibility studies, websites and the like, but never for simple, minimal alleviation of Roma poverty.

And poverty is at the root of all the other problems.