The poster inevitably alludes to the Maidan, but as well as invoking the colors of Ukraine’s flag, it invokes those of the black and red flag of the more extreme Ukrainian nationalists. Surprisingly, for an organization keen on Christian ethics, it also includes a German submachinegun and bullets. But alongside that bellicose imagery lurk portraits of Yevhen Konovalets and, more sinisterly, Stepan Bandera and Roman Shukhevych.

Bandera’s role in World War II is infamous. Shukhevych is less well-known. He had joined the Nachtigall Battalion, which took part in the pogroms of Lvov (the former Lemberg, today Lviv in Ukraine) in 1941, before becoming a captain in the four-company strong 201st Schutzmannschaft Battalion. This was a volunteer Ukrainian auxiliary unit in German Police Battalion uniform and drawn from Ukrainian nationalists.

This unit was sent into Belarus in early 1942 and tasked with the liquidation of partisans and Jews and the rounding up of anyone helping those groups or resisting German rule. In 1943 most of the personnel transferred into the Ukrainian units of the Waffen SS, although Shukhevych parted ways with the Germans and elected to raise an army of UPA insurgents in Ukraine. The UPA went on to wage a brutal campaign of ethnic cleansing against Poles in Volhynia, most of whom were women and children, and against any Ukrainian who protested. His switch from an active role in genocide, to a leading role in ethnic cleansing, marks him out as a violent perpetrator of horrendous crimes. [1]

event in Derbyshire celebrated such Ukrainian wartime leaders, the poster reflected their position in a new Ukrainian pantheon of heroes. Their role in supporting the Nazis is perhaps news to the people of Derbyshire. But there is a little clue to anyone looking at the poster. Just under Bandera’s portrait, where his black tie touches the corner of the image, there is a small-size swastika.

The families or relatives of those who died in the Holocaust, or of Poles killed in the massacres of 1943 and 1944, would be hurt by this commemoration. The people of Derbyshire, and of Britain, should be shocked by this poster. 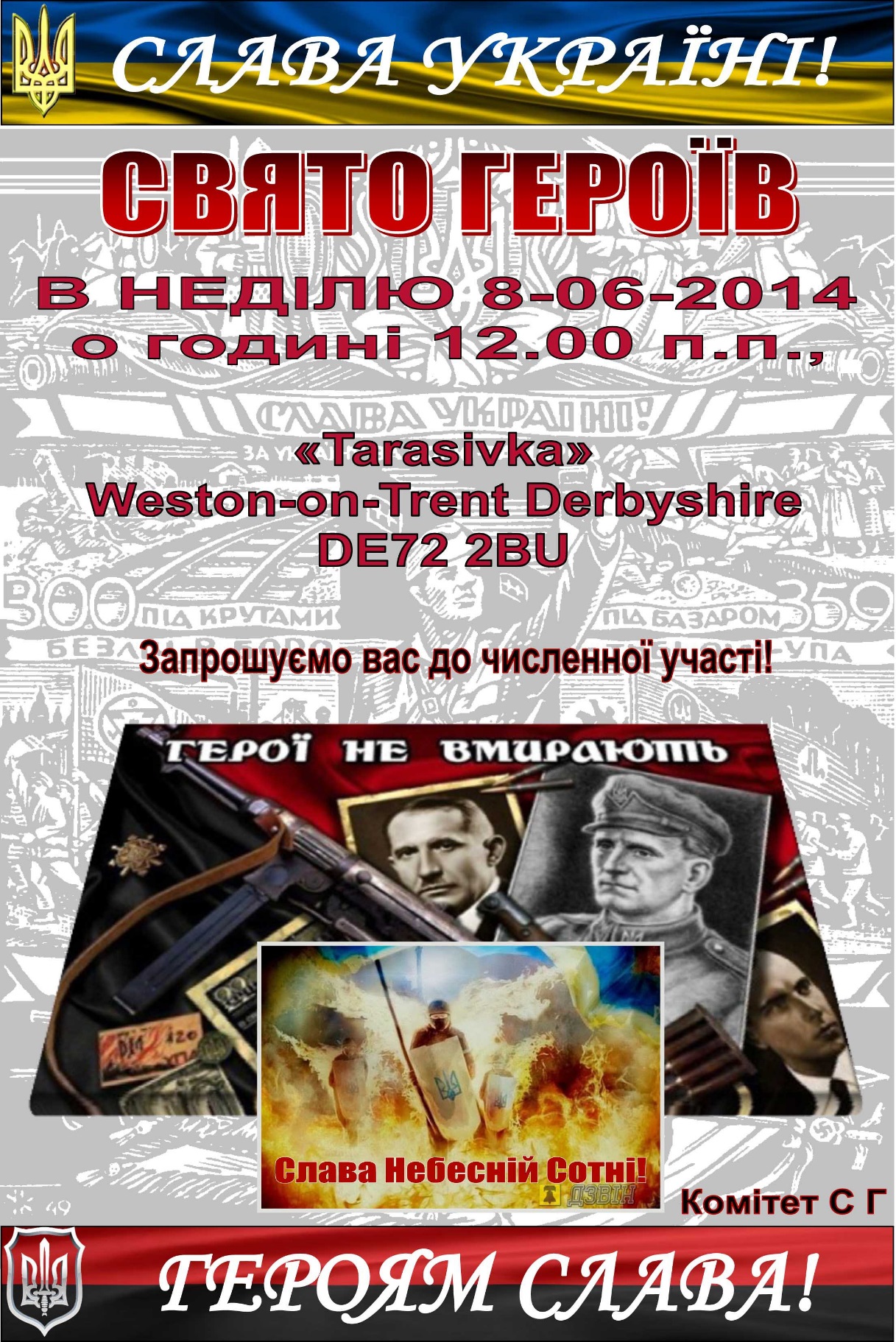 [1] His son, Yuri, currently serves in the Ukrainian parliament and is author of the law (2538-1, On the Legal Status and Honoring of the Memory of the Fighters for the Independence of Ukraine in the 20th Century) designed to honor the memory of fighters for Ukrainian independence, including the UPA, OUN and anti-Semitic ABN, and awarding social benefits to insurgency veterans.