A Tale of Two Tweets (Or of Two Conniving Bedfellows: CPJCE and “Admas Kodesh”)…

Posted on 7 August 2015 by Defending History


BROOKLYN, N.Y.—Followers of the Jewish cemetery saga in Vilnius were shocked at the most recent “game playing” by a haredi splinter group allied with Admas Kodesh (“Holy Earth”) and the CPJCE (the London based “Committee for the Protection of Jewish Cemeteries in Europe”) that was last April entertained by the prime minister of Lithuania and gave its blessing for a $25,000,000 convention center in the heart of the old Piramónt (Šnipiškes) Jewish cemetery that goes back to the fifteenth century, if not earlier. The group has been implicated by Wikileaks’ release of a 2009 U.S. ambassador’s cable explaining that their quiet permissions for digging and “beautification” comes with big price tags.

The primary Satmar Rabbinical Court and its Rebbe release a declaration condemning the convention center project on the cemetery, in full conformity with the unanimous decisions by Lithuanian rabbis in America and Israel.

Put differently, associates of a (splinter) hasidic group (the Satmar “Aaronites”), with zero connections to Lithuania turned up in Vilnius, allegedly negotiating payments for allowing/supervising works on the old cemetery (including “exploratory digging” that is strictly forbidden by Jewish law), without so much as informing any of Vilnius’s three rabbis that the meetings were taking place. The plans for the new convention center have since been condemned by the top Lithuanian-tradition (Litvak/Litvish) rabbis in the United States, and in Israel, by descendants of the Gaon of Vilna at the synagogue that bears his name in Tel Aviv, by Lithuania’s chief rabbi and by the resident rabbinic Vilna Gaon scholar. There has been much wider international opposition to the project. In addition there have been passionate voices from within Vilnius, including an elderly Vilna born Holocaust survivor, a younger Orthodox member of the community, a Jewish professor of architecture, a Protestant pastor, and an urban planner, among others.

The tale of the tweets is stark. As efforts were being made to collect signatures from all twelve of the top Lithuanian-tradition (Litvak/Litvish) heads of yeshivas in the United States, Admas Kodesh on 22 July tweeted: “Don’t fall into the trap” urging them not to sign. But then, when the proclamation (Yiddish kol-koyre, Hebrew kol korey) appeared in Hamodia on 30 July, the same group then tweeted, incredibly, “Thanks to the great Lithuanian roshey yeshivas [heads of yeshiva] who are supporting @AdmasKodesh holy work to save the Vilna cemetery.” And this comes from the group that supports a $25,000,000 convention and congress center in the heart of the old cemetery where people will clap, cheer, drink in bars and use the toilets surrounded by thousands of graves below. The most recent architects’ meetings have expanded the plans to include a circus. The two tweets: 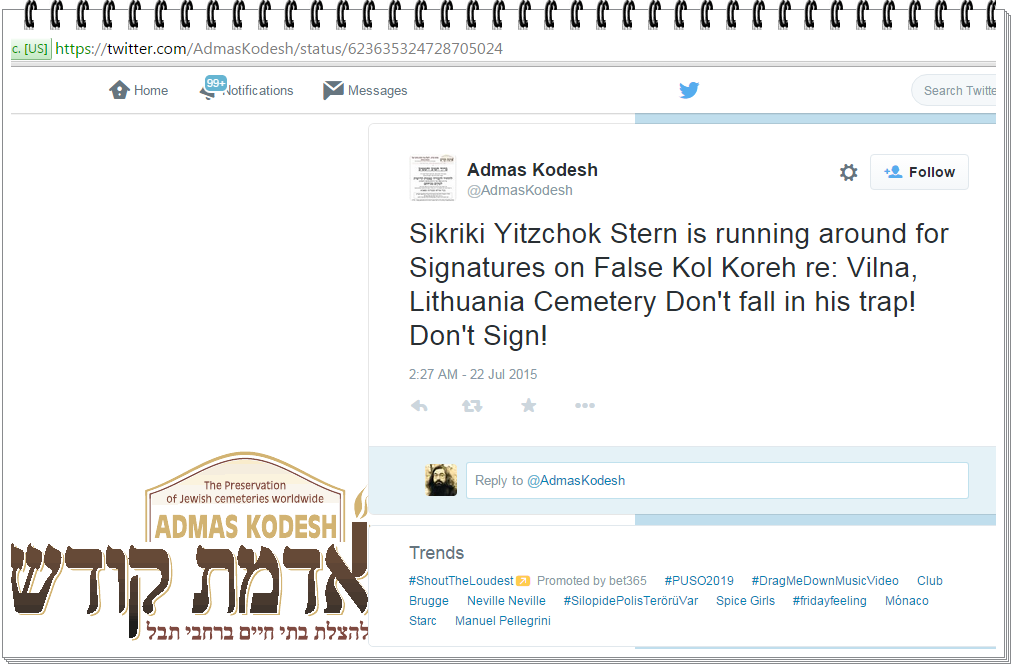 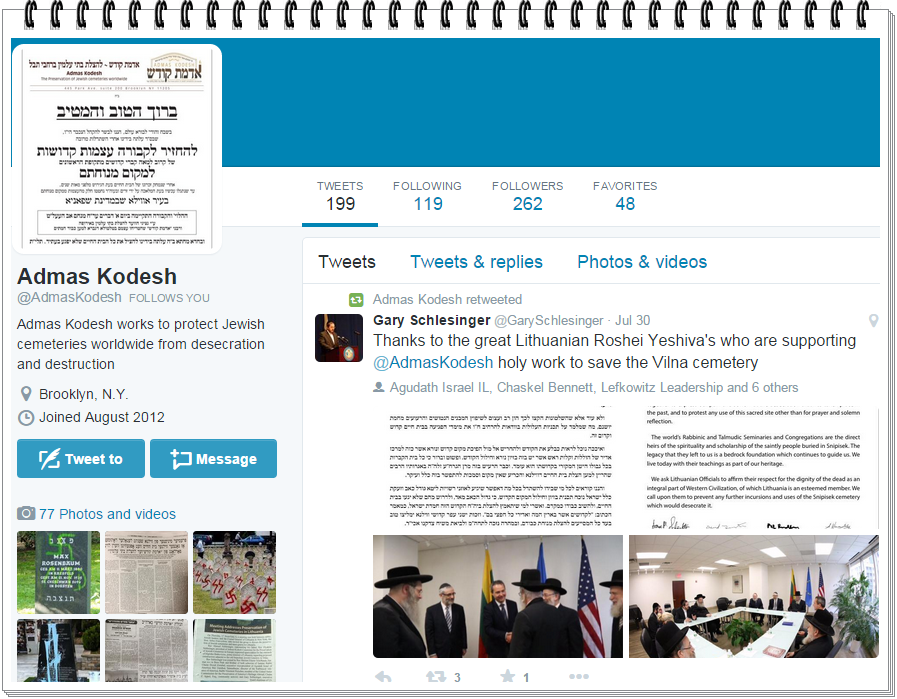