Posted on 6 August 2015 by Defending History 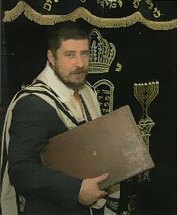 VILNIUS—Flying today from Vilnius airport on a routine commute to Israel, the chief rabbi of Lithuania, Rabbi Chaim Burshtein, who has held the post for over a decade, experienced what he felt was effectively “an attempt at deportation” during the routine passport control check for passengers traveling to non-Schengen countries. He was threatened by the official, who explained he would no longer be free to enter Lithuania, an EU and NATO member state. Rabbi Burshtein explained to the official, quoting the prophet Jeremiah, that he has always followed the Jewish law of obeying the laws of the state in which one lives.

In his Facebook report of the incident (in Russian), Rabbi Burshtein reported that “the frightened passport control employee said that he was just doing his job” and there were “reasons for the decision.”

Rabbi Burshtein, who has never had any issues with the state or its laws since his appointment in March 2004, goes on in the Facebook post to speculate on the reasons for this latest and wholly unexpected development.

“The only reason for this attempt to deport me that I can discern is the rabbinic opposition, and that of many of the Jews in the country, to the destruction of the old Jewish cemetery in Vilnius for the construction of a congress and convention center complex” in the heart of the site.

Plans for the $25,000,000 convention center, widely condemned internationally, have become part of a complicated, and some say incredible international saga that has yet to be resolved. It has produced a substantial paper trail in recent months.