According to historians, the largest slaughter of people in a single day in the history of the Baltic states occurred on the 29th of October 1941, when between nine and ten thousand Jews were gruesomely killed at the ‘Ninth Fort’ near Kaunas (Kovno), Lithuania, under Nazi German command. Highly motivated local forces carried out most of the killing and the associated humiliation and degradation of the victims. To mark the occasion there is a commemoration ceremony at the site held each year at midday on the last Sunday in October. This year it was held today, under a bright sun that warmed the clear chill of late fall in Lithuania.

The mayor of Kaunas, Andrius Kupčinskas, spoke eloquently about the need for his city’s people to understand the role played by Jews, Poles, Russians and others in the rise of modern Kaunas—formerly Kovno (Yiddish Kóvne)—over many centuries. Simon Davidovich (Simonas Dovidavičius), director of the Sugihara Museum in Kaunas, and Rachel Kostanian, director of the Green House in Vilnius, and her assistant, Austrian volunteer Sebastian Pammer, were among the first to arrive and to help visitors with questions about the Holocaust in Lithuania, and at the Ninth Fort in particular.  The Vilnius Jewish community was represented by Tobias Jafetas, head of the  Union of Former Ghetto and Concentration Camp Prisoners in Lithuania.

Julia Menciuniene, veteran director of the site’s small Holocaust museum,  which she has run for about half a century, approached visitors with extraordinary warmth and hospitality, asking people to come for tea and snacks at the event’s conclusion, and asking their advice on how exhibits and facilities might best develop in the years to come.

One foreign diplomat was in attendance. Renowned human rights champion Steinar Gil, ambassador of the Kingdom of Norway, brought flowers and gave a brief and moving tribute to the victims. He then joined a group who followed tradition and walked around the site’s perimeter at the ceremony’s conclusion. Some diplomats were not even aware of the event, pointing to a need for enhanced administration in years to come. 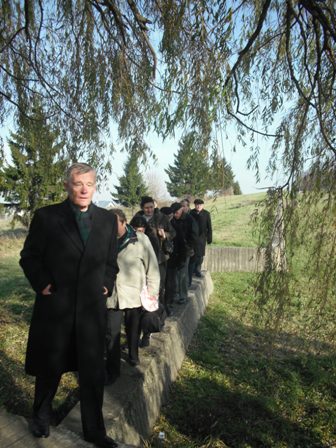 Not a single representative of the Lithuanian government in Vilnius came for the event. Nor was there anyone from among the various Holocaust specialists and academics vying for grants and positions from Western organizations that support Holocaust studies in Lithuania.

For most participants questioned, the highlight of the day was the talk delivered by Michael Maass, national director for Lithuania of the International Christian Embassy Jerusalem (ICEJ). It was translated by his wife Fausta, national co-director. The entire text of the address was provided to HITB by ICEJ (read here). 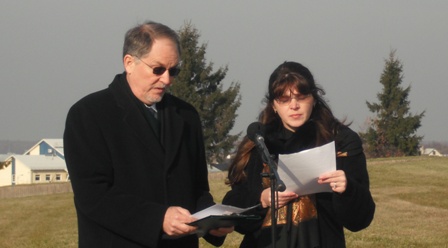 “I say to the Christians of Lithuania, please say to the Jewish people the following:  ‘It was not only the Germans who hunted you down and killed your families. Some of our forefathers  did as well. Some of us took your clothing and moved into your homes. And many of us were silent and did nothing to help you. We are guilty as well as the Germans. We deeply regret what some of our brothers did to you. Please forgive us. And I say these things to you, the Jewish people, today.’

“Second, there must be honest and accurate Holocaust education in the schools and churches. To the Christians I say that we must teach our children what really happened, and teach them to love the Jewish people, the ones who gave us our concept of the one true God, gave us our Bible, the prophets, apostles, even Jesus Himself was a Jew. I have seen how some choose to forget, or minimize what happened. Someone said that not remembering the Holocaust means to side with the executioners against their victims: not to remember means to kill the victims a second time. On the other hand, to remember means to feel compassion for the victims of all persecutions.”

—Michael Maass, National Director for Lithuania of the International Christian Embassy Jerusalem. From his address at the Ninth Fort Holocaust Commemoration, 31 October 2010.

Following a pattern increasingly common in the region, the Ninth Fort has a small but powerful Holocaust museum as well as a separate, much more modern, larger and higher-tech museum dedicated to both Nazi and Soviet crimes, with the majority of space and emphasis going to Soviet crimes, and the identity of the murderers of the Holocaust being obfuscated as far as possible. The larger, modern museum is called The Museum of the Kaunas Ninth Fort. 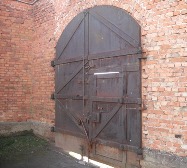 ‘The Gate of Death’

The small and simple Holocaust museum is located in actual historic premises of the Ninth Fort, built by the czarist government in the early 20th century. Many of the thirty thousand Jewish victims of the Holocaust killed at the site passed through it, rapidly being processed through  the ‘Gate of Death’  leading directly to the shooting ground beyond. The actual prison barracks were used mostly for French and other foreign Jews who were shipped here for murder by units considered by the Nazis to be among the most effective in Europe for murder of Jewish civilians.

Visitors considered it unfortunate that the room (located in an actual former prison chamber) dedicated to ‘Slaughter of the Jews, 1941-1944’ has been closed for renovations for two years. Rumors have been circulating in Holocaust studies circles about possible plans to ‘widen the scope’ to include ‘a number of genocides’.

The imposing outdoor memorial sculpture by  A. Ambraziunas, erected  in 1984, is one of the country’s best known memorials to victims of the Lithuanian Holocaust. It stands 105 feet (32 m) high. 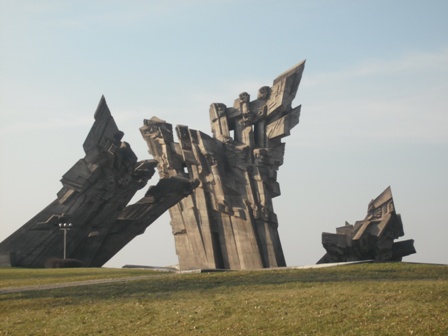