Posted on 19 September 2022 by Defending History 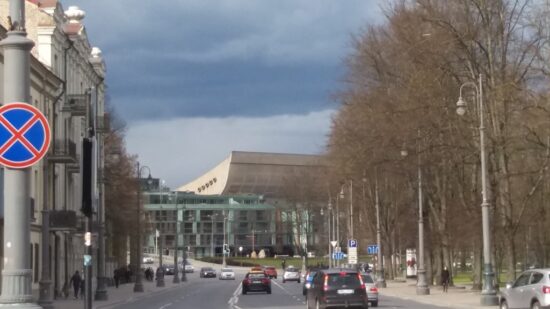 Look what you can see standing right by Vilnius’s Cathedral Square: The Soviet “Sports Palace” ruin that symbolizes not only antisemitism but also: Soviet/Russian Empire spiritual and political domination of Lithuania’s free spirit. High time to be rid of this carbuncle on the beautiful face of modern Vilnius?

The first phase of the eradication of the Old Vilna Jewish Cemetery at Piramónt in Shnípishok — modern Šnipiškės — and of the people buried there, started back in 1830, contemporaneous with an uprising against the Russian Empire. The November Uprising, as it is now known, started with the will to resist the czarist government’s plans to send the army of Poland — at the time an autonomous kingdom within the Russian Empire — to Belgium and France, as well as with the dreams of restoring Polish independence. In 1831, seeing that the uprising for independence would soon take over Vilna, the Russian Imperial government expropriated a section  of the Jewish cemetery by the bank of the Viliya (now Neris), and established an artillery citadel to keep the freedom-loving city at all times in the crosshairs of its cannon barrels. But even after the establishment of the citadel, more than three quarters of the actual graves (and their stoness or mini-mausoleums, oyhólim) remained untouched. This legendary cemetery is a Litvak pantheon, a monument to the civilization of Lithuanian Jewry. So it is meaningful that its first phase of destruction got underway just as the Russian imperial government’s project to enhance its military presence in Vilna, by making sure that the city’s inhabitants live in constant fear. 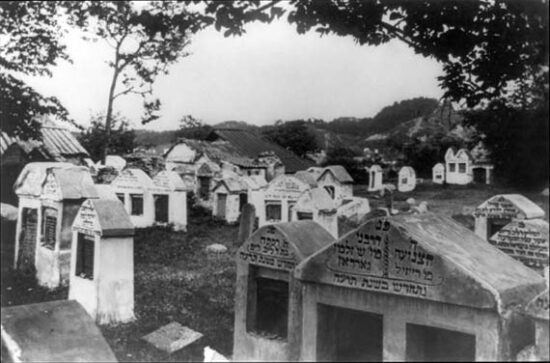 A small section of the Old Vilna Jewish Cemetery at Piramónt. The Soviet Sport Palace was built in its heart. All stones and inscriptions were trashed but thousands of graves survive on all four sides of the building, now an eyesore in the heart of modern Vilnius.

Fast forward to the the 1960s. There was a Soviet plan to build a Palace of Concerts and Sports in Vilnius. Usually, such objects for mass events are built somewhere in the suburbs near a very wide street or other thoroughfare. In Vilnius, however, the chosen spot was the Old Jewish Cemetery in Šnipiškės. Just as in 1831, the  venue chosen for the Palace of Concerts and Sports was not motivated by urban design concerns but by politics. In the mid 1960s, Lithuanian Jews’ efforts to execute the right to emigrate became an expression of resistance against the Soviet-Russian regime in Lithuania. The empire (in its contemporary incarnation) responded to “its” Jews by starting this major construction on the Old Jewish Cemetery and completely eradicating the legendary Litvak pantheon with its thousands of meticulously beautiful transcriptions in the ancient Hebrew lettering. All of the stones and mini mausoleums were removed from the entire cemetery and junked like rubbish, not just from the building site for the Sports Palace itself, of course (a sports palace wouldn’t look right with Jewish stones on all four sides, which would in any case obstruct the throngs of fans. At the same time, the Soviet authorities were sending a very clear warning signal to non-Jewish citizens of the country: forget any dreams about personal rights and freedoms, forget your country’s history and your particular heritage, and forget about dreams of migration too. 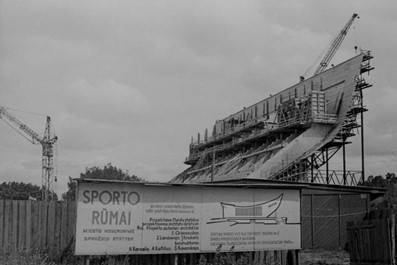 The construction of the Palace began in 1965 and took a long time, more than six years. Many people and institutions took part in the effort. However, if we flip through the news articles about the construction at the time it took place, we would not find even a hint about human remains unearthed and crushed by heavy construction machinery, as if these were completely insignificant events, not even worthy of the tiniest mention in one of these articles. As more and more locals were being involved in the eradication of Jewish remains, anti-Jewish sentiments and apathy to civilization more generally would be spread in the general public. The twentieth century destruction of all the visible (above-ground) pantheon of names, dates, stories, going back half a millennium by the Soviet authorities remains neither discussed nor studied by scholars in modern Lithuania.

When you climb the city’s pride, Gediminas Hill, and look northward, you see a city panorama dominated by the shining Palace of Concerts and Sports. In 1965, Moscow invested heavily in establishing this new symbol for Vilnius, an alternative to the Gediminas’s Tower atop the hill that bears his, the early fourteenth century founder of Vilnius’s name, a symbol that would overshadow the Cathedral and the Ostrobrama (Aušros vartai, Gates of Dawn), and would tower over the monumental baroque churches. Of course, there is no Stalinist décor on the façade of the Palace. By the 1960s, totalitarianism and expansionism had already found more abstracted forms of expression. The façade of the Palace is curved — as if to depict a ship or a wave that rises against the Hill of Gediminas.

The artillery citadel of 1831 and the palace of 1965 send the same message to Vilnius and the world—that of the never-ending expansion of the Russian Empire. The Palace of Concerts and Sports’ huge building is situated in a way that lets it be seen from the most important spot of the city: Gedimino, or Gediminas Avenue, when you cross right in front of the Cathedral. Yes, the Vilnius Palace of Concerts and Sports is the cathedral  of the Russian Empire’s Soviet period and  of its then Soviet Lithuanian constituent republic by force. Just look at how the seven centuries of Vilnius were artistically depicted in the spirit of the Soviet period. 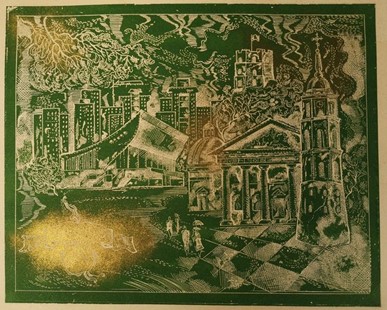 Official Soviet Communist Party picture commemorating the 650th anniversary of Vilnius (c. 1973). The Sports Palace built in the middle of the Old Vilna Jewish Cemetery appearing as the conceptual center of the image may symbolize antisemitism and Soviet-Russian imperial domination in equal measure.

Similar buildings were built all over the Soviet Russian Empire, in every significant city, from Frunze (now Bishkek) to Riga, from Cheboksary to Vilnius. These edifices differ rather slightly in their façades, constructions, and names, but the general appearance and scale, the concept and the function, all remain the same: to entrench the imperial power of expansion and of control over us little tiny humans.

To enlist this monument of an aggressive empire’s spiritual enslavement into the book of Lithuanian cultural heritage was a mistake, an aberration, an affront to humanity’s horizons. We must look for this act’s reasons in ourselves. Instead of sending it where it belongs, to use the opening-salvo cry of the courageous and freedom-loving Ukrainian fighters, we are now told yet again, in late 2022,  to spend heaps of our hard earned taxpayer euros to reconstruct this palace, abandoned here by the evil empire. What other disasters must befall us before we finally understand that, by harming “our” Jews and what is left of their legacy, a legacy as old as Vilnius (Vílne in Yiddish), we are, most of all, harming Lithuania and ourselves?

A version of this article appeared in Lithuanian in  7 meno dienos (7md) and is now available online.  The title in Lithuanian is “Once again about the Vilna Jewish Cemetery in Šnipiškės” and comes from the editor, referring to my previous 7md article on the subject, published on 9 February 2020 (and reissued two days later by LRT).

Since the first article in early 2020, the situation around the Jewish cemetery has changed. After long protest actions, including an international petition initiated by a Vilnius native and a resolute campaign by DefendingHistory.com, the Lithuanian government announced in August 2021 it was indefinitely suspending the project to convert the Soviet eyesore into a new national convention center. However,  instead of dropping altogether the idea to revive the Soviet monstrosity which needs to come down for the sake of all the people of Lithuania, and symbolically of the free world, our Lithuanian government has run into another blighted and misguided idea of making there a new Jewish museum, emulating  the Jewish “Polin” museum in Warsaw, Poland (despite near universal rabbinic opposition on the grounds that: A cemetery is a cemetery is a cemetery). It is an insincere ruse in a small country where it would, be the sixth Jewish museum project on top of the five museums (or museum projects) now extant: (1) Ponary Memorial, (2) Museum of Culture and Identity of Lithuanian Jews (3) Memorial Museum of Holocaust in Lithuanian and Vilna Ghetto, (4), Lost Shtetl Museum, and the most recent museum project (5) Vilner Shul.

The real aim is to find yet another ruse, no matter how cynical, to save the dilapidated Soviet symbol of brutalist architecture and brutal politics from being knocked down, as it should have been knocked down long ago like all the other offensive Soviet monuments, and to start spending millions of taxpayers’ money to “make the building safe” in reality saving it for future revival of a convention center or other shameful commercial project surrounded by thousands of extant graves (the underground kind) an all four sides. As we say in Lithuania, “Sew a coat to the button.” The monstrous building is wrongfully on the list of Lithuania’s cultural heritage and as such is under state protection. Therefore the aim of this article is to initiate  a discussion about its long overdue removal from that register of culturally protected archicectural objects, a register that needs to be rooted in honesty, transparency, and simple decency. 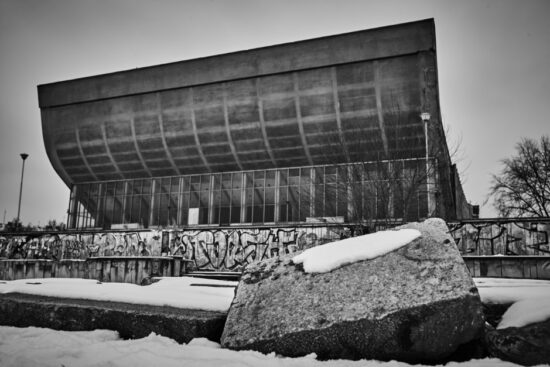 The Russian Empire / Soviet Empire spirited dump that is a carbuncle on the face of modern Vilnius. Its demolition and restoration of the magnificent Jewish cemetery with thousands of inscriptions will draw love and tourism for generations to come. Photo by Bartosz Frątczak (2020).