What is the “Program for Roma Integration” in Lithuania?

Posted on 20 November 2014 by Defending History

Here in Lithuania, the words “Roma” and “discrimination” are regarded as inseparable. It seems that even the Roma community is reconciled with that. The situation, however, is worsening and what is currently happening in Kirtimai, a village on the outskirts of Vilnius, the capital city’s home to its most prominent tabor, or Roma settlement, and often referred to just as Kirtimai Tabor. What is happening is something larger than just “discrimination against Roma.”

For starters, the water has been disconnected in upper Kirtimai. There had never been a proper water supply but there was a water “column” used by some three hundred people. But it has been blocked off. Looking at the sight of baby carriages used for carrying urns of water is a sight unbelievable for the beautiful capital city of a European Union member state.

In February 2012, the freeze on the water supply came to upper Kirtimai after a hepatitis A epidemic began to break out. Then the mass media trumpeted: “The Roma community is spreading the disease by their dirty hands.” A quarantine followed. Roma were not allowed to visit hospitals and children banned from orphanages. At school, Roma children felt like lepers because of the fear of the other children. 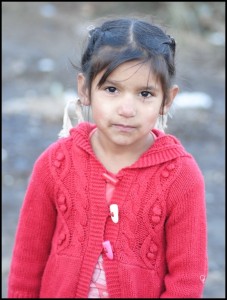 In early 2012 Vilnius mayor Artūras Zuokas promised: “… We will make sure such places as this encampment in Vilnius will vanish from the map.” So it is not surprising that not only water disappeared, but also the electricity connection was severed and housing was burned down. It was publicly announced that the city municipality would carry out integration of the Roma people and enforce a rapid eviction from their tabor.

The people were not evicted to somewhere. They were rather simply thrown into the street. At best, become homeless families were put into the social housing queue, where they will have to wait for ten years or more. At a time when the mayor announced that the Roma must comply with the laws and procedures acceptable to all, the ruins of the encampment sites and of Parubanka began to spring up primitive tents, where some Roma families found shelter from the elements.

As if that is not enough, the encampment is continually the target of police raids. Witnesses report that daily searches, conducted under the pretext of “prevention,” are resulting in dwelling structures, such as they are, being reduced to scrap, and residents, including children, being terrorized by the oft-repeated spectacle.

It is certainly the case that there is a drug problem in the encampment, but it is not a mass phenomenon. Nor can it remotely be in the public interest to oust an ethnic minority from its only home camp, and then from populated areas generally. In fact, international law considers the infliction of conditions upon a group calculated to bring about its physical destruction, in whole or in part, as a form of genocide.

At this writing, the campaign of harassment has still not resulted in people dying, but with each passing day there is the risk of people developing serious diseases when they are left without clean running water and in some cases without a home. With constantly disrupted power supplies. With no refuse collection services. The idea of enabling the community to achieve progress is not even on the table.

Of course, municipal bigwigs can find hundreds of ways to justify the behavior, not least by repeating, exacerbating and disseminating countless baseless prejudices against the Roma. But the actual behavior, and the social policies, are calculated to destroy the community at Kirtimai Tabor.

Vilma Fiokla Kiurė is the recipient of a Prophet Amos Award for Human Rights in Lithuania for 2014-2015. She is also active in human rights activities countering racism and antisemitism, and takes a leading role opposing the annual neo-Nazi marches enabled by authorities in the heart of the nation’s capital.