Officials of US Taxpayer-Funded “USCPAHA” in Vilnius (with State Dept. Reps) for Grand Photo-Ops

(More for good measure. And more and more…)

The deeply controversial “US Commission for the Preservation of America’s Heritage Abroad” has for years allegedly been collaborating with government, business and a dubious group of “grave trading rabbis” in London, seemingly determined to humiliate Lithuania’s oldest Jewish cemetery by construction of a national convention center at its heart. This would not be happening were it a Christian Lithuanian cemetery. Massive international opposition is growing. History of the saga. Summary.

But did the American government’s commission officials (or their State Department colleagues in tow) bother while here to even meet with Ruta Bloshtein, author of the international petition calling on the Lithuanian government to move the national convention center project away from the sacred old Vilnius Jewish Cemetery? Her office, in the Judaica section of the national library, is a few minutes’ walk from their gov. meetings. Ms. Bloshtein’s petition has 53,500 signatures to date. There are numerous reports on the recent history of the US taxpayer-funded commission’s role in the affair. Meanwhile, international opposition to desecration of the old Jewish cemetery grows apace.

The issue is also relevant to the painful ongoing Holocaust issues, on the eve of the 80th anniversary of the onset of the Baltic Holocaust on 23 June 1941, which the state celebrates as a “heroic revolt.” Did the visiting Americans (including the US State Department’s “Special Envoy for Holocaust Issues in the Bureau of European and Eurasian Affairs”) bother to visit the Vilnius street named for glorification of the events of June 23rd 1941? Did they politely bring up the pain caused by the Lithuanian parliament’s decision to name 2021 for a brutal Holocaust perpetrator? Or by its decision to appoint as director of the Genocide Center a far-right spokesman who gives speeches posing with posters of major Holocaust collaborators? The Defense Ministry’s continuing online adulation of a major theoretician of the ethnic cleansing of Lithuania of its Jewish citizens?

The issue of dignity of Lithuania’s oldest and largest Jewish cemetery is closely linked to Holocaust history. It is because of the genocide that the tens of thousands buried in peace over half a millennium do not now have a minimal critical mass of living descendants in town to stand up for the cemetery’s dignity (the current court case’s 157 plaintiffs are residents of Israel and the United States). And on that note, did the photo-op inclined visitors bother to meet with those who have just submitted an appeal to the recent court decision on the cemetery? 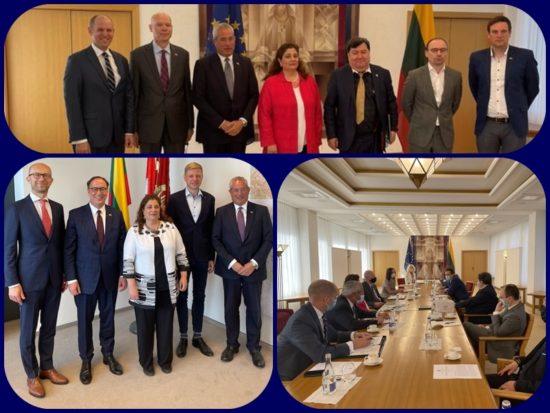