On Prof. Fryshman’s initiative, the International Religious Freedom Act was in 2014 amended by the United States Congress to include assaults against cemeteries of minorities anywhere in the world.

The plans to allow a convention center in the heart of Vilna’s old Jewish cemetery, known as Piramónt, situated in today’s Šnipiškės district, have drawn shock and condemnation from rabbinic and secular Jewish, and other, leaders around the world, including Vilna’s oldest native-born Holocaust survivor, a Latvian-American journalist, a Vilnius kosher-food supervisor, among those locally who have joined virtually all the top Litvak (Lithuanian-origin/tradition) rabbinic leaders internationally in asking for the convention center to be relocated.The world’s top scholar of the Vilna cemetery’s history, Prof. Sidney Leiman, has explained Jewish law and lore as well as providing detailed reconstructions of the major inscriptions that could be used in a good-well restoration of the grounds as a permanent cemetery cum memorial ground for the Jews of the city once known as “Jerusalem of Lithuania.” Vilnius’s long term privately based Litvak rabbi, Rabbi S.J. Feffer, was one of the first last year to issue a rabbinic edict against disturbing the old cemetery, and was quoted by JTA.

“Most shocking is a statement signed by Rabbi Yeshaya Schlesinger and Rabbi Abraham Ginsberg of the CPJCE that […] the CPJCE approves and endorses the ‘Vilnius Palace of Concerts and Sports conversion to Congress Center 2016 Plan B’ and wish this venture every success.” — Dr. Bernard Fryshman (July 2016)

“We will persist in trying to stop this project. But if [Heaven forbid] it carries through, there is ample shame and lots of blame to be shared.” — Dr. Bernard Fryshman (July 2016)

Professor Fryshman’s new article appeared in today’s edition of Yated Ne’eman, and is available photomechanically, below, and in PDF format. It follows an earlier piece he contributed last year. 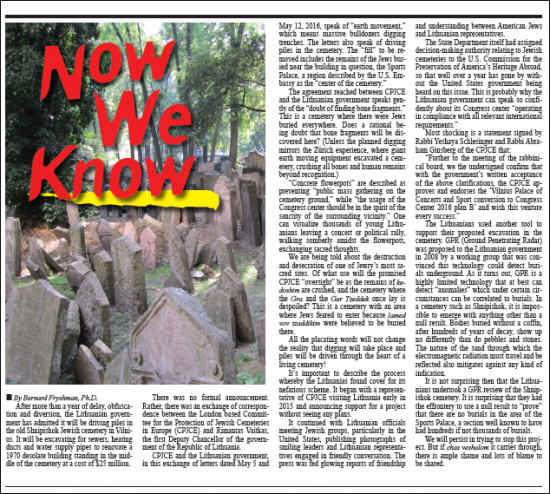