Earlier today, I had the honor to be one of three individuals from very different backgrounds who partnered to visit with the highest city authorities we could reach to plead for the Old Vilna Jewish Cemetery. In the current situation, that means, pleading with authorities to move the national convention center projects away from the thousands of Jewish graves going back to the fifteenth century, so as to enable this amazing site in modern Vilnius to be restored to the city’s great benefit and reputation.

The meeting was initiated by Ruta Bloshtein, author of the international petition asking the Lithuanian government to move the convention center project (it has achieved around 44,000 signatures to date). The third participant was Rabbi Samuel Jacob Feffer, a major scholar of the Gaon of Vilna, who has been based in Vilnius for over a quarter of a century. He is co-editor of dozens of books of the works of the Gaon of Vilna. 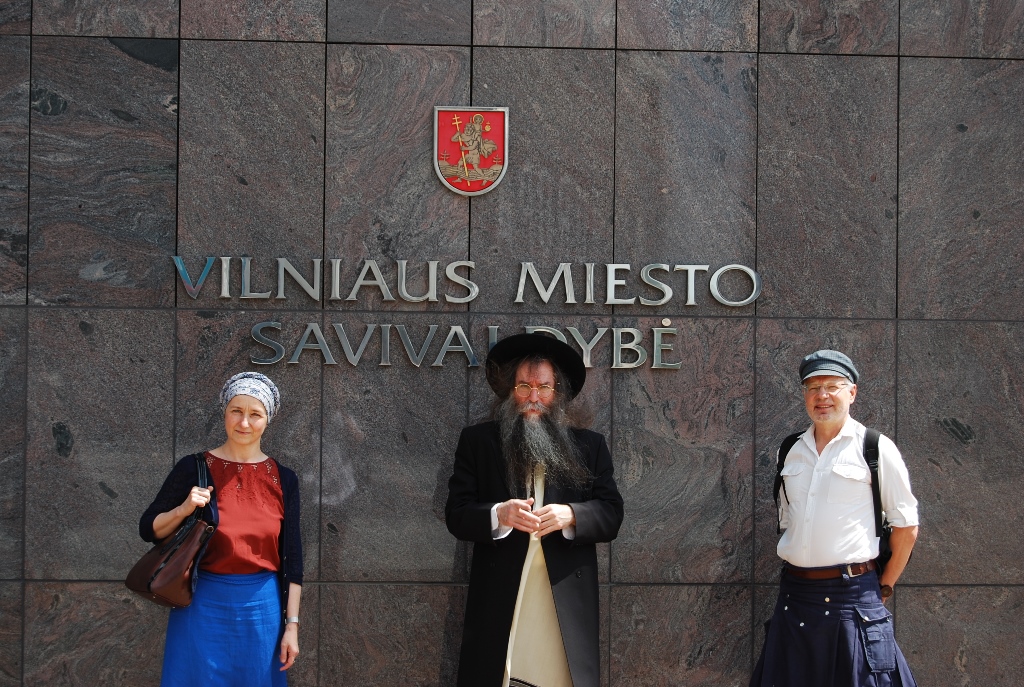 The aim of the meeting was to plead for sparing the Old Vilna Jewish Cemetery from a mis-located national convention center project and discuss the role and responsibility of the municipality in preserving of the cemetery. Initially the request for the meeting was sent to Darius Daunoras, the head of the Unit for the Protection of Cultural Heritage. After consulting one of the mayor’s advisors, Mr. Daniel Lupschitz, an invitation to join the meeting was extended to Povilas Poderskis, director administration of Vilnius City Hall.

The meeting took place in the premises of the Unit for the Protection of Cultural Heritage. Our three-person delegation was gracious received for an open and free discussion with Povilas Poderskis, director of administration; Darius Daunoras, head of the Unit; two architects, Vincas Brezgys and Paulius Jonys, both of of Vilniaus Planas, an institution of Vilnius City Hall. Mr. Poderskis is also the chair of the board of Vilniaus Planas.

After a warm welcome by hosts, the friendly and mutually respectful discussions went to the heart of the issues. Both Planas architects brought to the meeting the printed maps of “the project proposal for arrangement and commemoration of the territory (U.K. 31812) of the Old Vilnius Jewish Cemetery in Šnipiškės near the Congress Centre Rinktinės St. 1”.

Instead of getting into details of the project proposal, Rabbi S.J. Feffer gave a forceful and passionate lecture. He said, “I understand the maps, and your plan is good, but only for another site, not for this site. It is shameful what the Soviets had done, stealing all the gravestones  and structures and erecting a Sports Center in the middle. Dead people are crying. To use the site for anything other than what it was, is and will always be, the great Jewish cemetery of Vilna, to install bars and toilets over the graves will bring only scandals, shame and permanent conflict to this great, beautiful city. Can’t you move this project? To save the cemetery, let us make the wall around it so that the cemetery should stay untouched.”

Mr. Poderskis replied that the whole idea of the project of the Congress Center on this site is under the competence of the national government, not the municipality. Indeed, the ruin of the Soviet-era sports palace occupies less than one quarter of the territory of the cemetery. The other three-quarters are under the jurisdiction and responsibility of Vilnius’s city authorities. The city prepared a plan “for arrangement and commemoration” by marking the perimeter of the cemetery. Mr. Poderskis explained that 24 slopes each half a meter high around the site will inform passers-by about the border of the Old Vilna Jewish Cemetery. 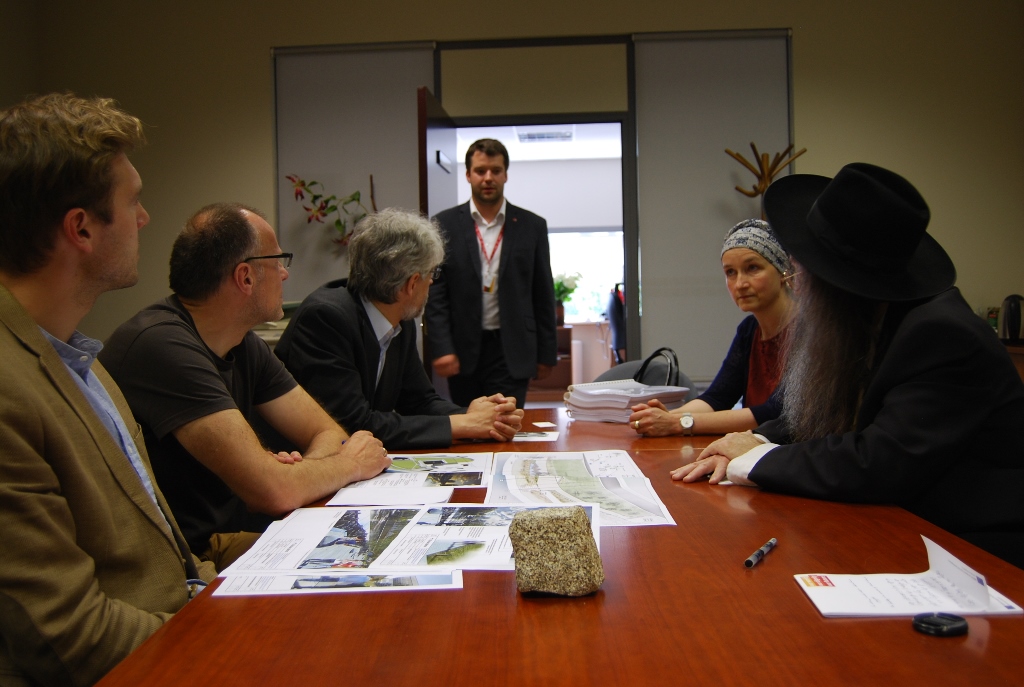 It seemed to us that the working phrase “arrangement and commemoration of the territory” is a masterly coined Orwellism to circumvent the term “protection of the cemetery.” The terms “arrangement” and “commemoration” have no precise legal definition and are open to free interpretation. According to the presented plan, the territory will stay open and in principle, unprotected. An unprotected area is easy pray for any current need, for example. for parking cars. When Rabbi S.J. Feffer speaks about “wall”, he has in mind the physical fence around the cemetery as well as taking the entire area into protection by the law for preservation and restoration as the great cemetery it is, home to the remains of many thousands of Vilna Jewish scholars and everyday people alike, over half a millennium.

When discussion turned to the pieces of Jewish gravestones that were  brought to the Old Cemetery to use them as material for “commemoration”, Povilas Poderskis agreed, the stones should be returned to from where they originally are  to Zarétshe cemetery. So it seemed this time around at least, that the grave stones from another cemetery are saved from being used for a fake monument for the Old Jewish Cemetery (this reprieve came after the articles by Professor S. J. Leiman and myself were published in Defending History).

Mr. Poderskis suggested there should be sort of declaration or agreement with world Jewry about the protection of the Old Vilna Jewish Cemetery and he is willing to help this to happen.

At the end of the meeting, our small team presented Vilnius City hall with Ruta’s petition (nearing 44,000 signatures), and dozens of articles, many of them translations into the Lithuanian language.

When we left the meeting room, our hosts excused us for not accompanying us to the exit. They explained their need to stay for a while and discuss the issue among themselves.