“Leave in Peace the Graves of Our Great Vilnius Jewish Ancestors”: Plea Leaps from Defending History to Lietuvos Aidas

Posted on 6 August 2020 by Defending History

In 2015, Ruta Bloshtein first publicly spoke out against the Lithuanian government’s unseemly decision that Lithuania’s premiere convention center should be the Soviet Sports Palace, a monstrosity which desecrates the oldest Jewish cemetery in Vilnius. Her article  (that appeared (in Lithuanian and in English translation) in DefendingHistory.com included her plea, “Palikite ramybėje mūsų didžių protėvių Vilniaus žydų kapus” (Leave in Peace the Graves of Our Great Vilnius Jewish Ancestors).

On August 1, 2020, her words became the headline of the main article on the front page of Lithuania’s leading nationalist weekly, “Lietuvos Aidas”. The weekly was founded in 1917 by Antanas Smetona, who in 1918 became Lithuania’s first president. It was revived in 1990, controversially, as the state newspaper of newly independent Lithuania, and privatized a few years later. The weekly has grown in quality under editor Rasa Pilvelytė-Čemeškienė and claims a circulation of 7,000. 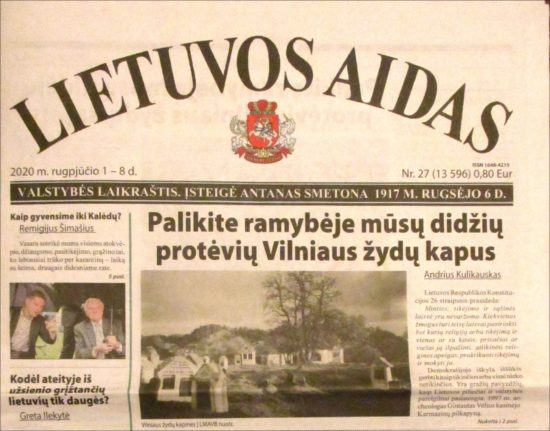 “Lietuvos Aidas” republished my long article, which originally appeared on July 27, 2020, at the leading nationalist portal, Alkas.lt, where it has received 2,200 views and is the 5th most viewed article of the last 10 days. Alkas.lt is published by champions of the ancient ways of the Baltic people, their faith and world view. It is inclusive of a wide spectrum of nationalist views, which can reach some vile and conspiratorial extremes. However, the publishers are sympathetic to religious minorities. I am a nationalist and seek to place our opposition to the government’s plans within that boisterous nationalist discussion. Frankly, within Lithuania’s social fabric, the ideology of the nation state is central and singular. Arguably it is even at the core of humanists such as Linas Vildžiūnas and Tomas Venclova, and some native Lithuanian Jews, such as Chaimas Bargmanas. A challenge for nationalists is to learn from history and recognize that the moral legitimacy of a nation state is inextricable from the vitality of its minorities and its diaspora.

I intended my article as an invitation to the event which our small group “Gerbkime kapines” (Respect Cemeteries) organized on July 29, the Eve of Tishebov. I noted Ruta Bloshtein’s petition, signed by more than 50,000 people, and concluded with her historic article from July 29, 2015 in DefendingHistory.com. Alkas.lt editor Jonas Vaiškūnas cut out that article and instead published a link to it. He also used Ruta Bloshtein’s heartful plea for my article’s title. This generated a variety of comments as to when and how our great Lithuanian ancestors became Jewish? Ruta and I interacted respectfully with others in the comments section and thus disarmed the usual gang of anonymous scribblers. I translate two recent comments:

AI: People of different ethnicities and faiths must strive for the common good on the basis of truth and respect for one another concerns. If Jews respected Lithuanian efforts to safeguard their ethnicity and land, then they would receive more support from Lithuanians.

Raminta: I was born in the days when children where taught the nursery rhyme, “children take up little sticks and kill that little Jew”, and parents would frighten children that “The Jew will catch you, and stick you naked in a barrel, with nails protruding all about the inside, and will roll it from the top of a hill. Blood will drain from your punctured body, and they will use it to bake matzahs”. For most of my life I looked at the Jewish ethnicity with an ingrained feeling of fear and hatred, which in time grew into respect. I admire this people’s unity and support for each other. Descendants scattered about the world are gathered into a harmonious family, material and moral support is granted to those suffering poverty, they are helped to rise up and establish themselves. With this article the Jewish people once again proves that it cares not only about the living but also the memory of their ancestors. I don’t know the extent to which they will succeed in protecting Jewish cemeteries, but we should learn from such determination and such unity.

Truth be told, I focus in my article on that which many Jews would not, which is that there is a painful division between the official Lithuanian Jewish Community, which sides with the government, and handfuls of Litvak dissidents, of whom there are five in our group: Arkadij Kurliandchik, Ruta Bloshtein, Chaimas Bargmanas, Polina Pailis, Regina Kopilevich. I explain the strategy by which even such a tiny group, if committed over decades, can foster the social change that will ultimately transform public policy. In particular, Alkas.lt and Lietuvos Aidas published my illustration of the cemetery’s wall that will grow out of our respectfully placing tens of thousands of stones. They also published a 1913 photograph by Jan Bułhak which refutes any doubts that there was a cemetery, that it was destroyed centuries ago or that we don’t know what it looked like. My father, Edmundas Kulikauskas, purchased copies of ten photographs by Jan Bułhak from the Library of Academy of Sciences, and they are proving invaluable.

My mother Rūta asked me today, “Why do you care about this cemetery more than Jews do?” Growing up in our Lithuanian family in California, I felt that if it is a treasure to be Lithuanian, then we should embrace all who contribute to that and welcome all who wish to share in that. I appreciate Lithuanian Jews and wish to clear away any obstacles to their inclusion. We need to empathize with them, what they have suffered, and resolutely comprehend and reject the wide spectrum of crimes endorsed and perpetrated by Lithuania’s leadership in 1941. I wish that we would also marvel that among all of Jews, arguably the most esteemed are the Lithuanian Jews, and what that says about us. Truly the Gaon of Vilna and his people are the Magnificence of Lithuanian Civilization. They colonized our land in peace and not war. They lived as free people, but moreover, as meaningful people. They exercised their faith in the Vilna synagogues and the shtetl utopias. They enjoyed an autonomy where they developed political skills which later served in leading the state of Israel. But I also realize and dare to state that in my utmost I will not and hope to never accept any offer to cede the moral high ground to my equals, even if they be victims of slavery or oppression or genocide. I accept the truth about the Holocaust and that truth sets me free. All of this is why I care more about the cemetery than most Jews do. But there are a very few Jews who care more than me, such as Dov and Chaya Fried, Ruta Bloshtein and Dovid Katz. That is why I care!