Posted on 23 October 2020 by Defending History

RIGA—According to various media reports, including JTA and the Algemeiner, plans are afoot to force the closure of the Museum of the Riga Ghetto and the Latvian Holocaust, whose opening Defending History covered a decade ago. The beloved outdoor museum is one of the very few museums in Latvia to provide an accurate historic view of the Holocaust and large scale individualized commemoration of its victims in Latvia. The role of local collaborators and the antisemitic nationalist establishment in Latvia in 1941 is amply documented by facsimiles of newspapers and documents of the times, all with full translation. On the commemoration front, there is a permanent outdoor exhibit with virtually all c. 70,000 names of the Riga Ghetto’s victims inscribed. It is a unique institution, for the Baltics and far beyond.

As ever, maneuvers are being couched in terms of sudden zoning changes, the need for ever-more business space (even in the midst of a major pandemic) and other ruses. There is a higher question of whether the government of Latvia, where around 97% of the Jewish population was murdered, is “quite happy” to see the demise of an independent and highly productive museum in Riga, the nation’s capital, or whether it feels an obligation to step in to save the museum from the machinations underway. Following the international media coverage, a one-month reprieve has reportedly been provided. 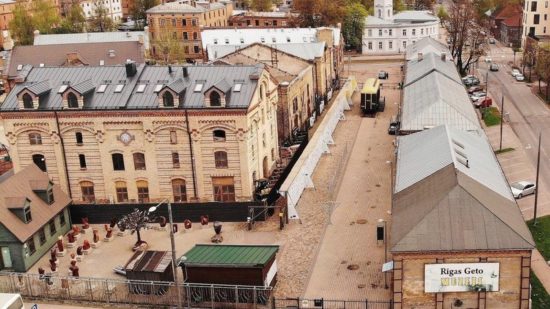 In the meantime, the museum itself has launched an international petition on Change.org which reads as follows:

This year, the Riga Ghetto and Holocaust in Latvia Museum celebrates its 10th anniversary. Ten years ago, it started working in an abandoned territory. By now, the museum has achieved international recognition, for example, having organized conferences, which brought together acknowledged experts and participants from every continent. The museum also hosts nine permanent exhibitions, which have been visited by more than 170,000 people from all over the world.

Unfortunately, this month can be the last one in the museum’s existence, as there is a risk that the Riga City Council will not prolong the existing lease agreement. The management of the museum suspects that the current situation may be caused by the vested interests of private businesses.

Ten years ago, the Spiķeri building complex, where the museum is now located, hosted a central market container and transport washer. Overall, the territory was in a state of degradation. In 2010, the Shamir Association and the Riga City Council signed a land lease agreement on a non-reimbursable basis, which allowed the Association to create a museum in memory of the Holocaust victims.

Over the lifetime of the museum, it has organized over 30 educational exhibitions and 6 international conferences, published 47 books in seven languages, created nine permanent exhibitions, and also developed a large-scale reconstruction project for the further development of the museum. This project has been highly evaluated by a number of experts, including the former president of the Latvian Academy of Sciences, Professor Ojārs Spārītis, and the leading specialist of the United States Holocaust Memorial Museum (USHMM), Professor Michael Berenbaum.

In August 2020, the Riga City Council’s Property Department blocked any discussion of the reconstruction project, arguing that the territory was allocated to the museum for only ten years without the right to rebuild. As a result, the plans for further development have been stalled.

The Shamir Association believes that in recent years the museum has been subjected to consistent and purposeful harassment by a private business aiming to seize its territory. The harassment has included lawsuits, complaints to various authorities, and unauthorized seizure of territory.

The lease agreement of the museum area ends on 22 October 2020. The meeting of the Riga City Council, where they contemplate making a decision on the issue, is scheduled for 27 October 2020. Therefore, by the moment when the fate of the museum is decided, its existence in its current premises would be illegal.

“Creating a museum is a long and difficult task. Destroying is easy. The Riga Ghetto and Holocaust in Latvia Museum has already made and continues to make a great contribution to educating the public about the fate of Latvian Jews, the Holocaust and the invaluable importance of active public participation. The relocation of the museum would become an unbearable burden for the Shamir Association – in fact, it would mean the destruction of all efforts and contributions made so far,” emphasizes Rabbi Dr. Menachem Barkan, Chairman of the Shamir Association. He adds, “The Holocaust was not only caused by those who killed – it happened with the tacit consent of the indifferent majority. I would like to hope that nothing of that kind is possible nowadays. In this sense, the decision on the fate of the museum will also be symbolic – it will show the values of the authorities and the society. We therefore ask for the support of the whole society because the future of the museum depends on the active participation of us all.”

UPDATE: According to the latest information, the contract will be extended by one month, pending further discussion. However, the fate of the museum remains under threat.