“Higher Mathematics” of the Lithuanian Holocaust

Posted on 1 December 2013 by Defending History

NOTE: This English version of a recent piece by Professor Pinchos Fridberg (of Vilnius), translated by Lumilla Makedonskaya (of Grodno), is for our readers’ information. In the case of any doubt or matter arising, the original Russian text alone is authoritative.

Here in front of you is a paper arranged in full accordance with the structural requirements of academic articles: from the Abstract to Acknowledgements, with quotations followed by references to their sources, with original spelling of  names following in brackets. It is not meant to challenge the reader, who may smile the use of the phrase “higher mathematics” here.

I would like to inform those readers about two things: firstly, higher mathematics (such is the English common phrase, the reference here is to higher arithmetic of course; some will recognize  “numbers theory” [1] in the section on mathematics, which studies “integer numbers and similar objects”; secondly, I am the only one “darling Pinchos in Lithuania calling himself a “professor” [2] as the former head of BNS so kindly put it not too long ago. So  darling, that internet magazine Face (“Veidas”) for some reason accompanied my publication [3] with as many as twenty supposed images of my face (their underlying assumption being that all Jewish faces have one unitary certain look).

While writing the article I widely used professor Vytautas Landsbergis’ method: I tried to express the confirmations in the form of a question, as well as making use of his favorite expressions “it seems to me”, “we should think” and “perhaps”, though to tell the truth, without references.

Pythagoreans Euclid and Diophantus made significant contribution to the formation of higher arithmetic, and in the colloquial unscientific sense of “higher mathematics”; so did deputy director of the “International Commission on the Evaluation of the Crimes of the Nazi and Soviet Occupation Regimes in Lithuania” (hereinafter — the Commission) and its coordinator of educational programs Ingrida Vilkienė. The following axiom (statement  requiring no proof [6]) was enunciated by her [4], [5]:

“It is important to know the numbers!”

Due to the fact that the Commission does not respect their own axiom, on 14 October 2013 I sent a letter to the Chairman of the Lithuanian Seimas, the esteemed Ms. Loreta Graužinienė. Here is the text of that letter (translated from Lithuanian). 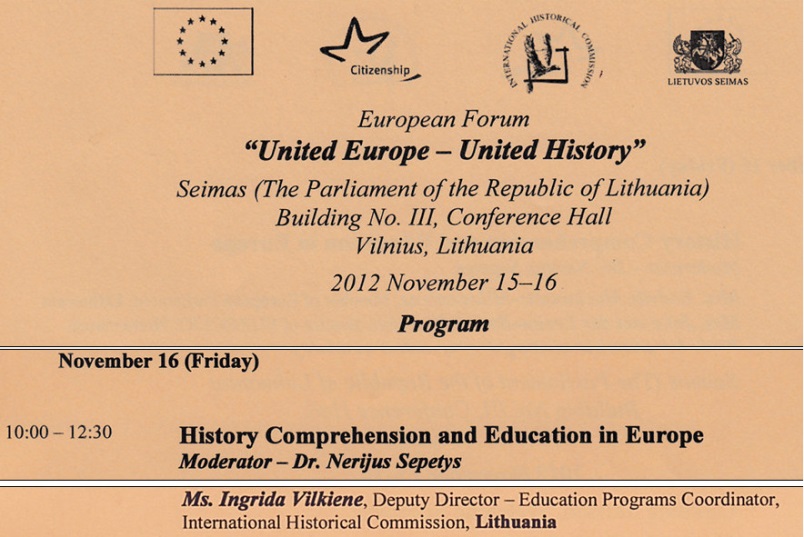 I am writing to you because the Seimas was one of the organizers of the forum “United Europe – United History.” The Seimas’ emblem was placed on the forum’s program, all the meetings were held in the Seimas’ assembly hall.

I would like to introduce one report to you, it was made on behalf of the Commission:

I attach the transcript of this report.

I would ask you to read my letter to Seimas members. It is not about stealing a bag of sunflower seeds, the discussion of which took so much of Seimas’ time. It refers to the report that disgraced and keeps on disgracing Lithuania.

Do you not think that all the facts contained in the transcript must be officially refuted?

Do you not think that after such a report the heads of the Commission should have been made to resign long ago?

I’m waiting for the reaction of the Seimas.

Pinchos Friedberg — an ordinary citizen of the Republic of Lithuania, with the right to vote.

What is the real number of the murderers of Lithuanian Jewry?

On 25 October 2013 the  portal delfi.lt published [7] an article “After Lithuanian [i.e. government-sponsored — Tr.] research on the lists produced by the ‘Litvaks’ of new suspects for Jewish killers.” Its author Daumantas Liekis writes (here translated from Lithuanian):

“In 2009 a list of 4233 Lithuanians accused of the murders of Jews was published on the site of the Lithuanian Jewish Community in Israel [it was the Association of Lithuanian Jews in Israel].  Immediately after that the Lithuanian government authorized its ‘Genocide and Resistance Research Center of Lithuania’ (hereinafter — the Center) to investigate the  charges brought up. After three years of work with archival documents Lithuanian historians managed to ascertain that out of the mentioned 4,233 people 1,070 possibly (Lithuanian: galimai) took part in the genocide of the Jews.”

Simultaneously, the chief specialist of the Center for public relations Vilma Juozevičiūtė informed the world that during the research a further 985 (yes, not five or ten, but precisely nine hundred eighty-five!) people were found, who might have participated in the genocide of the Jews and were not mentioned in the Israeli list.

Thus, Ms. Juozevičiūtė asserts, in the result of this research it was  found that, (translated from Lithuanian):

From the point of view of formal logic we should think that even that “small” number is exaggerated. For instance, I do not understand on what basis Ms. Juozevičiūtė adds numbers 1,070 and 985? After all, it is said those people possibly took part in the genocide of the Jews. That is, perhaps, they took part or perhaps they did not! This means that the true number of the murderers might, as a matter of principle, be within the range from zero to 2055.

But genuine experts not on a campaign of political minimization, such as Wiesenthal Center Israel Center director Dr. Efraim Zuroff [8] disagrees with Ms. Juozevičiūtė’s statement, he considers the number 2,055 massively underestimated. This is not surprising. After all, according to Arturas Račas [2], the former director of the news agency BNS (Baltic News Service), this “E. Zuroff should have been in prison together with Hezbollah terrorists for a long time already. For life and without the right for pardon.”

It would be interesting to find out whether there had been a Lithuanian list of genocide participants before the Israeli list appeared? And if there had been, how many people did it include? Besides, it’s even more interesting what those same historians were engaged in until 2009, if during only 3 (three!) years they were able to ceremoniously delete 3,163 people from the Israeli list and incidentally “came across” some 985 new ones just now? After all, if my memory serves me right, the Center was established in 1992, and the Commission , in 1998.

In the light of the above, a very difficult task arises: from the given three numbers 4,233, 1,070 and 2,055 to derive a general term formula of the sequence of numbers, which would let us predict the results of further historians’ research. Maybe, we should use probability theory of numbers in search of a solution?

But one must dwell on one more list. That is the list of Lithuanians who rescued Jews. Unfortunately, it is not as long as we would like it to be. Those noble people risked not only their lives but also the lives of their loved ones. Rescuing their fellow citizens, they saved the honor and dignity of Lithuania. If not for those Lithuanians, the whole history of the Holocaust would have been reduced to the likes of Impulavičius, Lileikis, Noreika, and Professor Juozas Ambrazevičius-Brazaitis, who signed the order for the Jews to be incarcerated within one month in the Kovno Ghetto.

The Righteous are awarded the Cross of the Savior (Žūvančiųjų gelbėjimo kryžius) by the President of Lithuania. There are very few of these people alive, all naturally being well over 80. Today they do not need greeting cards, but financial support. In order not to be unsubstantiated, let me give just one example: in July 2011 in Kaunas Alfonsa Riaukaitė,  Righteous among the Nations, died, zichróyno livrócho (may she be of blessed memory). The sick woman lived her last year in poverty on the state pension of 347 litas (around a hundred euros a month 100).

Partisans and former ghetto prisoners get a monthly “addition” to their pensions of 180 litas (52 euros). Why are the rescuers of Jews, awarded with the Cross of the Savior, not paid the same addition? Are the authorities waiting until the question resolves itself naturally with their imminent disappearance?

Let me conclude the discussion with a quote from Professor Leonidas Donskis, Euro parliamentarian, “Where is that line?” [9], where he nobly and boldly says:

“I’m not going to obey the will of the Lithuanian language “standardizers” and write the word “Holocaust” with a small (lowercase) letter.” (Donskis 2010)

Hats off to the editor of the online magazine Veidas Mr. Jonas Okmanas. On 21 October I sent him a short letter with a question whether the magazine Veidas would have enough courage to publish the transcript of the speech delivered in the Seimas. Within nineteen (!) minutes,  I received a reply consisting of a single word “Published” along with the link [3]. With this act the magazine Veidas, which means “face” in Lithuanian, demonstrated that it has, in fact, its own face! After all, not a single serious Lithuanian language portal agreed to publish this transcript even as an advertisement (For payment). Were they ashamed? Afraid of someone? Or perhaps they no longer need money? I have no idea.

I do not express my gratitude for discussing the article to Wiesenthal Center director Dr. Efraim Zuroff and the editor of the magazine Defending History Professor Dovid Katz, because I did not discuss it with them.

Pinchos Friedberg (Vilnius) is retired. His hobby is irrational numbers. Comments on the article may be sent to: high.arithmetics@gmail.com.

I quote Professor Leonidas Donskis, Euro parliamentarian, in my article [9]; he says that he “is not going to obey the will of the Lithuanian language “standardizers” and write the word “Holocaust” with a small (lowercase) letter.” In connection with this quote I considered it necessary to acquaint the reader with the statement of the State Commission of the Lithuanian Language (Valstybinė  lietuvių kalbos komisija – VLKK) from November 5th, 2013, “About the word Holocaust” («Dėl žodžio Holokaustas»), which appeared yesterday, November 20th, 2013, on the site of the Jewish Community of Lithuania (LJC). It says (translated from Lithuanian):

“VLKK did not approve the LJC’s proposition “to adopt a resolution, which would specify that the word Holocaust should be written only with a capital [upper-case] letter.”

My article contains the following words:

Partisans and former ghetto prisoners get a monthly “addition” to their pensions of 180 litas (52 euros). Why are the rescuers of Jews, awarded with the Cross of the Savior, not paid the same addition? Are the authorities waiting until the question resolves itself naturally with their imminent disappearance?

To tell the truth, I didn’t have enough courage to turn the last question into a statement. Though the Lithuanian authorities did find that particular courage. On November 19th they dotted the i’s and crossed the t’s [10], [11]!

Editor’s note: Please see the Pinchos Fridberg Section, as well as  a page linking to all the known  available English translations of documents in the debate. To this day,  members of the state-supported International Commission for the Evaluation of the Crimes of the Nazi and Soviet Occupation Regimes in Lithuania have failed to apologize to Professor Fridberg for the calumny that conitnues to appear about him on the Commission’s own website.