Estonian nationalists demonstrating outside Tallin’s Russian Embassy explained their view that ‘The Holocaust pales before the hundreds of thousands of people who were murdered by the Communists, the annihilation of dozens of ethnicities and the mass deportations!’

The BNS report carried by Delfi.lt (English translation here) which contains the quote also reproduced the image of the ‘red-brown scorecard’. 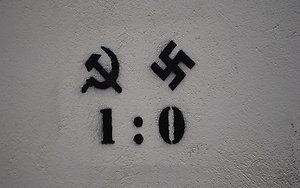 It has been used in the past for red-brown issues, for example in 2009 when Israel’s president Shimon Peres was attacked for differentiating between Nazi and Soviet crimes.

It is not known whether any of the Baltic ‘genocide specialists’ have responded to the Estonian nationalists’ statement, carried as a news story on the region’s major news portal Delfi.