Posted on 16 February 2021 by Defending History

VILNIUS—This year the ultranationalist gathering on today’s February 16th national independence day took place in the Old Town, at the newly erected statute of Lithuanian author, scholar and patriot, Jonas Basanavičius, one of the signatories of the Declaration of Independence of 1918. Beside the national tricolors, I saw two more types of flags for “Pro Patria” and “Nacionalinis susivienijimas” (National Unity). Pro Patria is known as an ultranationalist movement targeting youth and an outlet of homophobic, Holocaust revisionist and xenophobic materials and initiatives. The National Unity seems to be mostly the same group of people, aspiring perhaps somewhat more to national politics.

The event got underway at 6 PM, when it was already dark outside here. About 80 people gathered altogether. There were many burning torches for participants to bear .

The sole speaker explained why this event is necessary when there is no shortage of public events to commemorate and celebrate the anniversary of national independence. In his view, the core concern is that fifty years from now Lithuania as an (ethnic) nation might disappear. Therefore, the ethnocentric agenda should prevail in politics. Beside the signatories of the National Independence Declaration of 1918, there are two national symbols to cherish: (1) the June 23rd  1941 “uprising” (when LAF white-armbander “rebels” brutally unleashed the violence of the Holocaust on helpless Jewish neighbors) and (2) the Nazi collaborator Jonas Noreika. The speaker alleged there is a plaque for June 23, 1941 uprising in Gedimino Prospect, the central street in Vilnius. In fact, there is a building on the city’s central thoroughfare where on the façade are engraved names of men, some of whom have ambiguous records of their fight for freedom. The name of Jonas Noreika is one of  them. There is also a plaque for members of the LAF per se. 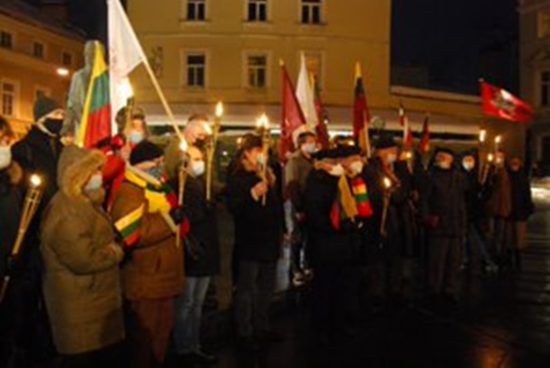 After a minute of silence to honor the signatories and singing of the national anthem, the organizers invited the assembled to march towards the symbolic places in downtown to put the candles there, especially beneath the plaque for Jonas Noreika at the National Library of Sciences, a source of major international shame to Lithuania, noted in a recent New York Times op-ed by Noreika’s own granddaughter.