Annual Memorial for the Jews of Svintsyán (Švenčionys): Small but Well Done

Posted on 5 October 2014 by Defending History 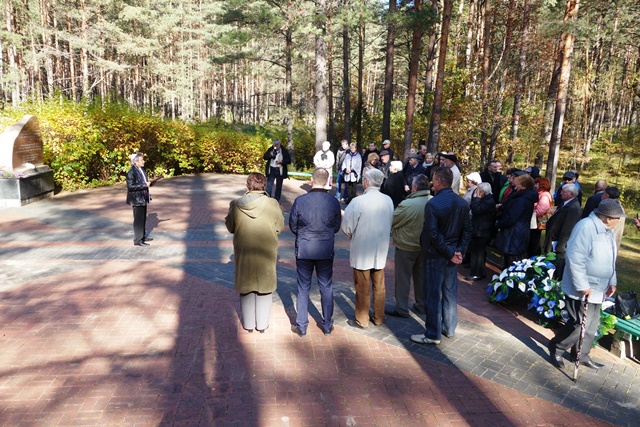 Misha (Meyshke) Shapiro (at left), head of a region’s tiny remnant Jewish community, chairs the annual commemoration in the forest at a mass grave where 8,000 Jews were killed in two days in October of 1941.

Each year, the numbers of those attending the event, held annually on the first Sunday of October, has been decreasing. Still it is qualitatively perhaps one of the most well-executed memorials in the country because of a policy in force for many years now (since an untoward confrontation between Holocaust survivors from Israel and local government officials in the 1990s when the latter tried to utilize the tragedy for current nationalist agendas). The successful policy is to keep politics and nationalism well out of it. Speakers with very diverse opinions do not bring in current burning debates about Holocaust history, the children from local schools come in civilian clothing rather than national costume, and no anthems are played or political statements made. 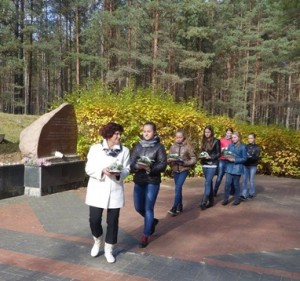 There was a meaningful and tasteful presentation by a group of local school pupils.

Speeches were given naturally in the historically native languages of the region — Belarusian, Lithuanian, Polish, Russian, Yiddish — or in English, without fanfare or apologetics. There was a genuine sense of loss. Moreover, there were no attempts to massage the gruesome facts of the massacre. Various speakers noted that the volunteer shooters were local “patriots” and most of the children were killed (to save ammunition) by being smashed against trees, one of which bears to this day the indentation scar formed by incessant smashing of children’s skulls.

For many years now, the organizer, who invests huge energy in bringing it all together is Misha Shapiro, the head of one of the smallest regional Jewish communities on the planet, now counting “well under ten” in a vast region including Ignalina, Nemenčinė (Nementshín), Pabradė (Yiddish Podbródzh), Švenčionys (Svintsyán) and Švenčionėliai (Svintsyánke). His work, which includes preservation and memorialization of historic Jewish sites throughout the region, is a constituent part of the Jewish Community of Lithuania based in Vilnius. Mr. Shapiro is the son of Ziske Shapiro (1918 – 2003), an unforgettable personality in the region. Various speakers recalled another of the stalwarts of the annual event, Blumke Katz (1913 – 2006), who became known in her later years as the living encyclopedia of Jewish Svintsyán.

The event was ably chaired by Misha Shapiro, whose introduction included Lithuanian, Russian and Yiddish. Speakers in Yiddish included Vilna Ghetto survivor and Holocaust educator Fania Yocheles Brantsovsky (who paid tribute to the Jewish partisan resistance of which she was part); Defending History editor Dovid Katz (who read two Yiddish poems by his late father, Svintsyán-born poet Menke Katz); and member of the Lithuanian parliament Emanuelis Zingeris who spoke in Lithuanian and Russian as well as in Yiddish. The living use of Yiddish generated a feeling of warmth and authenticity for all the assembled, whatever their background, a gentle reminder of who the destroyed people were and what they spoke. 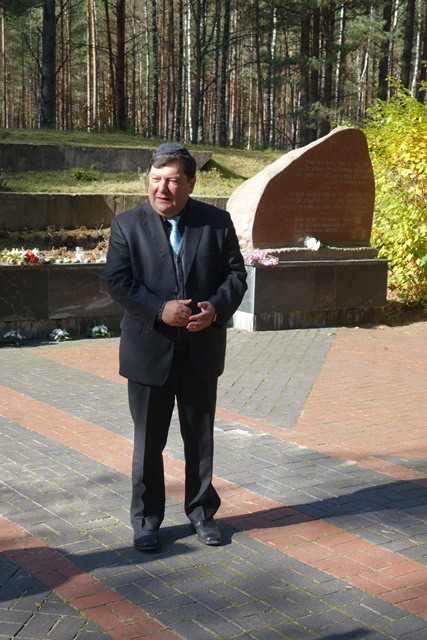 Member of parliament Emanuelis Zingeris addressed the gathering in Yiddish, Lithuanian and Russian, stressing that the annihilated communities were Yiddish speaking and part of a unique and massively productive culture.

A number of speakers referred to people born in Svintsyán or its immediate region who made a mark with their achievements, locally or in most cases in the countries to which they emigrated, most often the United States. The long list includes, for example, Rabbi Isaac Jacob Reines (1839-1915), a founder of the Mizrachi movement (modern Zionist orthodoxy) who established in Svintsyán the first yeshiva (rabbinicial academy) that included secular subjects alongside genuine (not watered down) Talmudic studies. Mordecai Menahem Kaplan (1881-1983) went on to found the Reconstructionist movement of Judaism in the United States. Meyer Matzkin (1880-1976) became  a famous American artist. Arkady Kremer (1865-1935) was a prime founder of the Jewish Labor Bund.

A number of well-known local families were mentioned by various speakers, including Gilinsky, Kovarsky, Natish, Tarasheisky. Information on the town’s Jewish history is available at Jewish Gen.

Darius Velicka, member of the regional council, who has been active in preserving local Jewish heritage and memory, reminds the assembled that today’s younger generation needs to understand that the murdered thousands were citizens of Lithuania and part of the country’s rich multicultural fabric. 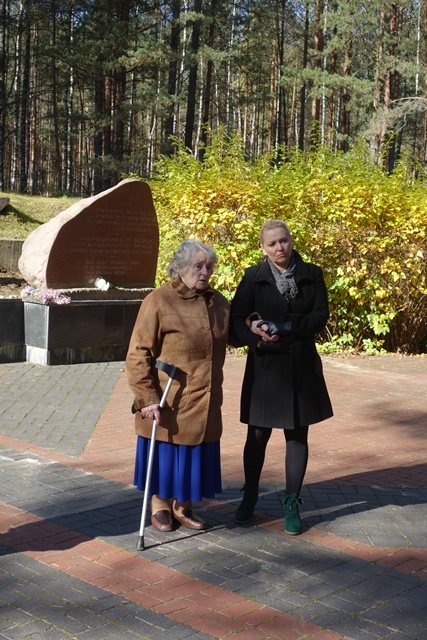 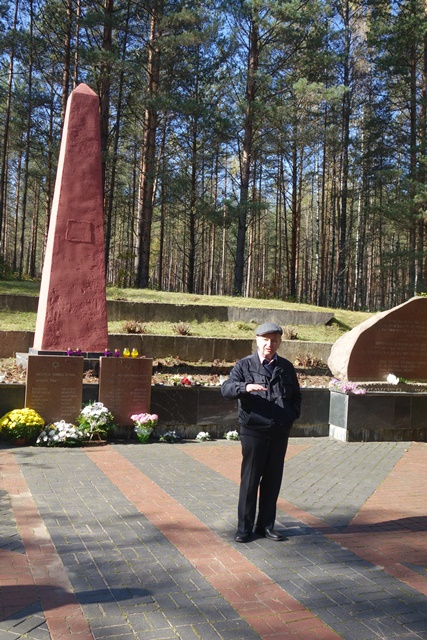 Milan Chersonski addresses the assembled at the memorial. For two decades he directed the Vilnius Yiddish theatre and then, from 1999 to 2011, was editor of the Jewish community’s quadrilingual newspaper, “Jerusalem of Lithuania.”

Councilor Velička has played an active role in keeping alive the Jewish heritage, including the restoration of historic sites and representation of Jewish history in museums and schools, and seeking to welcome ever more scions of old Jewish Svintsyán from around the world. Thanks to his work, a number of cemeteries have been restored and protected.

Guests from abroad included Riva Gurvitsh (Davidovits), who comes each year from Sweden with her husband Abram Davidovits. Her late father was Shimke (Simon) Gurvitsh (1913-2006) of Svintsyán. St. Petersburg Yiddish student Yulia Rets came for the event as well.

If there was any one star of the event, it was the last Jew of Svintsyán, Meyshke Preis (Misha Preisas), a native of Kovno (Kaunas) who moved here after the war. He survived the Kovno Ghetto as well as Auschwitz, Dachau and Stutthof concentration camps after the ghetto’s liquidation. Since his wife’s death last year, he suffers extreme loneliness. It is hoped that caring people will take an interest and visit, from time to time, the last Jew of Svintsyán, home to over 4,000 Jewish citizens before the Holocaust. Local school pupils especially have the unique opportunity to learn directly from the last Jewish mohican of their city. 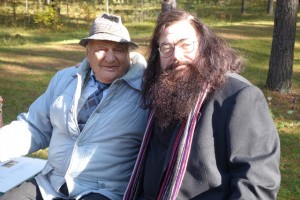 Meyshke Preis (Misha Preisas), the last Jew of Svintsyán (at left), a survivor of the Kovno Ghetto, and of Auschwitz, Dachau and Stutthof concentration camps, with Defending History editor Dovid Katz.

Our report on the October 2010 event