VILNIUS—According to a report [full translation here] and photo spread in today’s Lrytas.lt (rapidly picked up on other major portals), a multitude of chairs, each with a mock 1000 euro banknote taped on, were on display today on the still unbuilt part of the old Vilna Jewish Cemetery, directly on top of thousands of extant graves covered by concrete slabs from the Soviet era. This is reported as a demonstration coordinated by the National Tourism Business Association (NTVA), the Lithuanian Tourism Association (LTA), and the Lithuanian Hotel and Restaurant Association (LVRA). The NTVA also published a “video of the demo” on Facebook. The video carries one line of text which reads, in translation: “By this action of empty chairs, the tourism industry reminds the state about the unemployed Palace of Sports.”

The point? To demand that the new convention center situated in the heart of the five-hundred year old Vilna Jewish cemetery be erected as soon as possible. [Update of 2 May 2020: Simon Gurevich (Simonas Gurevičius), elected head of the Vilnius Jewish Community, representing the overwhelming majority of Lithuanian Jews, rapidly condemned the stunt, in Lithuania’s mainstream media, and on the community’s Facebook page.]

Presumably these major organizations obtained a city permit for the stunt. When DH asked a contact at the municipality about whether the city’s permission had been given, the employee, who asked not to be named, said: “Of course it was virtual, photoshopped, but reported in the press release as being on the ground, in order to wind up the Jews so they will go crazy about their so-called cemetery.” Two DH staffers rushed Friday midafternoon to the scene and found no trace of recent activity. [Update: DH has no further information on whether the Lrytas.lt report is accurate or whether it was a photoshop stunt; larger news outlets can no doubt rapidly find out. Morally speaking, DH believes the difference is negligible as to desecration and humiliation of a major Jewish cemetery in the heart of Holocaust-territory Eastern Europe, and as to revival of the old antisemitic trope of “Jews and banknotes” coming no less in the midst of a pandemic.] 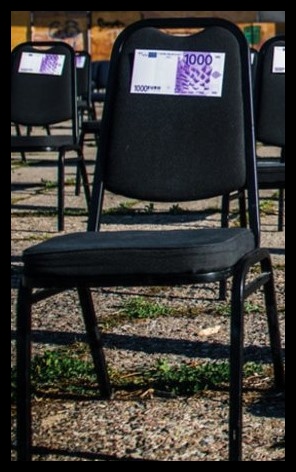 One of the empty chairs with a mock 1000 euro note at the Old Vilna Jewish Cemetery on May Day. Can this be fixed by lavish events and coins honoring the Gaon of Vilna (whose parents and children may lie buried right beneath the euro-notes)?

Arguments are offered as to how this would rescue the post-coronavirus economy. There is no mention of the alternative of building the new convention center at another venue, and benefiting from the vast prestige and tourism of a restored major European Jewish site. In fact, there is no mention that there ever “was” a cemetery there (while thousands of people’s bones lie untouched, the Soviets pilfered all the gravestones).

Defending History’s take: “Whether on the ground or the web, this is one of the most disturbing manifestations of ‘elite antisemitism’ in Eastern Europe in recent times. Besides the humiliation of thousands of buried from the minority annihilated in the Holocaust, there is the classic antisemtic trope associating “Jews and banknotes” alongside the insinuation that only a convention center at this location can bring back the tourist industry after Covid 19. For shame. Vilnius has a number of fine venues for a the new and morally clean convention center that the people of Vilnius deserve.”

There is no mention of the massive international (or local) opposition to the project, nor of the petition that has been signed by close to fifty thousand people to date. There is, moreover, no mention of the opinion that it would do Lithuania’s tourism industry and reputation huge damage to humiliate a Jewish cemetery in a way that would never be contemplated were it a hallowed site of the majority religion. Many Jews, Christians and others have made clear that they would not step into such a convention center. People ask if the mainstream media here will begin to report on all sides of the story.

Will government officials, and agencies and organizations concerned with antisemitism, equal rights, and the adherence to European law on minority cemeteries speak out publicly on the lurid display of mock banknotes over the Jewish graves of Vilnius?

[Updates of 4 May: see also reports in JTA and AJ] 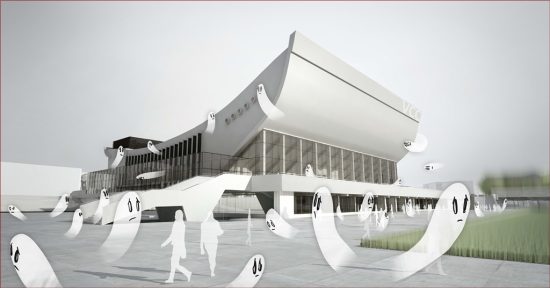 A full translation of the 1 May report in Lrytas.lt follows. Note that the final paragraph refers to the tender announced after the Dec. 2019 “Day of Shame” at which the Old Vilna Jewish Cemetery was  “sold yet again”…

On Friday, rows of empty chairs adorned with symbolic euro notes were placed near the Vilnius Palace of Concerts and Sports: the silent action on the International Day of Labor was held by the country’s tourism industry to draw the government’s attention to the project of the Congress Center which it has promised, for replacing the Palace of Sports.

According to the associations, this is exactly the spot to which the state should direct its investments as soon as possible. The Congress Center, if built in time, would be one of the most effective long-term measures to save the tourism industry, helping preserve existing jobs and create new ones, and contributing to the general recovery of the national economy.

“We have been waiting for the Congress Center to be established on this spot for years, but now, in this crisis, this project is becoming critically important to our sector. The Congress Center will help hotels, restaurants, and other service providers that have suffered severe losses recover and create new jobs, therefore investment in this project is one of the most effective long-term measures to battle the crisis,” says Evalda Šiškauskienė, president of the LVRA in the release.

Organizers of the action say that the empty chairs on International Labor Day reflect the current situation of all the companies in the tourism sector and the vanished customer flows, whereas the symbolic euro notes remind us that the solution to this situation, as well as the money that the state could make, are right under our noses.

“Conference tourism is much more lucrative than leisure tourism, and international events create heaps of direct and indirect economic value.

“For example, in 2019 alone, according to the data provided by Go Vilnius, international events created economic value of 54 million euros for the country, including taxes collected, money spent by participants, and jobs created,” claims Žydrė Gavelienė. president of president of the NTVA.

“A significant part of this money comes back to the state budget. Therefore international events not only sustain the tourism-related sectors but also contribute to the general national economy,” she says.

The times when no events are being held, according to the action organizers, are the best for preparing event infrastructure, which would help strengthen Lithuania’s competitive advantage.

At the beginning of this year, Turto Bankas, the state enterprise that manages state property, announced that public procurement tender for the contractor and the manager of the future Conference and Congress Center are planned to transpire before the end of this year.