Posted on 20 September 2015 by Defending History

VILNIUS—Despite the relatively modest number of participants in the hall, around fifty, the 90th Anniversary Conference of Yivo in Vilnius was unanimously judged to be a major success with Yiddish scholars and cultural leaders from Buenos Aires, New York, Tel Aviv and Vilnius reading papers in English, Lithuanian, and Yiddish. Four papers were in Yiddish (by Lea Garfinkel, Dovid Katz, Abraham Lichtenbaum and Mordehay Yushkovsky), representing a serious Yiddish-in-Yiddish component of an academic conference for the first time in years. Yiddish greetings were also delivered by Emanuelis Zingeris, parliamentarian and founder of the city’s Jewish museum. There were greetings from the Israeli ambassador and the Lithuanian parliament and foreign ministry.

The conference, jointly organized by Yivo’s New York team in partnership with the Jewish Community of Lithuania, was held at the Seimas (parliament) under the friendly gaze of Rimantas Stankevičius, director of the parliament’s Office of International Affairs, who spared no effort to make all feel welcome, whatever their background or local “political profiles.” There were a number of additional sponsors, including the World Jewish Congress’s new Yiddish center in Vilnius led by Yitzhak Averbukh and Professor Mordehay Yushkovsky.

Before start of the conference, a group headed to the old Weinreich residence at Grèys-Pohulánke 14 (today Basanavičaus 16). The wreath was laid by Yivo’s leaders and the photo taken under the memorial plaque (top center of photo). The actual Weinreich residence was a little further down, at the very corner, on the top floor, opposite the old apartment of his father-in-law Dr. Tsemakh Shabad, across the street at Grèys-Pohulánke [/Basanavičiaus] 15. Photo: Irina Guzenberg.

The conference’s de facto hosts were the heads of the two organizing bodies: Yivo’s director, Dr. Jonathan Brent, and Faina Kukliansky, chairperson of the Jewish Community of Lithuania. Adjacent to the conference hall was an exhibit on Yivo’s 90 years of history by Viktorija Sideraitė-Alon. A handsome calendar, jointly produced by the Yivo’s Eddy Portnoy and the Lithuanian Jewish Community’s Sideraitė-Alon, was distributed to the delegates and guests. The conference paid tribute to two stalwarts of Yiddish culture in the hall, Fania Yocheles Brantsovsky, veteran of the Jewish partisans and Yiddish librarian, and Fira Bramson (Esfir Bramson-Alpernienė), longtime director of the Jewish section of the National Library.

A leading conference role was also played by Dr. Lara Lempertienė, head of Judaica at the National Library and director at the Lithuania end of the new digitization project of Yivo materials held in Vilnius. A number of speakers paid tribute to Vilnius librarian and bibliographer Antanas Ulpis (1904 – 1981) who risked his career and more to save Jewish archives that had survived the Holocaust, principally property of Yivo, over a period from forty years. It is widely thought they would have been sent to Soviet paper mills if discovered by authorities.

It was heartening and inspiring to experience — for the first time in years — a genuine academic event in the spirit of the Vilna Yivo, without political manipulation by a few nationalist government agencies that regularly abuse Jewish culture (and Yivo in particular) as PR cover for dubious activities. There was no mention of the state-sponsored “Red-Brown Commission” (officially: The International Commission for the Evaluation of the Crimes of the Nazi and Soviet Occupation Regimes in Lithuania) which is a major engine of the Double Genocide movement that seeks to revise Holocaust history in the direction of Baltic nationalism and downgrade the genocide of the country’s Jewish population (96.4% were killed in Lithuania). Nor was there any mention of the “Jewish Heritage Commission” which many believe was set up early in 2015 to provide cover for state plans to erect a twenty-five million dollar convention center in the heart of Vilna’s Old Jewish cemetery at Piramónt, a project widely condemned internationally, particularly by rabbis around the world of Lithuanian background, and one that is the subject of a growing international scandal. The rapid withdrawal of Yivo’s sterling name from both tainted state bodies is the vital next step in cementing the welcome shift in policy, away from political entanglements with Baltic nationalism and toward the commitment to Yiddish language and culture, Jewish causes, and academic freedom and diversity, all hallowed hallmarks of the bona fide Vilna Yivo. Earlier this year, a Vilnius Holocaust survivor, Prof. Pinchos Fridberg (himself sadly not invited to today’s conference — participants would have loved his nowadays very rare true Vilna Yiddish), wrote to Yivo with a plea for it to disassociate from the red-brown commission.

The benefit to Lithuania from academic and cultural success would be inestimably greater than continuation of the failed policy of abusing Yiddish, Yivo and Jewish culture either for Holocaust obfuscation, distortion and revisionism, or to cover for the multi-million dollar desecration of the city’s old Jewish cemetery.

The conference program is available here, and appears at the end of this report. The free and open discussion at the end of the event, ably moderated by Dr. Brent, alluded to some painful questions for the small but vibrant and energetic Jewish community in Lithuania. One participant noted that Yiddish is still not included as a serious subject in the Sholem Aleichem School, the community’s excellent Jewish day school. Another noted that outside of the one-month summer course, there is no Yiddish taught at intermediate or advanced level anywhere in Lithuania (including at Vilnius University’s Yiddish institute, the World Jewish Congress’s Yiddish Center, and the various Jewish studies programs, centers and institutions about town). When the formal discussion was over, several of the Israeli participants asked if it was true that not a single young Jew from the local community attended the conference. That the question was raised means that much more needs to be done to raise the profile, perceived value, and resources of Yiddish culture throughout the year and independent of any international event. It is long-known that foreign Jewish organizations tend to invest in religion- and Israel-centered education, while ignoring the vast and currently endangered culture of local Jews’ own very recent ancestors in Eastern Europe. 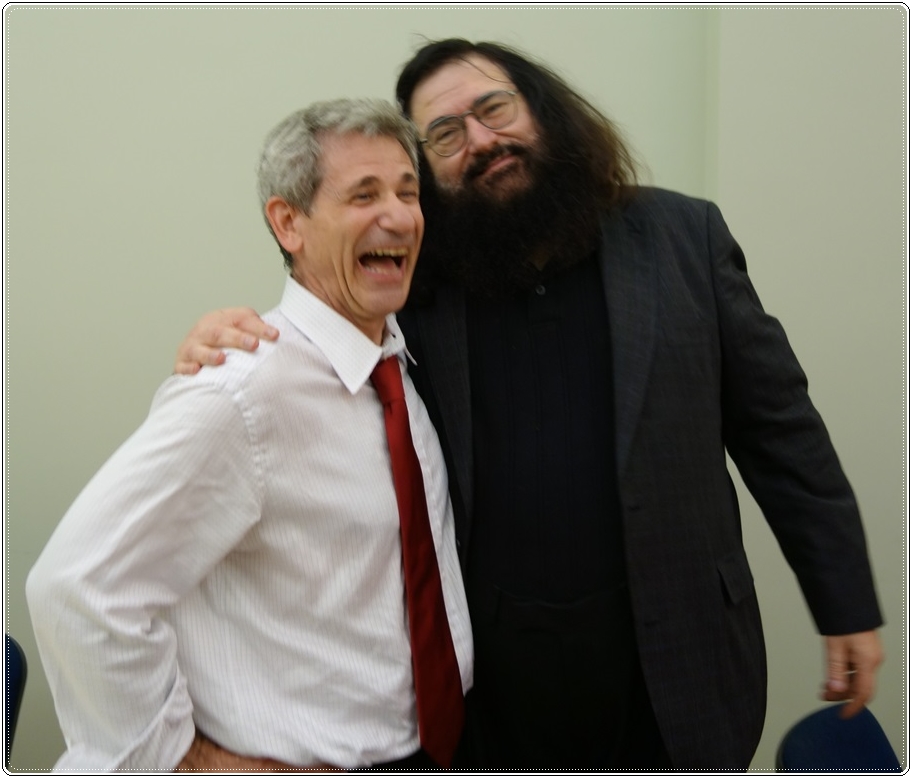 Jonathan Brent, director of Yivo, celebrates successful conclusion of the conference with Dovid Katz, Defending History editor and former Vilnius University professor of Yiddish, at an evening reception for conference participants hosted by the Jewish Community of Lithuania.

It is only natural that a first conference of this type would provide lessons and thoughts for the next event. The major regret from Defending History’s point of view is that members of the Jewish community of Lithuania who have voluntarily dedicated decades of their lives to the very Yiddish culture for which the Yivo was founded were not invited to speak. Among those the organizers might do well to consider for the next event are librarian Polina Pailis who has voluntarily been creating monthly low-tech but high-culture bilingual Yiddish-Lithuanian cultural exhibits at the Jewish community’s premises at Pylimo 4 (no such display in Yiddish exists in any other East European Jewish community — Vilna has retained its own Yiddish corners without any outside support). For many years previously, Ms. Pailis acted in the Vilnius Yiddish Folk Theater and is one of the unsung Yiddish heroes of the city. This month’s exhibit (her 107th consecutive monthly exhibit!) was specially dedicated to Yivo and intended to honor the delegates and guests, but most were not even informed of its existence, and it was not mentioned in any program or on the Jewish community’s website. 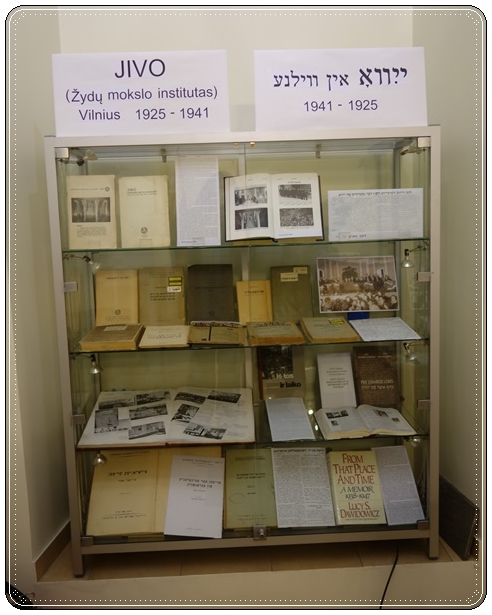 Librarian Polina Pailis’s monthly exhibit at Jewish community headquarters was dedicated to Yivo and intended to honor the delegates and participants. Unfortunately, virtually none knew of its existence.

Other living pillars of Yiddish culture in the city include Rachel Kostanian, longtime director of the Green House (Holocaust museum) which includes a room dedicated to Vilna Yiddish culture that of course cherishes Yivo, and houses the old bust of Yivo founder Dr. Tsémakh Shabad. Ms. Kostanian always ensured the inclusion of Yiddish titles throughout the Green House during the years of her directorship. Her book Spiritual Resistance in the Vilna Ghetto (Vilnius 2004) is widely acclaimed for bringing to the world’s attention the vitality and productivity of Yiddish culture even in the midst of ghettoization and in the face of death.

Milan Chersonski, a staff member at Defending History, was for decades director of the Vilnius Yiddish Folk Theater and for a dozen years editor of the Jewish community’s quadrilingual newspaper Jerusalem of Lithuania. It always included fully equal text in Yiddish. Roza Bieliauskienė, teacher at the Sholem Aleichem School and former museum curator who has been teaching Yiddish in various capacities for many years is an accomplished historical guide, researcher and translator of Yiddish. Irina Guzenberg and Genrich Agranovski are specialists on Vilna Jewish addresses including the fascinating local urban cultural geography of the Yivo’s founders and leaders. Jewish community members consulted felt that there was a strong and regrettable tendency to exclude treasured Jewish cultural specialists who are “not part of the political clique” of government-sponsored endeavors on Jewish issues usually led by non-Jewish specialists with little relationship to living Jewish people in the city.

There was an extended quote at the conference from former Yad Vashem director, Holocaust survivor and scholar Yitzhak Arad about the importance of Yivo’s digitization project. But some felt that mentions of Dr. Arad’s kind support perhaps need also to take note of the ever more pressing need for Lithuanian state apologies to him and other defamed Holocaust survivors who are routinely referred to as “war criminals” in various works of history. In the case of Dr. Arad (whose own views have been very clearly stated), there is still defamatory material about him on government websites. The urgent need for apologies to defamed Holocaust survivors is one of a number of irksome Lithuanian-Jewish issues that could be rapidly solved by good will.

The conference was followed by a reception at the Lithuanian Jewish Community led by deputy chairperson Masha Grodnikienė, with her usual grace, style and multilingual abilities. Among the entertainers featured was the beloved Vilnius violinist Boris Kirzhner.

At the reception, one of the visiting Yivo staff members asked Fania Yocheles Brantsovsky what more the Yivo could do in Vilnius nowadays. Ms. Brantsovsky replied that there are still elderly Jews who have a lot to transmit to young people about prewar Yiddish and its culture and schools but few seem to be asking, and with the survivors in their eighties or nineties, time is rapidly running out.

Ms. Brantsovsky added that she was absolutely thrilled to have lived to see a 90th anniversary conference of Yivo that included four lectures in Yiddish. 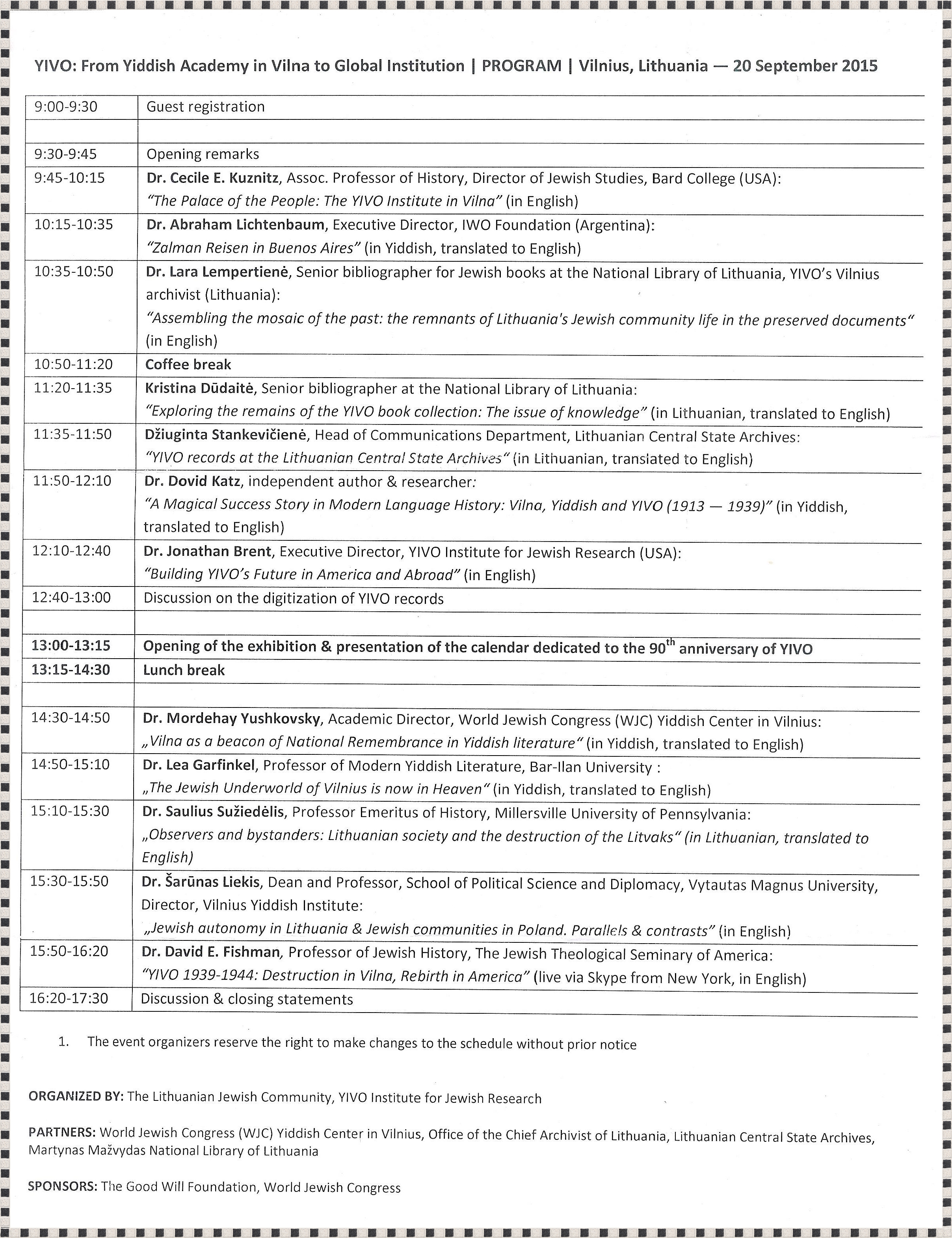