In response to several requests from the United States, DefendingHistory.com this week asked three colleagues who found themselves in Vilnius, the Lithuanian capital, to try to see the “Flame of Hope” monument, by sculptor Leonardo Nierman, in memory of the victims of the Lithuanian Holocaust, located in the heart of the Old Town, in a yard that was in the Vilna Ghetto between September 1941 and the ghetto’s liquidation three years later.

The story of the monument got underway nearly thirty years ago when the idea first came to the person who made it happen, Shelly Rybak Pearson of Florida, USA, who contributed a DH.com comment piece on the subject last December.

As a result of this article and the ensuing protests in the United States, a visitor’s plaque with instructions for viewing the monument during office hours (with entry from another street altogether) was added on the facade of the Youth Theater. DefendingHistory.com was pleased, as always, to supply and proof the Yiddish text through to production of the excellent trilingual plaque (English-Lithuanian-Yiddish). Compliments to city authorities!

The seemingly interminable saga has been reported by a number of American media outlets, including a feature article in the Palm Beach Post and a television interview for the Miami Herald. For many years, the Lithuanian Embassy in Washington DC and the American Embassy in Vilnius have participated in the conversation concerning the monument. Discussions in different periods have dealt with agreeing upon a text for the inscription (see box at the end of this article), the venue for the monument, and above all — accessibility of the monument to the general public, Lithuanians and foreign visitors alike.

What is agreed by all sides is that the monument is located in the courtyard of the building that housed one of interwar Vilna’s prime Jewish educational institutions, the Yídishe reál-gimnàzye. During the Holocaust, the building tragically became the headquarters of the Nazi-established Judenrat, or “Jewish authority” within the ghetto. Like the other ghettos in major Lithuanian cities, the Vilna Ghetto continued to incarcerate the shrinking remnant of Lithuanian Jewry for several years after the majority were shot in the summer and fall of 1941, mostly by local perpetrators volunteering to kill the civilian Jewish population for the Nazis, at hundreds of mass grave sites across Lithuania.

One of the accounts, accompanied by images:

I approached the main entrance of what had been the Yiddish school and then the Judenrat building on Rūdininkų [Yiddish: Rudnítsker gas] and was happy to find that the large gates were wide open. 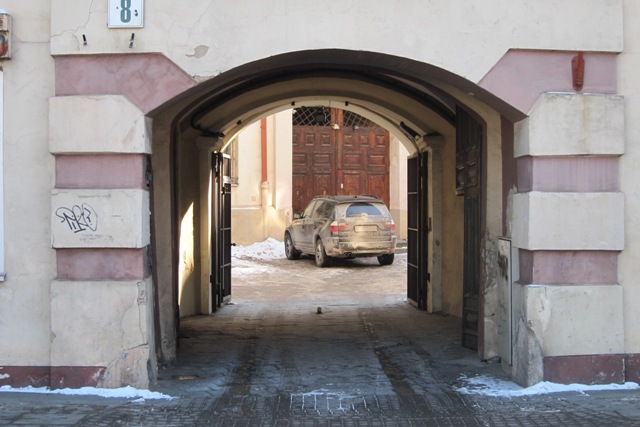 I walked in to a large courtyard where I thought I’d see the monument right away. Surely this is the right place, the courtyard in front of the building it is supposed to be associated with. But the courtyard just sported an empty snowed-over lawn with some wild brush growing. No monument. A perfect place for the monument! Why isn’t it here? 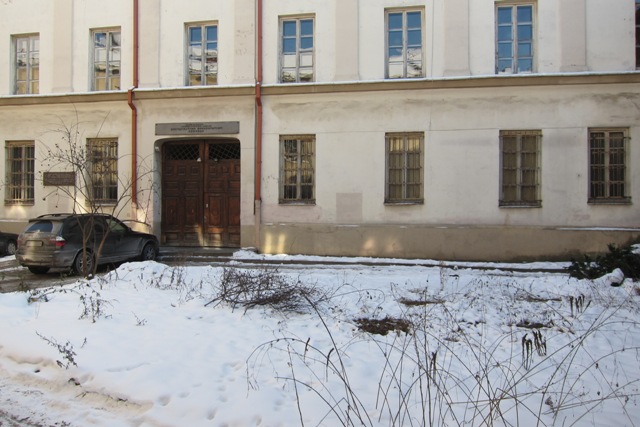 I then walked up to the front of the building, which now houses a museum restoration center [the Pranas Gudynas Center for Restoration at the Lithuanian Art Museum] but its doors seemed locked shut with security cameras so I didn’t think of trying to get in. [Note: One of the would-be monument-viewers did achieve entry, only to be told that to see the monument they had to “go around the block and gain entry through the theater on Arklių Street.”] 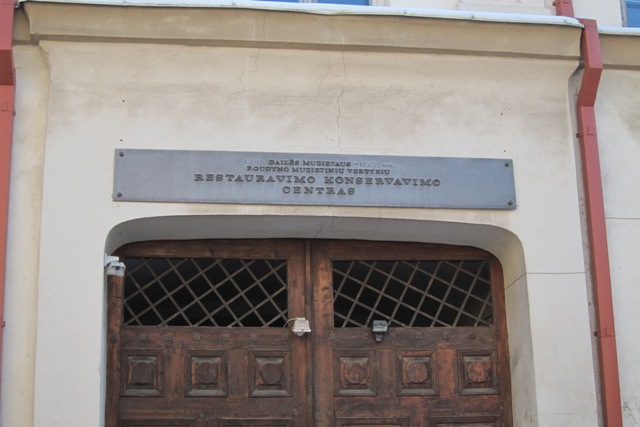 I had been told there might be a way in via the entrance to a theater. So I walked around the corner into the main street and then turned right again into Arklių Street to hopefully find myself on the other side of the right courtyard with the actual monument.

I was happy to soon see on the right hand side the Vilnius Lėlė Puppet Theater [home of the Jewish ghetto theater during the Holocaust; before the war the Máydim marionette theater]. Parents with their children were entering, so I also entered. 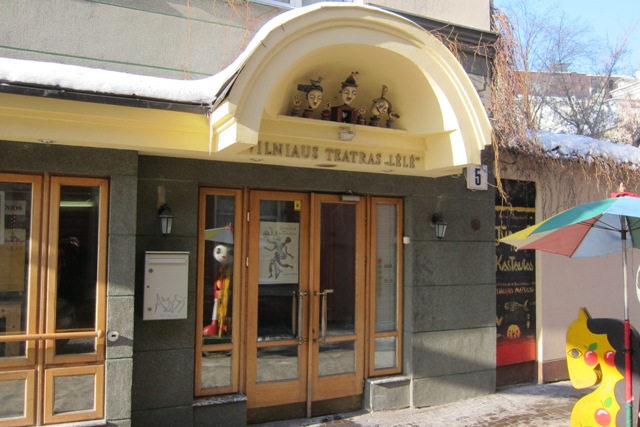 I waited on two longish lines, first in the line for hanging up coats, and then at the box office. There were happy parents and children on all sides. When my turn came, both polite ladies looked at the piece of paper I had with the name of the monument, and after an initial puzzled look, explained that the entrance was no longer through this theater but rather through the next theater a little ways down the same street.

And just a little ways down, indeed, I came to the second theater, which had a clear sign that read JAUNIMO TEATRAS [the State Youth Theater]. 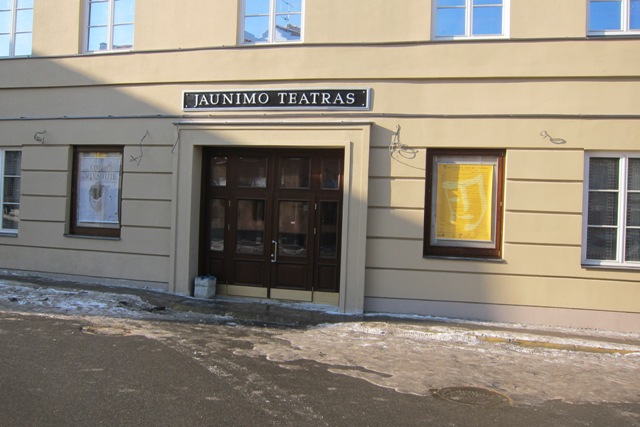 But the doors were locked and there was no sign of life. There was no little sign like you sometimes see with mention of a monument to be seen in the courtyard. But finally I realized that the large yellow poster in a glass frame to the right of the theater doors had a schedule of forthcoming performances. If I could struggle through the text, entirely in Lithuanian, made harder by the shadow falling on the left hand side with the dates and times, and find a performance that coincides with daylight, and they would let me in through their back yard to the area with the monument, that might solve everything. 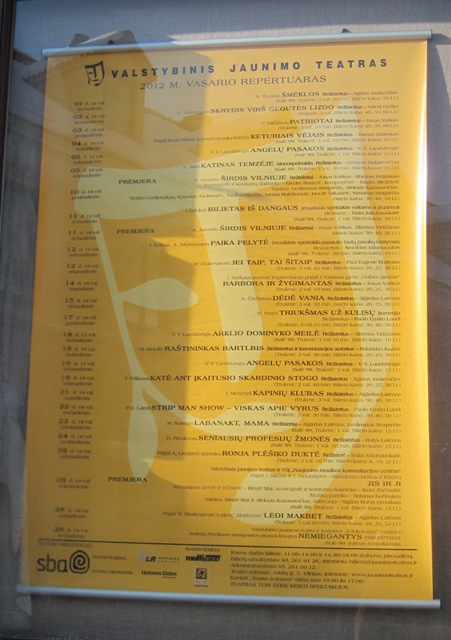 But my schedule is tight and it will have to wait for the next trip.

Who knows, maybe by then, there’ll be a miracle, and the monument will move one courtyard over into the one that’s open to all and just off the main street? Or even onto one of the ample empty areas outside, visible right from the street, like all the other monuments in town?

A Tale of 3 Inscriptions on the Hidden Monument of Vilnius

I. Proposed by the Donors:

II. Agreed by the Lithuanian Embassy in Washington:

“Flame of Hope. By Leonardo Nierman. This memorial has been erected in the yard of the former Judenrat (Vilnius Ghetto Council) to remember more than 90% of Lithuanian Jews murdered in 1941-1944 and in the hope that never again such horrible crimes shall be repeated on earth.”

III. Actually inscribed on the monument:

“Here, on the site of the former Judenrat (Vilnius Ghetto Council), we remember thousands of murdered Lithuanian Jews and say: This should never happen again!”