BROOKLYN, NEW YORK—The Central Rabbinical Congress (CRC) of the U.S.A. and Canada today released to the media the facsimile of the original Hebrew letter it has issued concerning plans for a convention center at the old Vilna Jewish cemetery at Piramónt, now in the Šnipiškės district of modern Vilnius, the capital of Lithuania (background; the paper trail to date). The facsimile is followed by an English translation provided by the CRC. 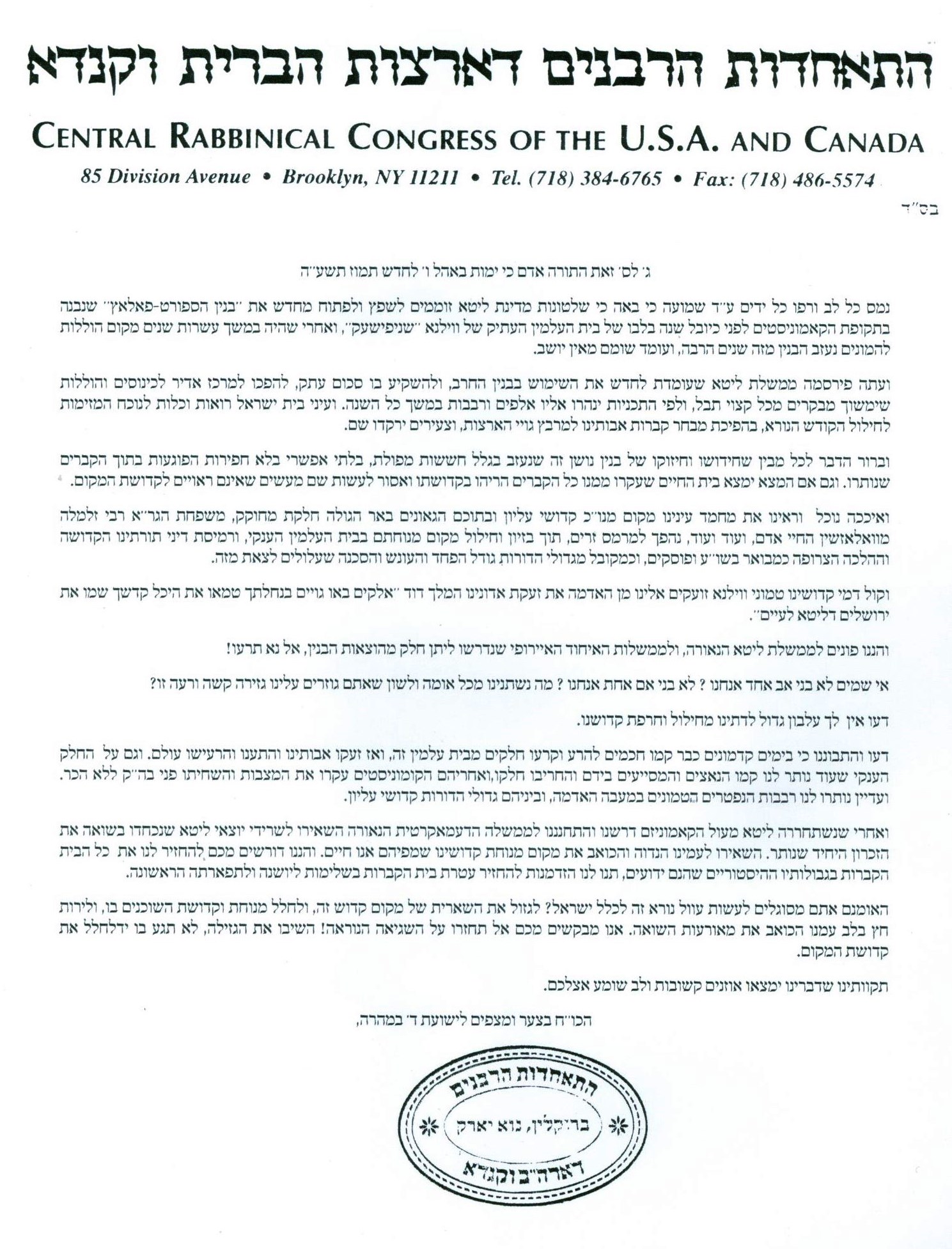 We are all terribly shaken up to hear the reports that the authorities in Lithuania are planning to renovate and reopen the “Sport Palace Building” that was built during the communist era, approximately fifty years ago, in the heart of the ancient “Shnipishik” cemetery in Vilnius. After decades of being a place of entertainment for the masses, the building was abandoned for many years, and is left desolate.

Now, the Lithuanian government has announced that it intends to again put the derelict building to use, and invest a vast amount of money in order to turn it into a huge center for gatherings and entertainment, that will attract masses from across the world. According to their plans, thousands and tens of thousands will stream to it throughout the year. All of world Jewry is distressed to see such a horrible desecration; the choicest graves of our forefathers being turned into a playground for the nations of the Earth—and youths will frolic there!

It is very obvious that renovating and renewing this old building, that was abandoned due to concerns of structural weakness, is impossible without excavations that will touch the remaining graves. Even if there is a cemetery that has had all the graves removed, it still retains its sanctity, and it is forbidden to do things there that are inappropriate for the holiness of the place.

How could we ever stand by and see such a treasure of ours, the resting place of such holy people, including the greats Be’er Ha’Golah, Helkas Mehokek, the family of the GR”A, Reb Zelmele of Volozhin, the Haye Adam, et cetera, being trampled by strangers, while disgracing and desecrating their place of rest in the huge cemetery, and with absolute disregard of the laws of our holy Torah and the pure Law, as delineated in Shulchan Aruch and arbiters of the Law? We have a tradition from the great people of the past generations, about the great torment, punishment, and danger, which can come out of this.

The voice of our brothers, the holy people interred in Vilnius, scream out to us from the earth, the scream of our master, King David: “O God! Foreign nations have entered into your estate, defiled your holy sanctuary, and laid Jerusalem of Lithuanian to waste!”

We turn to the enlightened government of Lithuania, and to the government of the European Union, who were asked to contribute funds towards the building expense, and say: Please Brothers—do no evil!

O Heaven! Aren’t we all children of the same father and mother? Why are we different than every other nation, that you decreed such terrible things against us?

Know! There is no greater desecration to our religion that defiling and disgracing our saints.

Know too and consider, that in the past evildoers destroyed parts of the cemetery. At that time, our forebears prayed, fasted, and shook the world. The Nazis and their minions then went and destroyed a portion of the large part that still remained. After that, the communists uprooted headstones, and ruined the appearances of the cemetery, so that it became unrecognizable. We still have tens of thousands of deceased buried deep in the ground—among them great men and holy saints.

After Lithuania was freed from the communist yoke, we requested and begged from the democratic, enlightened government: “Please leave the only remaining memory for the remnants of Lithuanian Jewry, who were decimated in the Holocaust!” They left our broken and hurting nation the resting place of our saints, who enlighten our lives.

We hereby request from you to return the whole cemetery, according to its known historical borders. Give us the opportunity to completely restore the glory of this cemetery to its original greatness.

Would you really do this terrible crime to the Jewish nation? To steal the remnants of this holy place, and desecrate the rest and sanctity of those who rest therein, and to shoot an arrow into the hearts of our nation, who are still hurting from the wounds of the Holocaust?! We request from you: Don’t repeat this terrible mistake! Return what was stolen, and let no hand defile the sanctity of the place.

It is our fervent hope that our words find a receptive audience.

Written and signed, in pain, by those hoping for the speedy salvation of God,