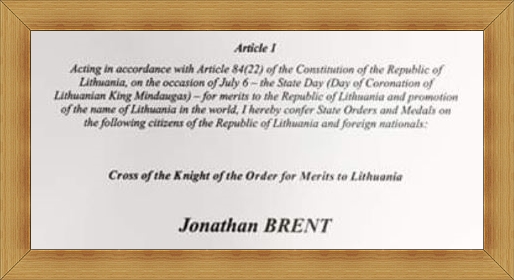 As for teaching of the living Yiddish language, literature and culture, not a penny of the millions raised by Yivo has gone into the smallest class. Conversely, Yiddish teaching and study continue in the city despite the campaigns of personal  exclusion and defamation by those enabled and directed by Yivo.

Defending History has been following events since 2011, when a gala event on the Vilna Ghetto invited as guest of honor a foreign minister called out for his overt antisemitism by the Jewish community, through recent weeks, when the director of Yivo, Dr. Jonathan Brent, was duly awarded his knighthood. Never once has Yivo invited to New York the Vilna Ghetto Holocaust survivors Rachel Margolis and Fania Brantsovsky, whose families have still not  received apologies for the state-run campaigns to characterize them as war criminals in the history books and on the web, in virtue of their having survived the Holocaust by joining with the anti-Nazi partisans who were the only force in Lithuania seriously fighting the Nazis during the genocide.

This Thursday’s event, cosponsored by the Lithuanian consulate in New York, follows the usual pattern (scroll through the history for examples) of having one genuine Lithuanian hero who has stood up for the truth and has little idea that (or how) he is being manipulated. This time it is the great Lithuanian-American  humanist, writer and professor Tomas Venclova. The Yivo program lists the title of his September 5th talk as virtually identical with his 2015 publication in Defending History: “Lithuanians and Jews: What’s Changed and What Hasn’t over the last Forty Years?” It was based on a Vilnius conference paper he read, on a podium he shared with Defending History staff, whom he entrusted with the translation to English (see also his DH section, also the DH editor’s lecture at the same conference).

Then there is Professor Saulius Suziedelis, a most serious scholar who is also a top PR operative, especially for American Jewish audiences, on behalf of the state’s “red-brown commission”. Alongside much genuine and valuable history, his English lectures habitually call the notion that Lithuanian Jews were largely killed by people from their own towns and cities a “Holocaust myth” and they regularly trash Jewish scholars who hold other opinions (“Karen Sutton doesn’t even know Lithuanian”; “Yehuda Bauer’s Russian is very poor”). There is frequent disrespect toward the scholars and survivors who have documented massive violence, humiliation and murder in multiple locations prior to the arrival of actual German forces in the week of 22 June 1941.

Lithuania’s current culture minister, Mr. Mindaugas Kvietkauskas, is perhaps the star of the show. A Yiddish translator who is reported to be “afraid to even say hello in public” to any of his own erstwhile Yiddish teachers in Vilnius, he helps orchestrate events that systematically and wholly exclude scholars, among them local Holocaust survivors, who have dared express a second opinion on Holocaust matters. He may well go down in history as the primary case of state abuse of the stateless Yiddish language for Holocaust history related PR on behalf of the new ultranationalist far right. For the most recent caper, see the final section of a report on the early August 2019 conference that coincided with an antisemitic demonstration glorifying Holocaust collaborators, as a result of which the Jewish community closed down its premises and the one functioning synagogue in Vilnius. The conference, underway the same day,  issued no statement of support for the community against the painful antisemitic onslaught. Would it have embarrassed the culture minister to speak out with integrity and dignity? Incidentally, there was a time, before Mr. Kvietkauskas became a politician, when he was proud to publish interviews with his old Yiddish teacher, Dovid Katz, in prestigious Lithuanian literary journals. No more, Joe…

And, of course there is the Lithuanian government’s longtime leading American Jewish star public relations asset, the AJC’s Rabbi Andrew Baker, who has publicly trashed the 46,000 people who have signed a petition asking for Lithuania’s new national convention center project to be moved to another venue, away from the old Vilna Jewish cemetery. Naturally, he too, with no claims to being a historian, is a member of the state’s red-brown commission that helps disseminate the Prague Declaration that promotes the “equality” of Nazi and Soviet crimes. The commission’s official name is the “International Commission for the Evaluation of the Crimes of the Nazi and Soviet Occupational Regimes in Lithuania.” Rabbi Baker has received various Lithuanian government medals and ribbons for his dedicated PR efforts. Survivors in Vilnius report that never once has he even met with them.

Attending Thursday’s event in New York City can provide a rare opportunity to see how some sections of some East European governments have morally “taken over” weaker and purpose-seeking Jewish institutions in the United States and other Western countries.

There is moreover, something special this time. Usually, such events include at least one supposed “representative” of today’s Lithuanian Jewish community. In recent years, it has been Ms. Faina Kukliansky, who herself received a state medal after “making kosher” one alleged Holocaust collaborator who was recently honored by a monument in Chicago (!), but then, this past summer, fell out of favor with some government circles, after standing up courageously and boldly to the government on the issue of a more notorious Holocaust collaborator. Simon Gurevich, the democratically elected chairperson of the Vilnius Jewish Community, representing the vast majority of today’s Lithuanian Jews, has never been invited by Yivo. Would Yivo’s New York City constituency not be interested in what he has to say too?