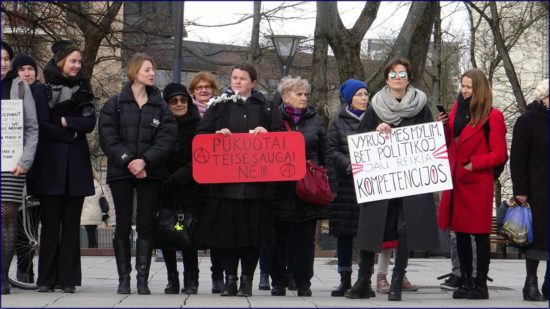 And it can happen, on occasion, that women in power do not do much for feminism or even work against it. Then, the popular reaction is “What else do you want? Here, see, these women are in power!” In other words, the struggle in Lithuania is over and we should be happy with what we have.

Sadly, women’s protests do not gather much attention in Lithuania. And those women who do protest for their rights are rewarded with rebuke and contempt.

In 2019, women organized the 8th of March demonstration, the main slogan of which was “All Women Work, Not All Get Paid”. We asked, rhetorically, what the society would look like if women only did 86 percent of their work, only the part that they get paid for. Women, after all, usually work in services, education, and healthcare, they are cashiers, schoolteachers, cleaners, secretaries, nurses, personal assistants, kindergarten teachers, social workers, obstetricians, receptionists… Their work is socially essential, but at the same time it is normal to think that it is OK to pay them less. Furthermore, after their day job is over, women go back home to work as mothers and housewives, since child-rearing and housework are traditionally assigned to women, most of whom in the post-Soviet countries simply work this double shift. On average, a woman in Lithuania spends 20 hours a week shopping, cleaning, and taking care of children—working without pay or appreciation.

We can also add violence and harassment that some women experience at work to the mix. In last year’s march, I carried a banner that said “No to Fluffy Law Enforcement” (“Pūkuotai teisėsaugai – ne”), to remind everyone of the case against the influential businessman and harasser Kęstutis Pūkas, (a wordplay on Pūkas’ surname, literally meaning “fluff” in Lithuanian). He won he won in the court of first instance. He sexually harassed several women during job interviews, which took place nowhere else but in the Seimas (which is the institution of supreme authority in Lithuania). A court of first instance acquitted the Member of Parliament, and it took a long while before he was sentenced by the Supreme Court (Delfi’s report).

And if it had not been for social pressure and (in)famous names, a case like this would most likely have remained in state attorneys’ drawers and would have never even reached court…

On March 8, 2020, feminists were marching with a different slogan but with the same problems.

“Keep your tulips, we want rights”, chanted the women, accompanied by “Bomba Feminista” drums (Women in post-Soviet countries are (still) traditionally presented tulips on the 8th of March by men). The march took place in Kaunas and, due to the pandemic, did not attract crowds. However, it was nevertheless in its own way spectacular and inventive, incorporating dances and music, and managed to attract media attention. Alas, celebrations and marches come and go, and the overall situation stays the same. Or, if it changes for the better for women, it does so very, very slowly. 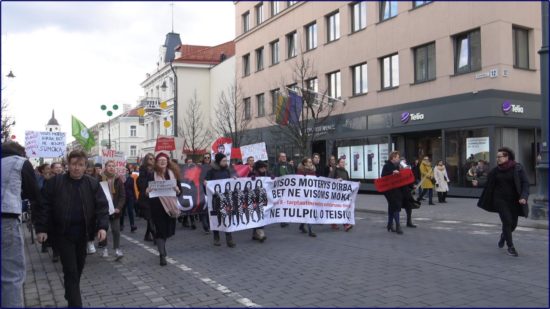 Women’s Day March in Vilnius, March 8, 2019. The main banner reads “All Women Work, Not All Get Paid. 8th of March, International Day of Women’s Solidarity. Keep Your Tulips, We Want Rights!”

And we continue to live in a society that spends thousands of public euros on men who play basketball but does not manage to find money to pay female nurses during the pandemic. 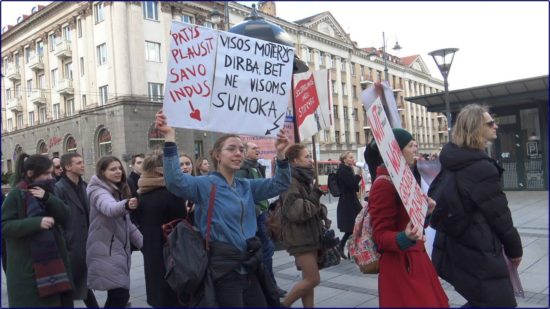 Women’s Day March in Vilnius, March 8, 2019. Banner in front reads “Wash Your Own Dishes. All Women Work, Not All Get Paid”. Distant banner on the right reads “Solidarity Is Our Strength”.